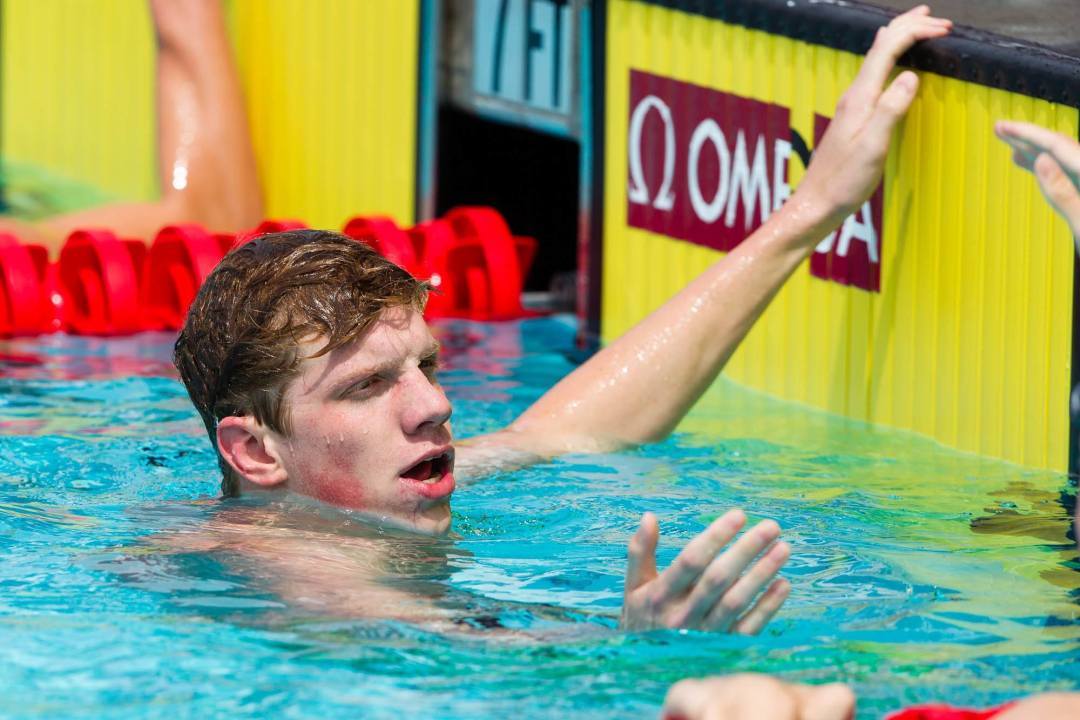 With just over two weeks to go before the early signing period begins for swimming recruits seeking National Letters of... Archive photo via Tim Binning/TheSwimPictures.com

With just over two weeks to go before the early signing period begins for swimming recruits seeking National Letters of Intent (November 12th-November 19th), only four of SwimSwam’s top 20 male and female recruits in the class of 2015 remain publicly uncommitted.

Two of them, #2 women’s recruit Abbey Weitzeil and #7 men’s recruit Cole Cogswell, are teammates at the Canyons Aquatic Club. Those two, we know, were scheduled to take trips this past weekend to nearby USC. Weitzeil is the best sprinter coming out in the women’s class, with yards bests already of 47.59 and 21.98 that would put her in A-Finals (and challenge for titles) in NCAA’s.

The other publicly uncommitted male is #2-ranked Townley Haas, a very versatile freestyler who ranges from a 43.8 100 freestyle up to a 14:59 mile. He’s Tweeted pictures on his trips to Georgia and USC.

We do know that at least one of the above has committed verbally, but that swimmer is opting to not make his/her decision public until signing a letter of intent, which will leave a little excitement for the actual signing day.

Among those who have committed from our top 20, the tallies:

The Pac-12 women have hauled in the majority of the top 20, with 13 out of the 18 committed thus far going to the west coast. Note that the two-time defending NCAA Champions from Georgia don’t have verbals from any of the top 20 recruits – though they did well enough in recruiting in the last two years that they won’t exactly be hurting.

On the men’s side, there’s still a heavy Pac-12 bias, with USC, Cal, and Stanford combining for 8 of the 18 committed, however on the men’s side there’s quite a few destinations that are off of the beaten path as compared to the women’s side, including three who committed to teams that placed 30th-or-lower at NCAA’s last year.

Thanks. Will be interesting to compare when those guys are all seniors rather than freshmen. And to include conference championship impact as well – or NCAA meet qualifiers but not scorers as a fair proxy. If a guy is finishing 17th in three events it is hard to believe in hindsight he was not a top 20 prospect as there are probably at most five guys in his class that are faster

And just a caution to all that even SwimSwam rankings came out before Summer Championships and a lot of kids not on the list performed better than some kids on the list.

At the end of the day the most interesting list is the coach priority as well as his sleepers that he thinks are a steal that he can develop.

Would be fun for SwimSwam to compare the top 20 individual senior scorers at NCAAs this year to how you ranked them in early summer between their junior and senior year in high school.

SwimFan- we did something very similar to your idea back in April, right after the NCAA Championships. As SwimSwam has only been around in its current form since 2012, the farthest back we can go with our own recruiting rankings is the class of swimmers who were high school seniors in the fall of 2012. That group is currently just starting their sophomore years of college.

We looked at our top 10 prospects for hits and misses, plus freshman NCAA point-scorers that weren’t ranked. You can find the stories at these links:

I’d rather put my money on Haas having already verbaled to Georgia 😉 Lots of room over there this year so no pressure to announce any earlier than the official deadline. Or perhaps he’s waiting for the dust to settle on the JB case…

Who is ahead of Ledecky? And why she is only ranked #7? What a joke College swimming is a joke. No wonder why Phelps never tried competing in college.

Everybody seems to be very upset about the College Swimming rankings, did anybody bother to click the ‘how are these rankings calculated’ button? It is based off of your supposed five fastest events with an algorithm but you can also enter your own times. It works very well for general rankings but when you’re ranking tens of thousands of high school swimmers do you really expect humans to go through and rank that many people?

Swimswam and College Swimming serve different needs with their respective lists and there is more than enough room for both. For example on the men’s side, both Mulcare is ranked ahead of Seliskar, but only because both of their ‘power index’ is 1.00 and… Read more »

that’s all fine as it’s like trying to compare apples to oranges. both sites are great and must-go-tos for the swimming community. but when it’s being said that coaches go to one for their recruiting whereas the other system’s more geared for the fans, it makes me wonder a little if coaches should really rely on the machine algorithm when the stats entered into its calculations seem wildly inconsistent and vary so widely between individuals?

No coach relies on their recruiting algorithm. It’s a database full of times and contact info. That is valuable in recruiting.

Braden,
Other than your top 10 from 2013, I can’t find your high school recruit rankings.
Can you direct me?
BTW, I did already use the search link.
Thx

Will be so amazin for Weitzeil to win the national title for the next 3-4 yrs alongside superstars Katie Ledecky, Simone Manuel, Janet Hu, Ally Howe, Ella Eastin & Leah Stevens!

If not then Arizona would be their 2nd best choice. Until the Bauerle situation’s clarified, honestly doubt most would want to commit to Georgia right now.

USC might have a chance being local to both of them. But if academics are equally important to them as the swimming is, then Stanford’s the logical choice!

Hate to burst your bubble my friend but I don’t think Stanford was ever on Abbey’s short list. BTW Stanford isn’t the only institution of higher learning with a scholarly reputation in town. Check here where Harvard MIT & Cal are ranked higher! http://www.usnews.com/education/best-global-universities/rankings