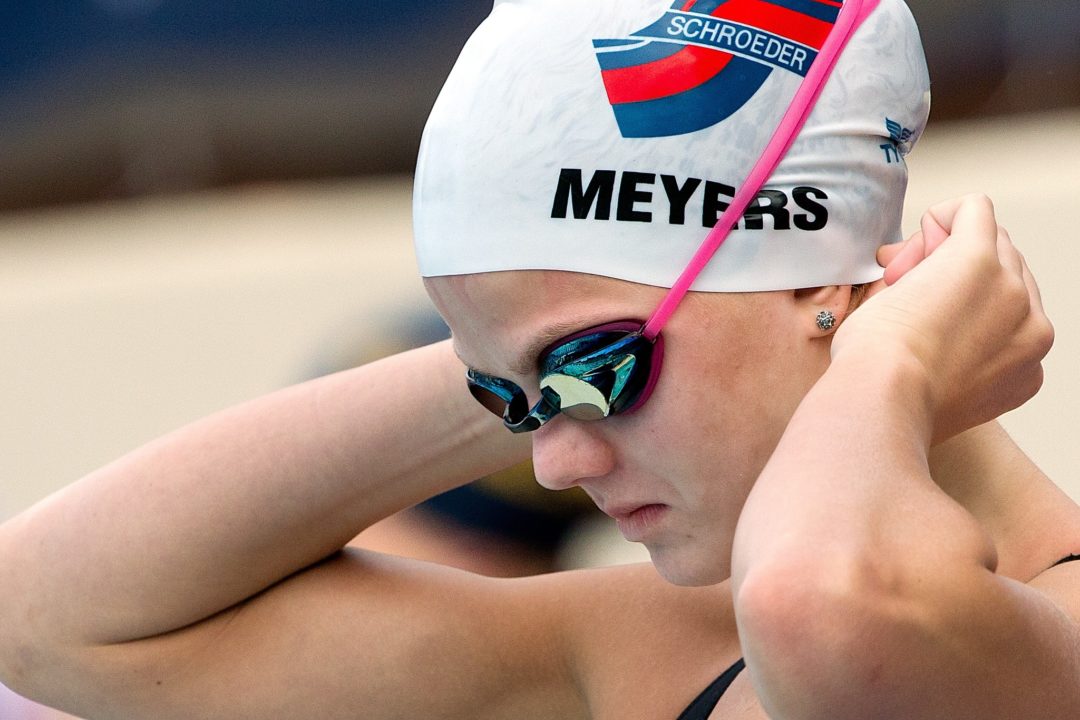 In a recent revelation in American junior swimming, Alexandra Meyers of the Schroeder YMCA has committed to Stanford according to her coach Dave Anderson: giving head coach Greg Meehan yet another spectacular piece for his recruiting class that comes to campus in the fall of 2014.

Meyers is a member of the USA Swimming Junior National Team and swam a the 2013 World Junior Championships, where she won a bronze in the 400 free relay by splitting a 56.34 in the 3rd leg of finals.

The rest of the country is now playing catch up in this recruiting class, and even with two months to go before the early signing period opens and these high school seniors can make their decisions official, it seems nearly impossible for anyone to surpass this Stanford class.

It looks like they had much money to spend at Stanford.
Impressive recruitment!
But it’s perhaps not finished!
Do they have still enough money to pick Simone Manuel?
Wow! It would be huge for Stanford and Miss Manuel!
She would have a great training partner with Lia Neal.

bobo – if they got Simone Manuel on top of this class….then it’s game over.

Do you really believe it would be game over even against a blockbuster team like Cal? With Missy Franklin, Elizabeth Pelton, Rachel Bootsma, Cindy Tran, Marina Garcia, Celina Li, Farida Osman, Rachael Acker, Kristen Vredeveld? Most of them are world class swimmers. I think there would be match until 2015 when Missy will go pro. Then, yes, it would be big advantage to Stanford.
Anyway, both teams will dominate for a long time.
While Cal and Stanford recruit big names after big names, it looks like other college places sleep a little in comparison.

If NCAA raced LCM, then I’d agree w/ you Bobo Gigi. But SCYs has a way of equalizing things a little bit, IMHO. I don’t see CAL running away with it this year, it will be closer than many people think.

Bobo, If three out of five relays were backstroke, CAL definitely has the edge. However, Stanford is assembling some powerful freestylers with speed (Maddy S., Janet H, Lia N, and then Simone M or Lindsey E.). They win the 200 free relay, and I would put my money on them for the 400 free relay. The 800 free relay would be interesting.

Next year I think it is still Cal and Georgia. The following year could be really interesting.

I think it’s a little crazy when people have this “backstroke blackout” over Cal. Each of their great backstrokers excels at a minimum of 1 other stroke. You could take Franklin, Pelton, Bootsma, and Tran out of the 100 back and still have Au and Klaren (51.8 / 52.1)

Between Franklin, Pelton, Breed, Piehl, & Acker the 800 is over.

But in 2015 Stanford will be bringing it. (Why did you include Simone Manuel for Stanford?)

It was just an assumption on my part for Miss Manuel at Stanford. It would be a great place for her with Lia Neal as training partner. And Stanford looks on fire about recruiting so why not pick her too?

Way too early to assume about Manuel. While Stanford would be a great fit, there are a lot of great programs out there where she could continue to improve her sprinting and have a great college career.
Does anyone know how Academic Simone is? That’s one that that could either push her towards Stanford or exclude her.

Maybe, Texas in the next recruiting class for 2015 will get either Baker or McLaughlin or Eastin for the 2015, so other schools can be a threat. as well in the future..

Kathleen Baker will most likely go to a SEC school like Tennessee. Texas has a lot to prove with new coach.

Maybe, but there are at least 3 great nearby options to pass over in California for OC based Eastin and McLaughlin before you have to get on that 3 hour flight to Austin. So I’ll speculate that UT might be a stretch unless these ladies already have some previous connection to Texas, the school, or the coaching staff.

The Eastin sisters go to the same high school as Lindsey Engel and are reportedly very interested in Stanford.

Ledecky is in 2015 class. Will be game over whoever gets her. Or is she going pro?

Unfortunately she goes to college. She has said it recently.
http://www.usaswimming.org/ViewNewsArticle.aspx?TabId=2049&itemid=5501&mid=10503
I say unfortunately because it’s very dangerous in purely sports terms. She has already changed her coach last year and fortunately, it has worked very well with Mr Gemmell. No reason to change after her amazing world championships.
But at the same time, I also understand the academic reason.

I’m a big fan of higher education and college swimming, but I don’t get the logistics of Ledecky and NCAA swimming, especially in 2015-2016. Doesn’t make sense for her to train SCY through March 2016 and then shift to LCM three months before Olympic Trials. Makes sense for her to continue current training and maybe attend Georgetown for a year or for her to redshirt and train LCM exclusively as a freshman, but trying to swim for a college team and train for the Olympics with a brand new coach in the same year doesn’t seem very feasible.

As you said, in my opinion, it would serve her better if she goes pro, attend Georgetown and continue training with Gemmel.