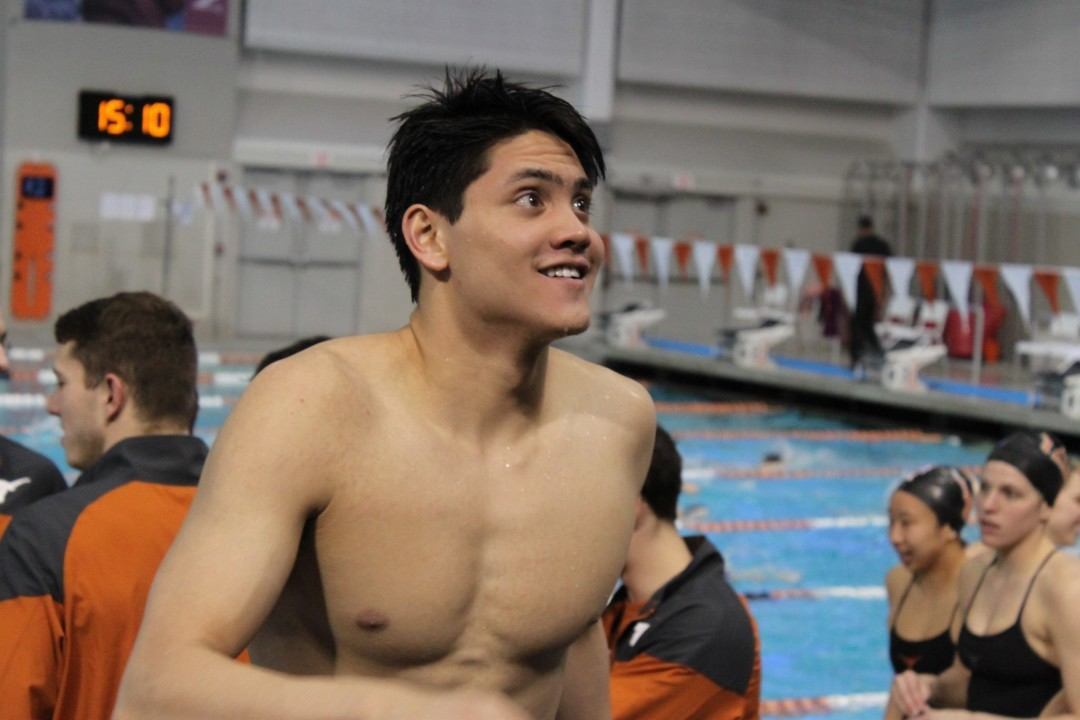 Singapore national swimmer, Joseph Schooling has been named 2014’s “The Straits Times Athlete of the Year” this week.  In its... Archive photo via Andy Ringgold/Aringo Photography

Singapore national swimmer, Joseph Schooling has been named 2014’s “The Straits Times Athlete of the Year” this week.  In its seventh edition, the award is presented by the Singapore Press Holdings’ daily news publication, “The Straits Times”, to honor athletes whose performances had the most impact over the past year.

Singapore’s Minister for Culture, Community and Youth and Second Minister for Communications and Information, Lawrence Wong presented the award to Schooling’s parents in Singapore, as the University of Texas freshman was unable to attend the presentation.  Of Schooling, Wong stated, “Joseph is a very deserving winner because of his achievements that he had at the Asian Games and also at the Commonwealth (Games).  He truly embodies the spirit of the games.”

Schooling was also nominated for the award in 2011 and 2013, but there was no denying he had his break-out year in 2014 to stand alone as being worthy this time around.  At the Commonwealth Games last July, Schooling earned a silver in the 100m butterfly, setting a new national record in the process and marking Singapore’s first-ever swimming medal at those Games.  Then, at September’s Asian Games, Schooling brought home a gold, silver, and bronze in the 100m butterfly, 50m butterfly and 200m butterfly events, respectively, with his gold medal signifying the first earned by a Singaporean male swimmer in 32 years.

Of his performances, The Straits Times sports editor Mark Lim stated, “That Joseph’s accomplishments in 2014 stand out, even against a cohort of Youth Olympic, World Junior and Asian Games champions, speaks volumes of what he has achieved.”  Lim continued that, “We all felt he was destined for the bigger stage and he has proved that he does belong with the best this year, which is why he thoroughly deserves his award.”

For his part, Schooling says  “I’m really honoured. This is like the second biggest award after the Singapore Sports Awards, and I’m looking forward to doing Singapore proud at the SEA Games in June.”  Before that milestone, however, Schooling will be representing the University of Texas at the NCAA Men’s Championships March 26-March 28th in Iowa City, Iowa.  On American soil, Schooling most recently became the third-fastest University of Texas swimmer ever in the men’s 100y butterfly, as he clocked a 44.81 at the Big 12 Championships last weekend.