Jérémy Stravius Kicks Off Short-Course Season with a 47.88 100 Free 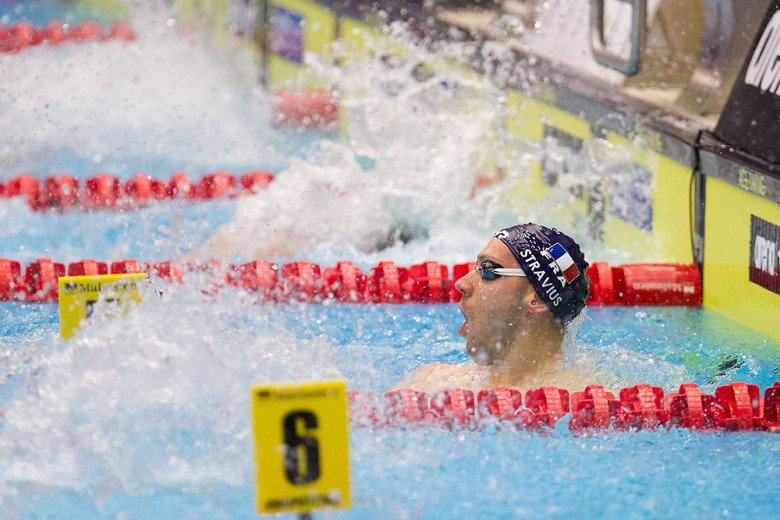 France's Jérémy Stravius got his short course season off to a strong start with a quick 47.88 win in the 100 SCM free at La Roche-Sur-Yon over the weekend. Archive photo via Jesper Nielsen | www.sttfoto.dk

A renewed and enthusiastic Jérémy Stravius competed at the regional short course (SCM) “Meeting Arena” in La Roche-Sur-Yon over the weekend, and got his 2015-16 season off to an excellent start.

After a disappointing World Championships last summer at Kazan, Russia, Stravius announced he would drop his signature 100 backstroke to refocus on the 100 free for Rio. Michel Chrétien, his coach since 2007, recounted at the recent Coaches’ Conference put on by the French Federation, that when Stravius first told him he planned to concentrate on freestyle, Chrétien asked him, “but have you seen the times?” (Note: we reported on how fast the French Federation made their Rio qualifying times here.) Stravius answered, “yes, it’s great! If I can go that fast I’ll be in a good position for Rio.”

Stravius took a step toward making that happen by posting a very solid beginning-of-the-season 100 free in La Roche-Sur-Yon. After a 48.87 in prelims on Saturday, Stravius came back to unleash a 47.88 in finals, winning by 1.5 seconds over his closest competitor. He was only .44 of his personal best, a 47.44 that dates back to the French Short Course Nationals in December of 2013. He also won the 50 back, going 24.44 in finals after a 24.89 in prelims.

At the end of the first day of the meet, Stravius wrote on his Facebook page he wrote that he had felt good about his first two races, and that they were an encouraging start to the season. He added, “Now I’ve just got the 100 breast and the 200 fly… it will be fun.”

Stravius is arguably France’s “most complete” swimmer, and he proved it this weekend by swimming several world top-10 times, virtually alone, at the beginning of the season, at a regional meet.

why is he not a very good short course swimmers??? he has some of the best turns i have ever seen!!