Lelliott, coached by Mark Skimming at Bath University, also cracked the World Top 10 on his way to the gold medal, with a winning time of 3.48.84. Current photo via Mike Lewis/Ola Vista Photography 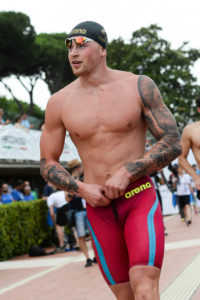 FINIS-sponsored swimmer Jay Lelliott finds himself on top of the podium at the World University Games in Gwangju, South Korea.

The 20-year-old, British-based distance freestyle specialist took to the water in the men’s 400m freestyle just 24 hours after picking up a silver medal and new English National Record in the 800m freestyle. This time, though, Jay went one better, taking the gold medal after a well-fought race with Australian Jack Mcloughlin.

The race came right down to the wire, with only 0.04 separating the two, but it was Lelliott who managed to get his hand onto the wall first. Lelliott, coached by Mark Skimming at Bath University, also cracked the World Top 10 on his way to the gold medal, with a winning time of 3.48.84.

“Jay is a fantastic talent and has proved it with such positive performances out in Gwangju. The World University Games always plays host to fast swimming and it’s great to see Jay’s hard work paying off. There is no doubt Jay can be amongst the medals again in the 1500m freestyle”

Jay will be back in action later in the week, where he will be looking to repeat his success in the 1500m freestyle.

Swimming News is courtesy of FINIS, a SwimSwam Partner.