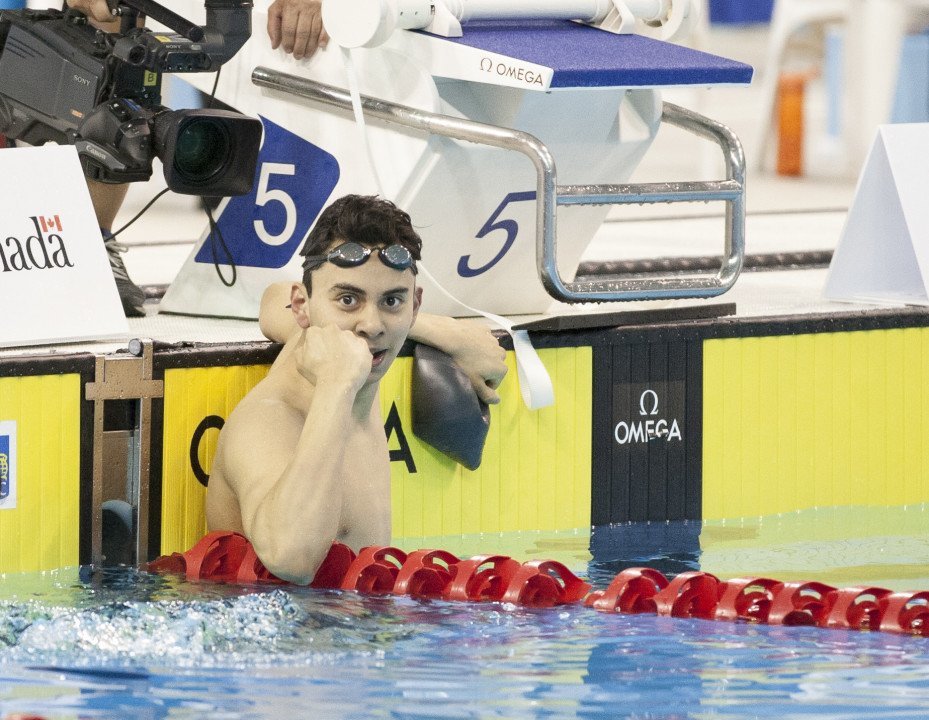 Javier Acevedo broke the Canadian 50 back record leading off the mixed medley relay in 23.58. Archive photo via Chris Tanouye

Canada’s Javier Acevedo led off tonight’s mixed medley relay in a time of 23.58, breaking the Canadian Record in the 50 back. The previous record had stood for 15 years at 23.90, posted by Riley Janes set at the 2000 NCAA Championships. Acevedo then tied that time at a time trial meet in December of last year.

Acevedo just missed the semi-finals in the same event this morning, clocking a time of 24.11 for 18th place. He led off the same relay this morning in 24.01. Canada wound up 5th in the final of the relay in 1:38.98, just five one-hundredths shy of the 4th place Chinese and half a second back of the bronze medal winners from Japan.

Someone needs to check the rules, but I think mixed relays openings aren’t allowed to count as records(It happened with Etiene Medeiros and Ryan Murphy before).

Fina may not recognize world records on mixed relay lead offs but it is each nations choice wether to accept a mixed relay time as official or not.

You are correct. Libby Trickett also broke 100 free WR in 52.99 in 2007 Duel in the Pool’s mixed relay, swimming next to Michael Phelps, but was not recognized by FINA.

Yes it was, just like in 2004.
Anthony Earvin breaking the 50m free WR in that NCAA was like an omen of what’s to come in Sydney a few months later.