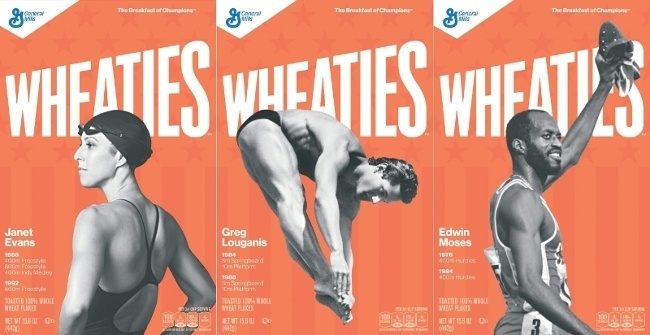 Four-time Olympic gold medalists Janet Evans and Greg Louganis will be featured on their own Wheaties Boxes starting in May. Current photo via Wheaties

Wheaties has recently announced that four-time Olympic swimming gold medalist Janet Evans, along with diver Greg Louganis and track and field athlete Edwin Moses, will be featured on their own Wheaties boxes coming out in May.

None of the three athletes have been featured on a Wheaties box before, as Wheaties looks to honor their gold medal performances from the past.

After a documentary was made about Louganis eight months ago a petition arose that he should be featured on a Wheaties box as he had never been before and now Wheaties has granted that wish. The petition garnered 41,000 signatures that petition creator Julie Sondgerath presented to General Mills.

Louganis has won four Olympic gold medals and one silver, to go along with five World Championship titles. He famously hit his head in the preliminary rounds of the springboard competition at the 1988 Olympics, going on to win gold in the event. After those Games Louganis revealed that he was HIV positive, adding to his legacy.

Also featured on one of the boxes will be Edwin Moses, who won two Olympic gold medals in the 400m hurdles in 1976 and 1984. He also won silver in the event in 1988. Moses was famous for winning 122 consecutive races and setting the world record four times in a span of ten years from 1977-1987.

This was waaaaay overdue for Greg. Congratulations, my man!

Is that a more recent picture of Evans? Interesting that they would not use one from when she used to be good.

G3, that’s seems such on odd thing to say. That does look like a current picture whereas the other two are not. This is 25+ years later and she looks to be in phenomenal shape (no offence to the other two Olympians, who may or may not look good for their current age). Given the fact the women’s 100 free world record dropped almost 2.7 seconds from that time period, all things being equal, would put her 8:16 800 free well below the current world record. When training for the last Olympic trials she also posted some amazing times at age 40+, so having a current picture is more than appropriate.

Edmin Moses , one of the best of his generation too . Loved watching him run the 400

Agreed, Looks like some one added a zero. I’m guessing 127,750 is probably closer to the mark.

I calculate that she would have to swim 99 miles a day; 365 days a year for 35 years to achieve the miles listed on the Wheaties box.