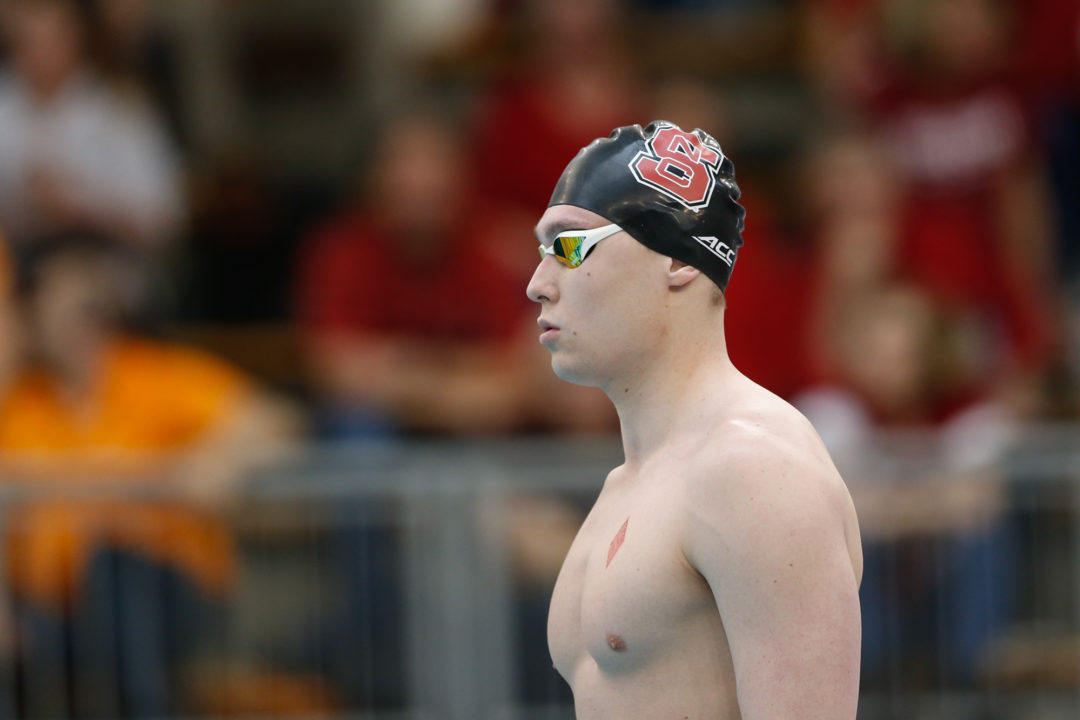 The UNC Last Chance Meet was among the most fruitful on Sunday, with 3 swimmers locking up likely NCAA Championship invites. Archive photo via Tim Binning/TheSwimPictures.com

The most fruitful of Sunday’s last chance meets, among those that have officially uploaded results into the NCAA database, was the one hosted by North Carolina. There, 4 swimmers earned their NCAA qualification times, while another danced his way on to the bubble.

NC State senior Jacob Molacek averted a disastrous non-qualifying scenario via the 100 free. Molacek, who last season scored 14 individual points for the Wolfpack via a 5th-place finish in the 100 free at NCAAs, didn’t yet have a sure-fire qualifying time for this year’s meet after getting sick just before ACCs.

But that changed on Sunday, when he swam a 42.34 in the 100 free, which ties him for 20th nationally, and is ‘safe’ for an NCAA invitation time. His previous season-best was a 42.45 from mid-season, which he improved to 42.39 in prelims and 42.34 in finals on Sunday. Even that small drop improved him from a “bubble” spot coming into the day to a “near-lock” at its end.

Virginia Tech also benefited to the tune of 2 new NCAA qualifiers at the meet. Sophomore Samuel Tornqvist swam a 1:40.77 in the 200 back, which currently ranks him 22nd nationally which should be safe. His previous season-best of 1:41.39 would not have earned an invite, though he does have a 28th-ranked 2020 IM of 1:43.75 that might have called him up anyway.

His freshman teammate Blake Manoff also probably locked-up his spot at NCAAs. He swam a 1:41.97 in the 200 fly, which improved upon his 1:42.36 from ACCs. His previous season-best would have ranked 34th nationally, which means ‘out’ of NCAA’s. His new time ranks him 24th nationally, which probably means ‘in’ for NCAA’s.

Virginia Tech head coach Sergio Lopez posted on Instagram about a number of other Virginia Tech best times and success stories at the meet, which you can read all about below:

The other possible qualifier to come out of Sunday’s meet is East Carolina junior Gus Santos. Last season, Santos hit a qualifying time for NCAAs at the Liberty Last Chance meet before the NCAA invalidated the men’s times there. That was because of an interpretation that 2 women’s teams wasn’t enough to make a men’s meet bona fied: there needed to be another men’s team present, which there was not.

This year, however, there were plenty of teams present, and Santos swam a 45.83. That jumps him to 30th in the country in the event. Most years, that doesn’t make an invite, but if 1 or 2 of the swimmers ahead of him choose other events, then he has a chance at NCAAs.

People have to remember that for every person who does a time that puts them on the right side of the bubble, another swimmer is getting bumped out of the big dance! No articles or tweets about them

Ur right we should just not post any articles about the ncaa out of respect for the people who don’t make it.

Nope just anti time trials and last chance. Do it when you are against real competition and the pressure is on. Fair for all if no one has a last chance. To me it is like someone time trialing the week after Olympic Trials and does a time that would have made the team. I might be in the minority but it is my opinion.

They’re time trialing the last week of qualification, per the rules.. what if a conference gets canceled due to weather, it allows for adaptations.. a little different than your scenario.

Eh. Even if a rule was put in place that said “you can’t qualify for NCAAs after your conference meet”, it still wouldn’t prevent teams from tapering earlier in the year and qualifying their peeps in random low pressure meets. Besides, this would be unfair since conference meets are at different times, and forcing teams to focus on conferences could put them at a disadvantageous position for NCAAs (forcing an early or late taper).

Basically it is fine the way it is. Fastest people get in. Period. Messing with which meets get to count is a rabbit hole.

Disagree. I think we’re currently in the rabbit hole re: TT’s and Last Chance meets. Hell, there’s TT’s within Last Chance meets (that are “prelims/finals” sometimes with only one or two swimmers). It’s just not the same as doing it in a “normal” competition environment. And for NCAA purposes, it’s not a qualifying time but for a qualifying “place” (i.e. invite spot). By the same logic, one should be allowed to TT at the NCAA Championships and be allowed to count that time to slot into a “place” for the event and potentially win/score. Hence the rabbit hole we’re already in.

What’s your alternative, only make conference meets count for ncaa qualifying? That would be stupid in like 20 different ways. I am seriously baffled by this anti last chance meet argument lmao.

That’s a terrible comparison. If you’re at all familiar with Olympic Trials, people are time trailing up to the very last day to qualify for the Olympic Trials. It’s only different in that at Trials you are shooting only for a particular time and there’s no limit of qualified athletes so there’s no “bumping” anyone off.
These guys are following the rules. There’s time trials for a reason. Congratulations to those who qualified!

Never been a fan of the constant parade of “last chance” meets. My thought is get up and do it at conference when youre supposed to! Make the playing field even for everyone instead of this constant chase for cuts

4
-7
Reply
JP input is too short
Reply to  Nazar

Who says you’re “supposed to” qualify for NCAAs only at conference…?

I’m not a fan of last chance meet qualifiers. Do it when the pressure is on at the right time or not at all.

So if Seliskar were to decide to do the 200 fly, he’d be in for a qualifying time from a February dual meet that he won by 3 seconds… is that “when the pressure is on at the right time?”

Jack Saunderson will make the meet in the 200 fly at a conference meet that he won by 5 seconds… is that “when the pressure is on at the right time?”

Tate Jackson’s 50 free time is from their midseason meet… “when the pressure is on at the right time?”

Every team gets a certain amount of meets to swim in over the season. That number is the same no matter what team you are.

There is actually quite a lot of pressure at a last chance meet, considering it’s your last chance. Nobody to race. Few, if any, teammates cheering for you on the sidelines.

It’s not like these are free passes to NCAAs. You have to swim fast to make the meet and you have mid September to early March to do it, at a wide variety of meets. Everybody knows and is playing by the same rules. All conference meets are not created equal either, so that “level playing field” concept is bogus.

The gamesmanship and art of getting people qualified throughout the season and setting them up to score is part of the excitement of the sport.

What about if someone DQs for a false start or the 15m rule? or something else like the back to breast turn at their conference meet in the prelims? Why not let them time trial that night at their conference meet to qualify? You think 1 DQ should be a “final DQ” and end their season right there? I dont think it should…. I am guessing you dont like it for 1 of 2 reasons. 1) you were bumped by a time trial or last chance swimmer, or 2) you are trying to figure out who makes it, and all these last chance meets are hard to keep track of and keep messing up your final tally.

Also, can I just say 1 more thing…. Jacob….. get a freaking flu shot!!!! Every other coach and swimmer out there: GET A FLU SHOT!!! get it as soon as you can in the “flu season”… What harm does it do to get the shot??? If you lose out on NCAA because you got the flu the week before ACCs, or whatever conference, it is your own fault.

I am tired of hearing this as an excuse. Get the shot. It is widely available. No excuse. No, I do not work for any type of pharmaceutical company.

PS, wash your hands too.

Thousands, if not millions, of Americans get the flu each year after receiving a flu shot. There are a ton of different strains of influenza each year, and the shot just takes a good guess at which strains will be popular that year. Depending on how well scientists predict the popular strains, you may or may not be well protected from what’s floating around. Never a bad idea to get the shot, but don’t guarantee squat!

Point being, Malocek getting a flu shot would’ve guaranteed nothing, so I wouldn’t say he… Read more »

I was under the impression that it was more effective this year than usual.

Still more % immunity than not getting the shot…

Ha! @2cents…burn! Lol why would you scold the guy. He got sick. It happens. Congrats to him for getting the job done to qualify.

So now what 2 Cents? No excuse?

As someone who has been pushed out of NCAA qualification due to a last chance swim, yeah it’s no fun and a bit hard to take, but that is part of the game and the sport we signed up for. Everyone knows the rules and that last chance meets happen, so you just gotta hope to go fast enough to be safe.

Change the rules so there are NO “Last Chance Meets”. The SA miss enough class time with dual meets, invites, conference and possibly NCAAs. I would insert if schools, coaches and athletes are so gun on having these “joke” meets let us consider the following: If no athlete makes the NCAA for a school at a “Last Chugging Choking Meet” the coach of record pays a $1000 fine to the NCAA.

Sir this is Wendy’s