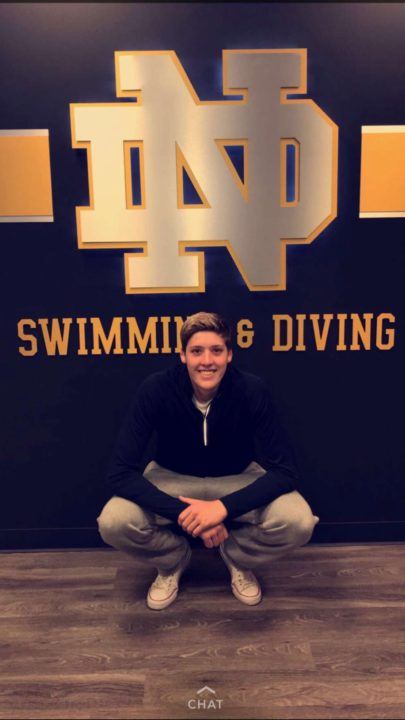 Notre Dame faced off with West Virginia for a two-day dual meet this weekend, with the Fighting Irish posting decisive wins in both the men’s and women’s meets.

Jack Hoagland rewrote his personal record book this weekend, clocking 4 lifetime bests. Hoagland kicked off his meet with a win in the 200 back, posting a 1:44.76. He was neck-and-neck with teammate Will Cumberland at the 150 mark, but opened up a big last 50 of 26.42 to finish a second ahead of Cumberland (1:45.83). The swim was a personal best for Hoagland, coming in well under his previous best of 1:46.77 from 2019.

Hoagland then finished 2nd in the 100 breast with a 54.33, behind teammate Josh Bottelberghe, who won with a 53.78. Hoagland’s time was a personal best by over 3 seconds, coming in well under his previous best of 57.60 from 2018. Hoagland finished off Friday’s events with a 44.43 anchor split on the Notre Dame C 400 medley relay.

Notre Dame sophomore Cason Wilburn was a perfect 4-for-4 on wins on Friday, with 2 relay wins and 2 individual wins. Wilburn provided a 19.98 split on the 2nd leg of Notre Dame’s winning 200 free relay. Topher Stensby led the squad off in 20.28, with Brendan Santana posting a 19.74 on the 3rd leg, and Alec DeLong anchored in 19.85, resulting in a 1:19.85 final time. Wilburn also anchored the 400 medley relay with a 43.53, which was the fastest split in the field.

West Virginia’s Emily Haimes posted a massive win in the 100 free, swimming a 49.97. The swim marked Haimes’ first performance under 50 seconds in her career, and was good to win by .80 seconds. Haimes also anchored the West Virginia 400 medley relay in 49.77.

MORGANTOWN, West Virginia — No. 18/18 Notre Dame maintained the lead and won both dual meets at West Virginia Saturday, with the men topping the Mountaineers 271-82 and the women besting WVU 244-127.

Irish swimmers made their mark, as Madeline LaPorte and Jack Hoagland both set Mylan Park pool records in the 500 Free event. Notre Dame totaled five NCAA B-Cuts on the weekend in the final meet prior to the ACC Championships.

“It was a great session of swimming & diving for our group this morning,” head swim coach Mike Litzinger shared. “Both Madeline LaPorte and Jack Hoagland led the way with Mylan Park Pool records in the 1000 Free, and David Petrison improved his Notre Dame record on the 10-meter.”

On the diving end, Annie Wiese completed her collection of three Zone-A scores in all three events on the meet. On the men’s platform, Dave DeBacker and Petrison led the way.

“It was a good win for Annie on the 3-meter,” head dive coach Mark Bradshaw shared. “[Consistency] is one of Annie’s strong suits; she put together a couple of really nice performances. On tower, [Kelly and Annie] were both very strong, really reminiscent of David Petrison and Dave DeBacker.

“Everybody on tower was competing it for the first time this season,” Bradshaw continued. “I set the bar pretty high for the beginning of the season, and they really brought their game on the tower. On springboard, Austin [Flaute] did very well. Kate [McCahan] had a strong meet, both on springboard and platform.”

In the women’s 200 Medley Relay, Notre Dame’s Carly Quast, Coleen Gillilan, Cailey Grunhard and Rachel Wittmer brought home the win with a 1:39.39. The Irish men followed suit in the 200 Medley Relay as the team of Brendan Santana, Josh Bottelberghe, Cason Wilburn and Topher Stensby touched the wall first with a 1:26.57.

“JP Becker finished his last competition for Notre Dame in style, as his time in the 200 Breast was good enough to place him No. 10 on the all-time Top 10 list,” Litzinger noted. “I can’t think of a better way to end his career. I’m very proud of JP.”

Madeline LaPorte clocked a 9:57.31 in the women’s 1000 Free, a Mylan Park pool record, followed by Allison Kopac in second (10:10.77). Hoagland turned in a pool record in the 1000 Free to match, winning the event with a 8:49.95, followed by Liam Hutchinson in second (9:17.55). Hoagland’s time was a personal best, and improved his time as the second-fastest performer in program history in that event.

In the diving well, Straub noted another win, this one in the women’s 1-meter, scoring 338.10, a Zone-A score. Annie Wiese followed suit with a 306.15, also a Zone-A score. On the 3-meter, the two switched places, as Wiese brought home the win with a Zone A score of 347.55 in the event Kelly Straub followed behind with a 330.00 (Zone B). Overall, Wiese noted Zone-A scores in all three events on the weekend.

On men’s platform, Petrison set a new program record with a 346.80 on tower to win. DeBacker placed third with a 333.53. Petrison, the previous record holder, cleared the next closest program record by more than 40 points (305.90, James Lichtenstein, 2016).

Notre Dame will prepare for the ACC Championships, which take place in Greensboro, North Carolina from Feb. 17-20 for the women and divers, and Feb. 24-27 for the men’s swimmers.

MORGANTOWN, W.Va. – The West Virginia University men’s and women’s swimming and diving teams concluded competition against No. 18/18 Notre Dame on Saturday, Jan. 30, at the Aquatic Center at Mylan Park in Morgantown.

The second day of the two-day dual meet was highlighted by a trio of wins for the Mountaineers in the competition pool. Sophomore Emily Haimes secured a win in the 50 free, senior David Dixon placed first in the 200 fly and senior Ally VanNetta captured her second win of the weekend in the 100 back.

“We had a very strong day, and it was a great way to send off our seniors,” Mountaineer coach Vic Riggs said. “As a team, we competed very well. Once again, we had several lifetime best times, our relays were strong and, as a whole, we improved from our last meet. Now, we’ll get back to work and get ready for Big 12s.”

In the diving well, sophomore Holly Darling and junior Camille Burt paced the women’s divers on the 1- and 3-meter events. Darling finished in third place on 1-meter (296.93) and 3-meter (326.40), while Burt notched third-place finishes on both events with respective scores of 293.48 and 310.95.

“Our divers showed up in every aspect today, with three making their NCAA Zones cuts, ” head diving coach Karla Helder said. “With only two competitions for our dual-meet season, these women focused on the skills to get the work done and had tremendous results.”

Back in the competition pool came WVU’s first win of the day, as Haimes was the first to touch the wall in the 50 free, notching a time of 23.40. Senior Ryen Van Wyk secured a second-place finish in the men’s event with a time of 20.36. A pair of back-to-back Mountaineer victories were next, as Dixon earned the win in the 200 fly (1:46.79) and VanNetta notched her victory in the 100 back (54.43).

In the 1000-yard freestyle, West Virginia finished third in both events, as sophomore Anne-Elaine Tiller finished in 10:36.40 for the women and freshman William Mullen touched the wall in 9:23.26 for the men. The weekend concluded with the 400 freestyle relay. The Mountaineer women’s team of Haimes, sophomore Harna Minezawa, Buechler and sophomore Jacqueline McCutchan combined to finish second in 3:22.88. Van Wyk, senior Max Gustafson, Dixon and freshman Roanoke Shirk placed third with a time of 3:01.48.

A full list of results from the meet against Notre Dame can be found at WVUsports.com.

The Mountaineers now prepare to begin the postseason at the 2021 Big 12 Swimming and Diving Championship, at the Lee and Joe Jamil Texas Swimming Center, in Austin, Texas. The event runs from February 18-27, with the diving competition taking place first, and the swimming competition commencing the following week.

There’s a monstrous 400 IM brewing in there.

Yedeon was like him in season. We will see what will happen at ncaas

Why isn’t it an NCAA event?

Probably “because it never has been” and people like the event balance now enough to not want to change it, I guess.

Would be really hard to fit into a 3 day meet schedule. Could race it on the new “day 0” I guess, but doesn’t do much to help the marketability of NCAAs.

I wonder if we’d see enough of a difference in event winners from the mile to be worth doing it. Now that there’s an 800 at the Olympics, maybe people will feel more comfortable adding it.

I can tell you this much: there’s a low degree of confidence of getting the NCAA to expand the total number of qualifiers. So, you’ll be losing the low-end qualifiers… Read more »

I have swam against jack! What the accomplishment. He is fast