Italy’s Ceccon Knocks Down World Junior C’ships Record With 53.46 100 Back 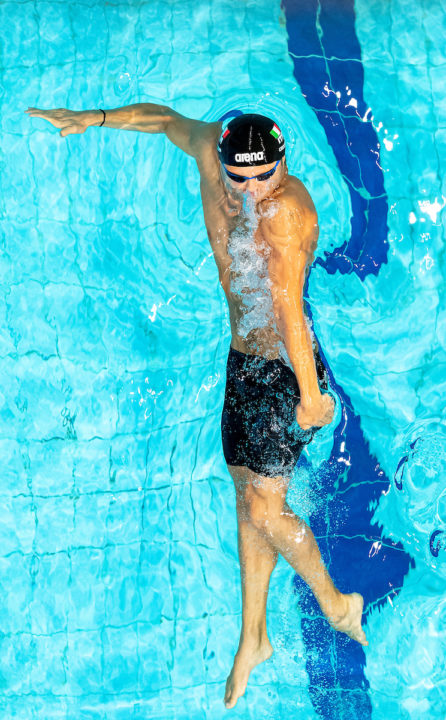 18-year-old Thomas Ceccon is the king of the men's 100m backstroke, winning the World Junior Championships title in a new meet record of 53.46. Archive photo via G.Scala/Deepbluemedia/Insidefoto

The first event on the second night of the 2019 World Junior Swimming Championships gave us some fireworks, as 18-year-old Thomas Ceccon took the men’s 100m backstroke event in a new Championships Record.

The young Italian had already established himself as a major player in the event after having led the prelims in 54.07, a time which also checked in as a new Meet Record at the time. Splits for that scorcher included 26.23/27.84. Ceccon entered the meet as the only sub-54 second swimmer, holding a previous PB of 53.60 that he produced this spring at the Italian Championships.

Tonight, however, Ceccon fired off splits of 26.14/27.32 to establish a new Italian Junior Record and Meet Record, slashing .14 off of his aforementioned effort to take the gold. Behind the Italian tonight were Nikolay Zuev and Wyatt Davis of Russia and the United States, respectively. Zuev notched 53.59 for silver while Davis hit 54.14 for bronze.

At the senior World Championships in Gwangju, Ceccon was just 54.04 in the heats and then 54.20 in the semi’s, so he got back some of his sub-54 mojo that was missing just weeks ago.