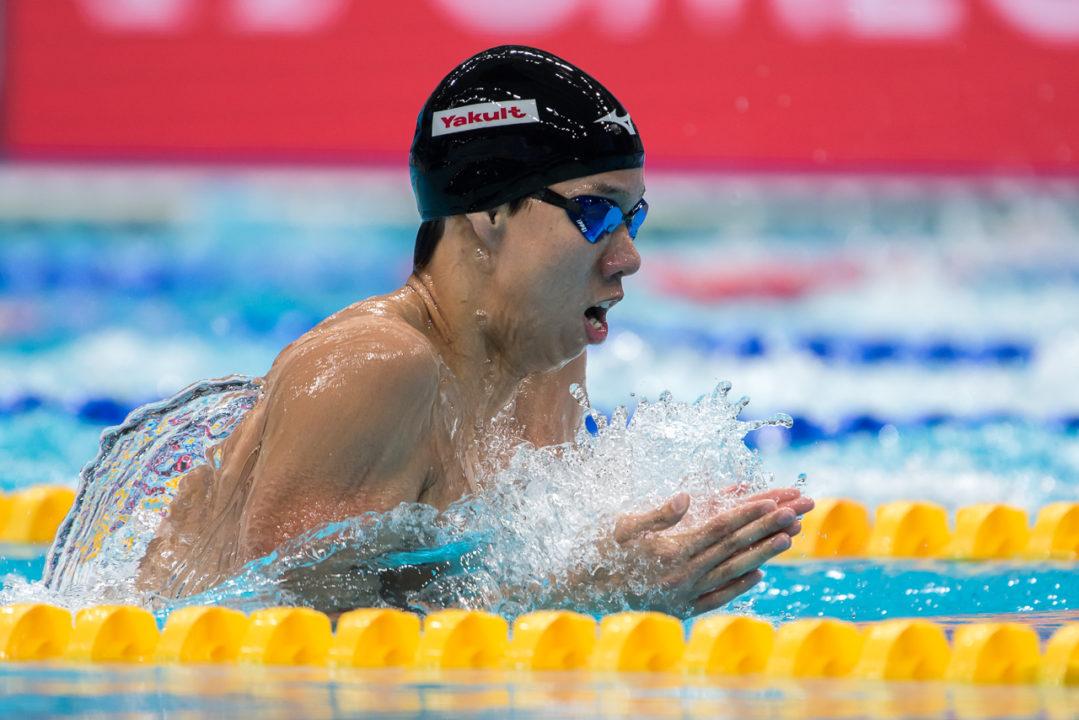 On the back of the Pan Pacific Championships and Asian Games already done and dusted this summer, several Japanese high-profile athletes were back in the pool racing once again, this time locally at the 94th Japan Student Swimming Championships. Ippei Watanabe made his presence known in the men's 100 breaststroke on day 1. Archive photo via Peter Sukenik/www.petersukenik.com

On the back of the Pan Pacific Championships and Asian Games already done and dusted this summer, several Japanese high-profile athletes were back in the pool racing once again, this time locally at the 94th Japan Student Swimming Championships. As with most domestic competitions, the inter-collegiate meet is of high priority for Japanese swimmers eager to defend their universities’ place among the fierce rivalries.

Two meet records went down just on day 1, one from the women and one from the men. Mahiro Ishii rocked the 4th fastest 400m freestyle of her career to win the race in 4:10.52. That took out the old meet mark of 4:10.98 and represented the only time of the field under 4:11.

The men’s meet record came in the form of the Meiji men’s 4 x 100m freestyle relay squad. Collectively earning a time of 3:16.86, the squad easily overtook the previous record of 3:17.32. Leading the way for the new record-setting team were Katsuhiro Matsumoto and Juran Mizohata who notched respective splits of 48.28 and 48.38 to spur on the new record.

Reigning 200m breaststroke world record holder Ippei Watanabe competed in the shorter 100m sprint tonight representing his Waseda University. Clocking a winning mark of 1:00.29, tonight’s gold made it 3 consecutive Student Swimming Championship titles for the 21-year-old. The top 5 finishers in the race were all along the 1:00 line.

The women’s 100m breaststroke saw Kanako Watanabe put up a strong effort of 1:07.47 for the victory. Splitting 31.74/35.73, Watanabe represented the only swimmer to dip under the 1:08 threshold. Watanabe earned the 200m breaststroke gold in Jakarta with a winning time of 2:23.05, so look for the 21-year-old to possibly sweep the breast events here in Yokohama on behalf of Waseda University.

The women’s 200m fly saw Yumi Nakano earn gold in 2:08.32, a time that would have won silver at this year’s Asian Games. The bronze and silver medalists from that Jakarta race were also in the mix here, as Suzuka Hasegawa touched in 2:08.51 for 2nd place at these championships, while Sachi Mochida rounded out the top 3 in 2:09.90.