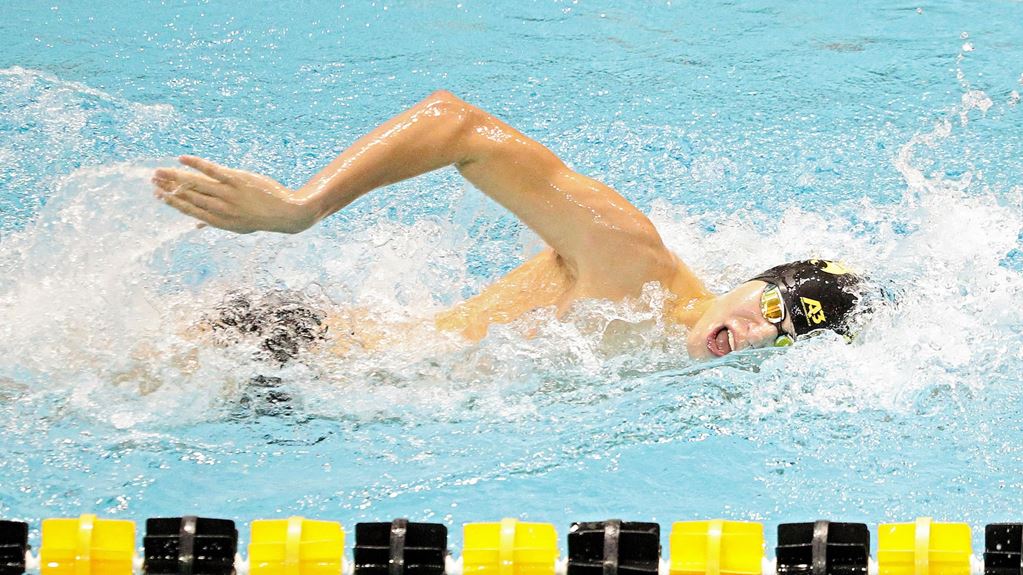 Iowa is set for Big Ten duals Friday and Saturday. The women are set to host Michigan, while the men face Indiana and Michigan in Bloomington, Indiana. Current photo via Stephen Mally, Iowa Athletics

The University of Iowa swimming and diving team is set for Big Ten Conference duals on Friday and Saturday.  The Hawkeye women host Michigan on Friday at 2 p.m. (CT) at the Campus Recreation and Wellness Center. The Iowa men travel to Bloomington, Indiana, to for a double dual Saturday, facing Indiana and Michigan at the Counsilman-Billingsly Aquatcis Center at 8 a.m.

• Live results will be on Meet Mobile and hawkeyesports.com.

• Friday’s dual against Michigan will be streamed live on BTN+.  It is a paid subscription service.

The Iowa men’s team posted a Big Ten win over Minnesota, 156-444, to improve to 2-0 in both conference competition and overall. The women nearly upset the Gophers, but fell, 157-143.

HEARING FROM SENIOR FREESTYLER WILL SCOTT

“We’re excited as a team to face Michigan and Indiana. This meet is a good chance for us to show what kind of competition exists in the Big Ten Conference and truly how difficult it is. We’ve shown we have the depth and shown what kind of character exists in this team. I’m confident our men’s team can face top-five competition on the road and come out better for it on the other side. We’re getting a chance to show what we have stored from our upperclassmen and lower classmen.”

The Hawkeyes’ freshmen class has proved to be impact performers for the team early in the 2019-20 season.

• Mohammed Neuman is leading the team off the 1-meter with a score of 334.00 — a score that ranks 10th all-time in program history.  Neuman has NCAA Zone standards off both the 1-meter and 3-meter.

• At the season’s first invitational, nine Hawkeyes took to the water at the SMU Classic and finished fourth out of six total teams with 242 points.

The Hawkeyes have earned six Big Ten Conference weekly honors during the 2019-20 season.

WHAT YOU NEED TO KNOW

• Marc Long is entering his 16th season as the Hawkeyes’ head coach.  Long  has coached 44 All-Americans during his tenure as Iowa’s head coach.

• Long was inducted into the National Varsity Club Athletics Hall of Fame in 2019.

• Iowa also returns Will Scott and Joe Myhre, who both earned honorable mention All-America honors as sophomores in 2018.

• Hannah Burvill –  Burvill is a two-time NCAA qualifier, including qualifying in the 50 free, 100 free, and 200 free last season.  The England native’s highest finish came in the 200 free, where she finished 28th.  Burvill has been named Iowa’s team MVP the past two seasons.

• Sam Tamborski – Tamborski qualified for the NCAA Championships off the 3-meter as a true freshman, where she placed 19th.  The Colorado native also placed 10th at the Big Ten Championships in 2019.

• Anton Hoherz – Iowa’s 2019 team diving MVP qualified for his first NCAA Championships off the platform as a sophomore. He placed 40th overall.

BURVILL BACK FOR FINAL YEAR

Iowa has 23 newcomers on the roster — 17 on the women’s team and six on the men’s team.  The Hawkeye women have as many newcomers as returning letterwinners on the squad.

• Freshman Will Myhre joins the men’s team as a 19-time high school All-American.  He is the younger brother of senior Joe Myhre.

After hosting the Big Ten Men’s Swimming & Diving Championships in 2019, the women are coming to Iowa City in 2020.  The Hawkeyes will host the 2020 Big Ten Championships at the Campus Recreation and Wellness Center from Feb. 19-22.  It is the first time the women’s championship has been in Iowa City since 2012.

The Iowa coaching staff has two new faces in 2019-20.  Brian Schrader and Emma Sougstad join the program as first-year assistant coaches. Schrader joins the program following a 13-year stint as head caoch for the University of Denver, where he was a 14-time Conference Coach of the Year.  Sougstad, a Hawkeye All-American, joins the program after a two-year stint at the CSCAA.

The Hawkeye women host Rutgers on Nov. 8 for the team’s final dual before the midseason Minnesota Invitational on Dec. 4. Iowa’s matchup against the Scarlet Knights takes place at the Campus Recreation and Wellness Center at 2 p.m. (CT). Admission is free.