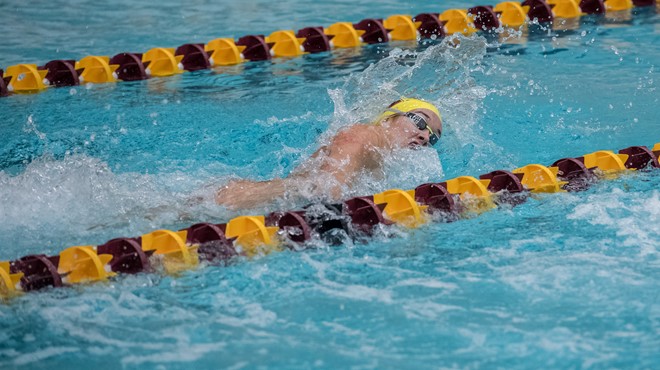 The Iowa State women defeating St. Catherine 197-97 and Omaha 206-88, beating out its competitors in 11 of 16 events on Friday. Current photo via Iowa State Athletics

AMES, Iowa – The Iowa State swimming and diving team (2-1) picked up their first win by defeating St. Catherine (0-2) 197-97 Omaha (1-1) 206-88. The first four events went to the Cyclones, as they went on to beat out competitors in 11 of 16 events. The 118-point win goes down as the second largest margin of victory in school history against Omaha.

Iowa State started out the night by taking the top two spots in the 200 medley relay. The team of Emily Haan, Martha Haas, Wyli Erlechman and Anna Andersen touched first with a time of 1:45.22. Elizabeth Richardson, Lehr Thorson, Lucia Rizzo and Emma Sass clocked in not far behind at 1:48.49.

Freshman continue to impress as they captured first-place finishes. In back-to-back events, Nolwenn Nunes took the win in the 200 free (1:56.31) and Elizabeth Richardson in the 100 back (59.30). Fellow freshman Jayna Misra went on to take first in three-meter diving.

Schlossmacher Smith remained dominant in one-meter diving as she secured her second Zone diving qualifying score in as many meets.

“Michelle not only got the Zone cut score, but that was her personal best,” said diving coach Jeff Warrick. “I thought she dove really consistent and did a quality job for us. I’m really happy she’s here.”

The 400 freestyle relay rounded out the double dual as Iowa State remained unbeaten in relay events. The top team of Sophia Goushchina, Haas, Kennedy Tranel and Trinity Gilbert raced to victory with the time of 3:34.35.

“One of the things we wanted to do is learn from our mistakes at Nebraska,” said head coach Duane Sorenson. “I think almost everyone really worked on those little things about not just good finishes, but attacking our turns, having good technique and not trying to spin through their races.”

AMES, Iowa – The Omaha swimming and diving team recorded a split with Iowa State and St. Catherine in a triangular on Friday night in Ames, Iowa.

Omaha picked up its first victory of the season against St. Catherine with 166-131 victory while falling to Iowa State, 206-88.

The Mavericks recorded a pair of event winners with Abigail Mitchell finishing the 200-yard breaststroke in 2:06.77 and Bethany Gatlin clocking a 59.18 in the 100-yard butterfly.

“It was a great day to be a Maverick,” said head coach Todd Samland. “We had two event winners with Abigail Mitchell and Bethany Gatlin winning their events and had some other swims that were very competitive.”

Rachel Morrow, Abigail Mitchell, Anna Capoun and Gatlin teamed up to record a second-place finish in the 400-yard freestlye

Omaha rounded out the 10 finishes in the top three with a quartet of third-place finishes. Maddie Mather completed the 1,000-yard freestyle with a finish of 10:52.13 and MacKenzie Stewart clocked a 1:01.31 in the 100-yard butterfly. Lizzy Giese posted a time of 2:14.50 in the 200-yard individual medley while Natalie Wright garnered 170.35 points in the one-meter dive.

“It was a very good showing for outs first of a three-weekend stretch,” added Samland. “This is an important part of the competitive season as we prepare for the Kansas Classic at the end of November.”

The Mavericks continue action next weekend as Omaha hosts Western Illinois in conference action on Friday, Nov. 1 at 5:30 p.m. at H&K Pool.

AMES, Iowa – The St. Catherine University swim and dive team took the big stage on Friday evening competing against Division I teams, Iowa State University and University of Nebraska-Omaha for the first-time in program history.

Wentzel’s top-time of 1:03.17 was a season-best in the 100-yard breaststroke in her first individual race of the triangular. She followed up with another first-place finish in the 200-yard breaststroke with a time of 2:20.69 and her final top-finish in the 200-yard individual medley at 2:06.56. Klein’s second-place finishes resulted in the 50-yard freestyle with a time of 24.72 and the 100-yard freestyle coming in at 54.14.

Baxley was also part of the Wildcats’ 200-yard medley relay team that finished third and included both Wentzel and Klein. The sophomore Division I transfer was the leadoff for St. Catherine followed by Wentzel, first-year Gillian Durand, and Klein rounding out the balance of the relay.

Junior Molly McMahon had a successful meet swimming a lifetime-best time in the 200-yard butterfly coming in at 2:24.66 and finishing the 500-yard freestyle race in 5:32.17.

This week’s MIAC Athlete of the Week, Sydney Grohman had a season-best time in the 100-yard freestyle with a time of 55.09 and in fifth overall. Grohman was the anchor on the Wildcats 400-yard freestyle relay producing her first-ever non-championship 100-yard free split under 54.0. Grohman’s split of 53.62 helped St. Catherine clinch the third-place title with a time of 3:38.55 with the relay team including Klein, sophomore All-American Maggie Menso, and Baxley.

The Wildcats are back in the pool on Saturday competing at Luther College against the Norse and the Blugolds from the University of Wisconsin-Eau Claire at 1 pm.