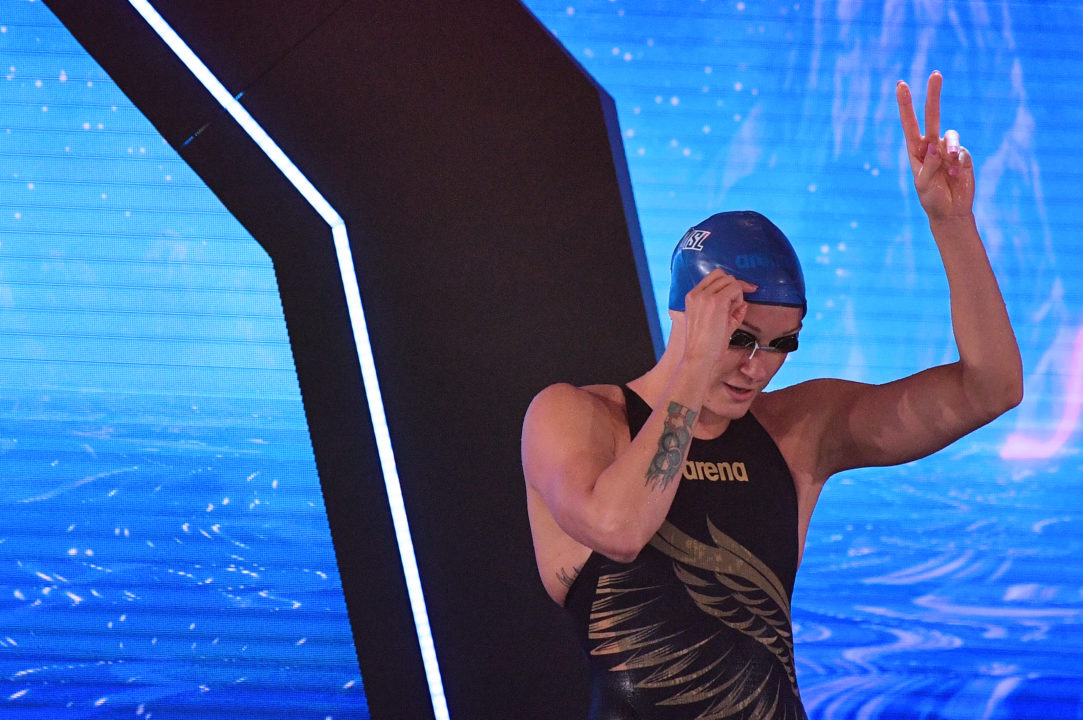 In any individual meet, Cali Condors swimmer Caeleb Dressel has proven himself to be the most valuable swimmer this season. In his first meet in Naples, Italy he won the MVP honors by 10 points ahead of Energy Standard’s Sarah Sjostrom 57.5 points – 52 points. In his second meet, the U.S. Derby in College Park, Maryland, he cruised to the MVP honor by a 10-point margin ahead of LA Current swimmer Beryl Gastaldello, 61.5-51.5.

But, he missed his team’s first meet in Indianapolis, Indiana, which could turn into a very expensive absence.

That’s because Dressel would be a huge favorite for the season-long MVP award, if he had raced in all 3 meets. Instead, Sjostrom is a big favorite heading into Las Vegas this weekend, holding a 19.5-point lead over her teammate Chad le Clos as the highest scorer this season in MVP points.

While Sjostrom’s lead in MVP scoring is significant, it is not insurmountable, primarily for one reason: points at the Las Vegas championship meet will count double toward the season-long MVP award. In essence, that means the deficits that everyone has to Sjostrom in this ranking can be viewed as ‘halved’ for the finale.

Scoring becomes a whole different battle in the finale, where only the top 4 teams, which are by far the deepest 4 teams, compete. In Las Vegas, a few tenths could result in a slide from 1st or 2nd to 5th or 6th in certain races.

For Dressel, for example, who dominated the US Derby meet, he’ll now have to face Florent Manaudou and Ben Proud in the 50 free, and Chad le Clos in the 100 fly, and the Energy Standard and London Roar relays, in addition to the LA Current relays that he had to face in Maryland.

Dressel will be the biggest inhibition to Sjostrom running away with this award. Not because he has a chance to make up the gap (which seems unlikely), but because he has at least 3 probable head-to-head matchups with Chad le Clos, who currently ranks 2nd in season-long MVP scoring. Le Clos would need a nearly-perfect meet to catch his teammate Sjostrom for season MVP, which would include a win in the 100 fly (he beat Dressel in that race in Naples), the 100 free (he was 2nd, almost a second behind Dressel, in Naples), and the 50 fly (he was 2nd behind Dressel in Naples). That’s in addition to any possible relay matchups.

In short: Sjostrom is the favorite to win the season MVP award, but is not a lock.

Reminder of how MVP Scoring Works:

I think Sjostrom is going to be facing some pretty stiff competition which might knock her a few points off. I don’t think Dressel’s results change. It’s definitely possible he gets the season mvp. Probably not likely, but definitely possible

Dressel’s two results (57.5 and 61.5) clear Sjostrom’s worst by 13.5 and 17.5 respectively – so if Dressel matches his best and Sjostrom matches her worst (which isn’t exactly bad), then Dressel would win season MVP even on one fewer meet. Sjostrom’s best was 55.5 though, and it seems unlikely Dressel is going to score 72 (it would take winning skins, 5 individual events, AND 3 relays).

I think Dressel will do better than Sarah against the competition for individual events, but worse for relays as the Condor men’s relays aren’t that strong especially with the competition in Vegas.

Really depends on the tapers, and who’s all-in for this. I suspect Sarah, Leclos, and Chalmers are all-in. Dressel, with big picture in mind and the Troy mindset, is likely to be short of all-in (kind of like his conference rests). That said, Dressel really thrives in these college meet atmospheres, and with the appropriate gallon of pre-workout (but not meldonium!), will probably be very fast. So basically, I just added nothing.