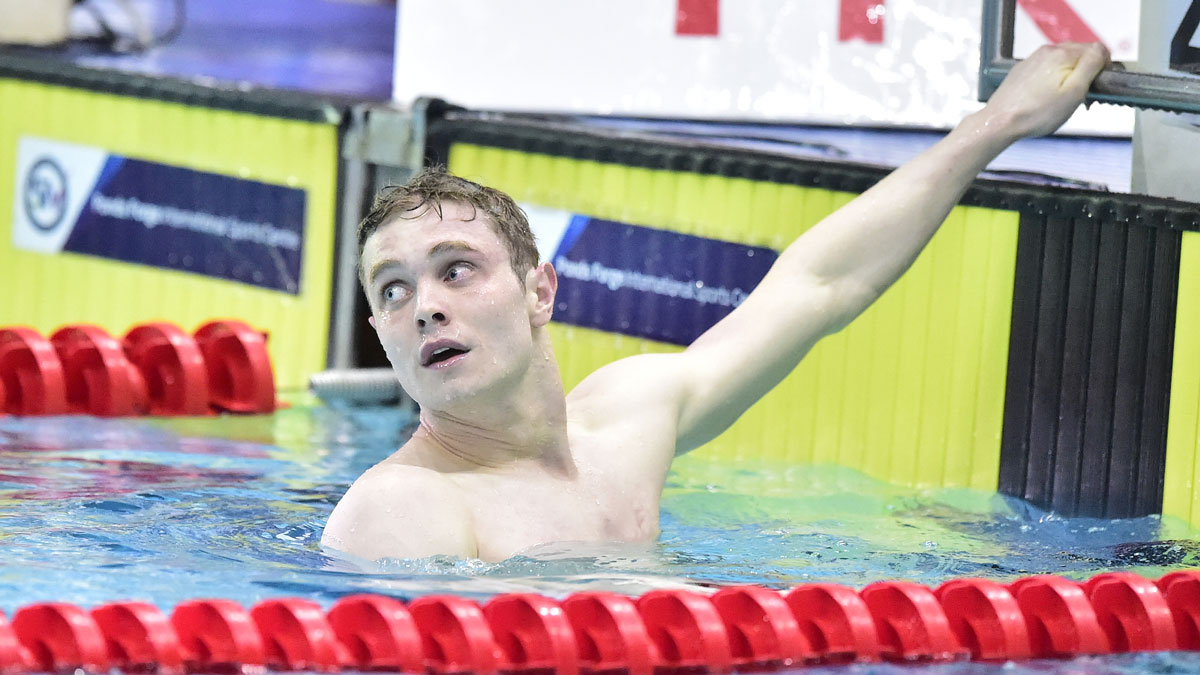 Distance freestyler and sometimes backstroker Jay Lelliott is out of the International Swimming League playoffs with a shoulder injury. Archive photo via SW Pix/Swim England

British swimmer Jay Lelliott says that a shoulder injury will keep him out of the International Swimming League playoffs. Lelliott competed in two regular season meets for the Toronto Titans this year.

“Gutted to say I’m unable to be part of the playoffs due to a poorly timed shoulder injury,” Lelliott posted on his Instagram story. “However, I can’t wait to cheer on the (Toronto Titans) from home!”

Lelliott is one of at least three injuries for the Titans since they announced their playoff roster. The Titans at first gasp looked like one of the most complete teams heading into the playoff round, but now have a roster that feels thin in areas.

Cole Pratt, another backstroker, also has an injured shoulder. Pratt, unlike Lelliott, did make the trip to Eindhoven and is available to the team, though that’s currently on a “day by day basis” according to team management. He left an empty lane for a race on Saturday, day 1 of the team’s first Playoff Match, which cost his team a 4 point penalty.

Lelliott averaged 5.5 MVP points per match in a pair of regular season appearances. He scored 11 in his first match, and then swam just one relay in the team’s regular season finale, which had its points Jackpotted.

Along with Pieroni (19.25 points/match) and Pratt, for now (11.83 points/match), those three absences are worth almost 37 points to the Titans. With the men’s roster now down to 13, one fewer than the allowed 14 swimmers-per-match, that also puts additional strain on the rest of the roster, and doesn’t leave the team much flexibility.

The good news for Toronto is that by coming out of the regular season as the #4 seed, they have a dramatically more-favorable schedule than the LA Current, their primary competitors for the last spot in December’s finale. Because of that seed, Toronto is paired at each meet with the severely-shorthanded Aqua Centurions team, whereas the Current have to race against #3 London Roar each week.

The return of Pratt, at least, would be significant in their quest for a first-ever finals appearance in their second season as a franchise.

But Toronto currently is 14.5 points behind Current, and 49 behind London Roar, headed into day #2 of their first match. Moving up into 2nd place would be big for the Titans, and it’s possible thanks to a strong second-day lineup especially for Summer McIntosh and their women’s team.

This is Lelliott’s second season in the ISL for the Titans. His biggest international representation for his home nation Great Britain came at the 2018 European Aquatics Championships, where he finished 13th in the 400 free and 17th in the 800 free in long course, and the 2014 European Aquatics Championships, where he won a bronze medal in the 400 free.

He was the 2015 World University Games champion in the 400 free, and has a pair of Universiade silvers as well.

He is primarily a distance freestyler, who can also contribute in the backstroke races (as he has this season for Toronto), and has a few British national titles.