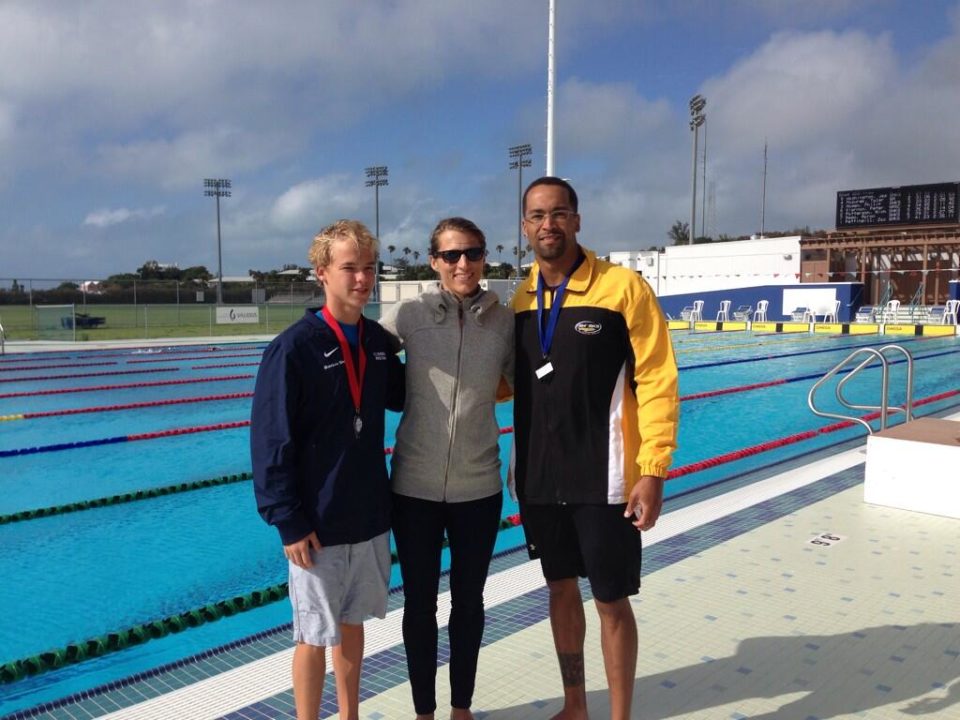 On the final day of the 2014 Bermuda National Championships on Sunday, Pryanka Priyadrshni won the women’s 50 breaststroke in 30.88, which for the 17-year old pushes her to a height not often seen in Indian swimming.

That time not only breaks her own Indian Record by three-and-a-half seconds, it moves Priyadrshni to 5th in the 2014 World Rankings, ahead of names like Jessica Hardy, Moniek Nijhuis, and Rikke Moeller-Pedersen.

A swim that stands out so far has been unsurprisingly broiled in controversy, as several people on deck told SwimSwam that it was their belief that another Indian swimmer, by the name of Agnishwar Jayaprakash, swam the race instead of Priyadrshni. Jayaprakash is a man.

Despite those claims and concerns, there was provided no evidence of any wrongdoing and simply hearsay and disbelief, so the Bermuda Amateur Swimming Federation told the local Royal Gazette newspaper that the time would stand.

After the race, Priyadrshni stood by her swim in comments to the Gazette, saying that if she hadn’t swum the race, a swimmer in a lane next to her, who was familiar with Priyardshni, would have supported the claim. Jayaprakash, who has been accused of taking her spot in the race, didn’t swim in the men’s race immediately thereafter despite being entered.

While there were photographers at the meet that would normally have conclusive evidence in a matter such as this after such a fast time, local observers tell us that those photographers were only present during the finals sessions.

That swim was done by Priyadrshni in prelims. After the races, she says that she rushed to the bathroom feeling ill, only to slip on the wet floor and sprain her ankle. That sprained ankle kept her from racing again in finals.

SwimSwam was promised an email on the matter by Sunday evening, but as of Monday morning had not received a response from the Bermuda Amateur Swimming Association for comment. They reiterated to the Royal Gazette, however, that because of the lack of evidence substantiating any claims or even an official protest, the time would be submitted as official.

This means that Priyadrshni has qualified for the 2014 Commonwealth Games and the 2015 World Championships, as the Bermuda Championships are an official FINA Worlds qualifying event. We have asked FINA for comment on if they will investigate the time further, and as of publishing have not received a response.

Beyond Priyadrshni (or Jayaprakash), there were a few other standout performers at this weekend’s meet.

2008 and 2012 Olympian Roy-Allan Burch broke a National Record in the 50 fly, swimming a 25.08. Burch said on Monday morning that he’s only been working on his fly for a few months, so while he hoped to go under 25 seconds, he was happy with the time.

He and Julia Fletcher will represent Bermuda at the Commonwealth Games this summer. Not making the qualifying standards were Lisa Blackburn and Rebecca Heyliger, both of whom were on the verge of qualification.

Also impressive at the meet was Tyler Mazurek, a 16-year old based out of Swim Atlanta in the United States. He was a 4:57.09 in the men’s 400 IM to break a National Age Group Record by 8 seconds. That placed him 2nd behind the aforementioned Jayaprakash, who won in 4:56.49.

It does sound fishy; what was her time for the 100 breast? And what was Jayaprakash’s (the man) excuse for not swimming in the men’s prelims? Hopefully Priyadrshini will go 30+ at Commonwealth Games and not 34. And it seems that Braden, despite maintaining journalistic neutrality for most of the story, may share my skepticism: “That swim was done by Jayaprakash in prelims.” Freudian slip??

Sorry, that was a Freudian slip! Should be corrected now.

I tried to find her 100 breast time as well, but couldn’t, either through official results or in local news reports. NDetails of the meet as a whole have been tough.

Braden, please see on the BASA website the psych sheet (http://basa.bm/wp-content/uploads/2014/05/validus-bermuda-national-lc-swimming-championships-2014-psych-sheet.mdb1.pdf). She scratched from the 100m breast the day before. He did not swim the 50m after the girls and has not been seen since… Her seed time was 32.90 (not sure how she got that as you say she broke her record by 3.5 secs…). She even went faster in the Breast than in the Fly… Very fishy!

Wait a minute, where did you see that she went faster in breast than fly, Swimfan? If that’s true, doesn’t that clinch a 30.88 for her being bogus? My best stroke is breast and my worst is fly, it’s always been that way, and even so, my 50 fly was always at least 3-4 seconds faster than my 50 breast. It would be totally unprecedented for someone at that level to be faster in breast than fly.

liquidassets – yes, it would be unusual for someone to be faster in breaststroke than butterfly, however not completely unheard of. Breeja Larson’s best in the 50 breast is two seconds faster than her best in the 50 fly, though that 50 fly best was done in-season in 2011, and the 50 breast was done at Worlds in 2013. In a case where a swimmer was maybe just getting a warmup and wasn’t going all out in the 50 fly, it’s possible as well. And that’s what this whole case seems to be centered around. A whole lot of things that are possible, but improbable, to have happened, and at the end of the day, all of the improbabilities seem… Read more »

Why oh why can nothing in the Caribbean go off without some commess? Steupes!! I am so fed up we need to get our collective act together in this part of the world. So nobody checked to see that the correct swimmer was entered in the race? Nobody there knows what the two different swimmers look like? Or is just a case of bad mind and jealousy?
end rant!

Congrats to Roy Burch on breaking a National record. Swimmac must be proud of him

Wow, what a weird story. Here’s hoping she’s the real deal. I guess time will tell.