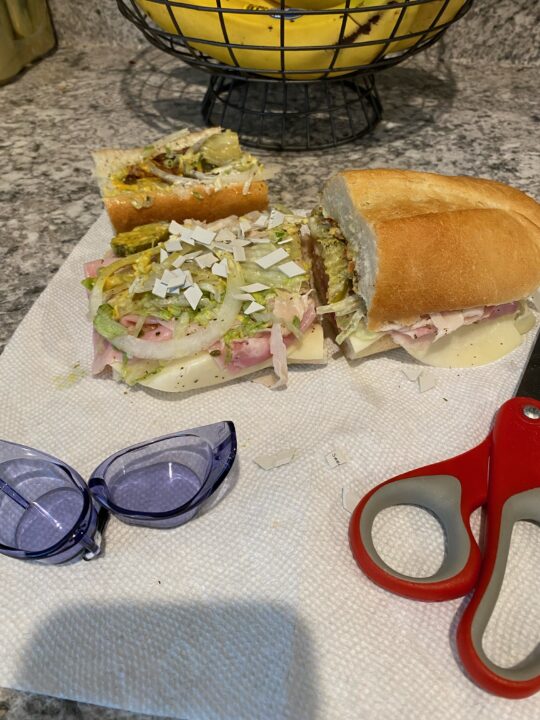 SwimSwam reader Willswim made a not-so-bold call in the comments about the NCAA Championships. He whiffed, but put his goggles where his mouth is. Current photo via Willswim

America’s favorite pastime: making bold claims about sports on the internet, and then declining to follow up on those assurances if or when they don’t come true.

But here at SwimSwam, we have a special respect for people who are willing to be held to account for their flaming hot (or ice cold) takes.

One such take was levied by “Willswim,” as part of a debate related to the impending battle between college stars Maggie MacNeil and Kate Douglass, and whether Douglass would leave the meet with any wins at all.

After “ALEXANDER POP-OFF” proposed (but did not declare) the possibility of the Virginia sophomore Douglass leaving the meet “without any wins,” “Willswim” thought he would lob a pedantic response about individual wins, assured of what seemed like a softball proposal that Douglass would almost surely win a relay, given that the Cavaliers were entering the meet with the top seed in all 5 of them and were NCAA Record breakers in the 200 medley at the ACC Championships.

In fact, Virginia did win a relay, though it was the 800 free relay that they won. Douglass wasn’t on that relay.

And in fact, Douglass did come away with an individual event win, in the 50 free, though MacNeil did come out on top in both the 100 fly and 100 free.

And of course they both missed the most obvious “win” that Douglass came away with from the meet: the NCAA team championship, the first in Virginia’s history.

But where Willswim veered way off course was accompanying his confidence about the outcome with a penance. It was a penance he thought he might never have to ante up, but it was a penance to eat his goggles. Not the more palatable “I’ll eat my shorts” (would edible underwear count?) or even “I’ll eat my hat” (I think I could choke down a bite or two of one of those straw hats, if roasted over an open fire).

Nobody ever guarantees that they’ll “eat their ice cream” or at least “eat their lima beans” if they’re wrong.

But Willswim went with goggles. Pure plastic and indigestible silicon.

But Willswim, in spite of not perhaps being a brilliant prognostiactor of swimming (he placed just 194th in the women’s NCAA Pick ‘Em Contest), is a man of his word.

While he couldn’t stomach, literally, the thought of actually trying to eat an entire pair of goggles, he made an effort worth lauding.

Sacrificing a pair of Swedes to the SwimGods, WillSwim put a bite of strap into his sandwich, and chowed down. While perhaps not a complete ingestion of a pair of goggles, the effort has absolved him of his transgressions, freeing him without heavy conscience to declare a future certainty.

For future reference, we do accept donations to your favorite swim charity instead of actually eating an article of clothing. Here’s a list of suggested charities. Don’t eat your goggles.

Below, read Willswim’s letter of apology, and some pictures of the deed.

Hi! I’m the guy who stupidly boasted that he’d “eat his goggles” if Kate Douglass wasn’t on a winning relay at NCAAs this year. As you know, she wasn’t. I don’t know if I was overexcited about a tremendously talented young swimmer on the best team, if I was trying to amuse or gain favor with the SwimSwam commentariat (that’s a thing), if I just have too much chlorine in my brain, or if it’s a combination of all those things, but it doesn’t matter. I said what I said and now here we are.

I believe there is no greater coward than a liar. I was an average-to-below-average D3 swimmer in the late 90’s, so obviously, my opinions in the SwimSwam comment section hold A LOT of weight with the swimming community worldwide. I can’t have the honorable name Willswim besmirched! That’s why I think it’s important that I hold up my end of this nonsense accord I made with no one in particular. How hard could it be? Rumor has it that Joseph Schooling regularly eats four or five pairs of goggles a day IN PRACTICE!

I chose a pair of Swedes. Ultimately, I couldn’t figure out a way to eat the hard plastic lenses without potentially lacerating my bowels so I abandoned that idea and decided to only eat the rubber strap. I don’t know what rules karma and the SwimGods (Dean!!!) will use to judge me, but my hope is that even though I wasn’t eating the entirety of my googles, they would look kindly on my attempt.

My plan was to cut the strap into little pieces and put them on a sandwich. I was hoping the sandwich would be both substantial enough and flavorful enough to mask the rubber. It wasn’t. I took one bite and unchewable rubber was the most obvious thing in my mouth! Quickly I realized the rubber pieces I’d cut were way too big and this was going to be a more difficult and unpleasant experience than I’d anticipated.

I was able to swallow two pieces of rubber goggle strap before I gave up and removed the remaining athletic wear from the remainder of my meal. I could not do what I had promised and begrudgingly accepted that my comeuppance would be the second difficult thing I had to swallow that day.

I did consume a small portion of my goggles, but probably not enough to think I’d still be welcome on a pool deck ever again. Sadly, in the end I failed and didn’t eat all of my goggles. My deepest apologies go out to SwimSwam, the SwimSwam commenters, Kate Douglass, Todd DeSorbo, Mel Stewart, my parents, sandwich eaters, Sweden, and all other legends of the swim.

Yours with my best streamline,
Willswim

All in favor of making Mr. Willswim the King of the SwimSwam Commentariat (blessed be one website under Dean), say aye.

Jokes aside: I respect him for following through with his word. Props to him. Also this site is awesome. Absolutely fantastic community

Thank you, I’m blushing, but I think we should hold the King title for Lilly just incase she should chose to start commenting.

Lol. The strap came out the other end as Swedish meatballs.

I’m sorry SwimSwam, but this may top whatever April fools joke you have in store for us tomorrow. Absolutely brilliant