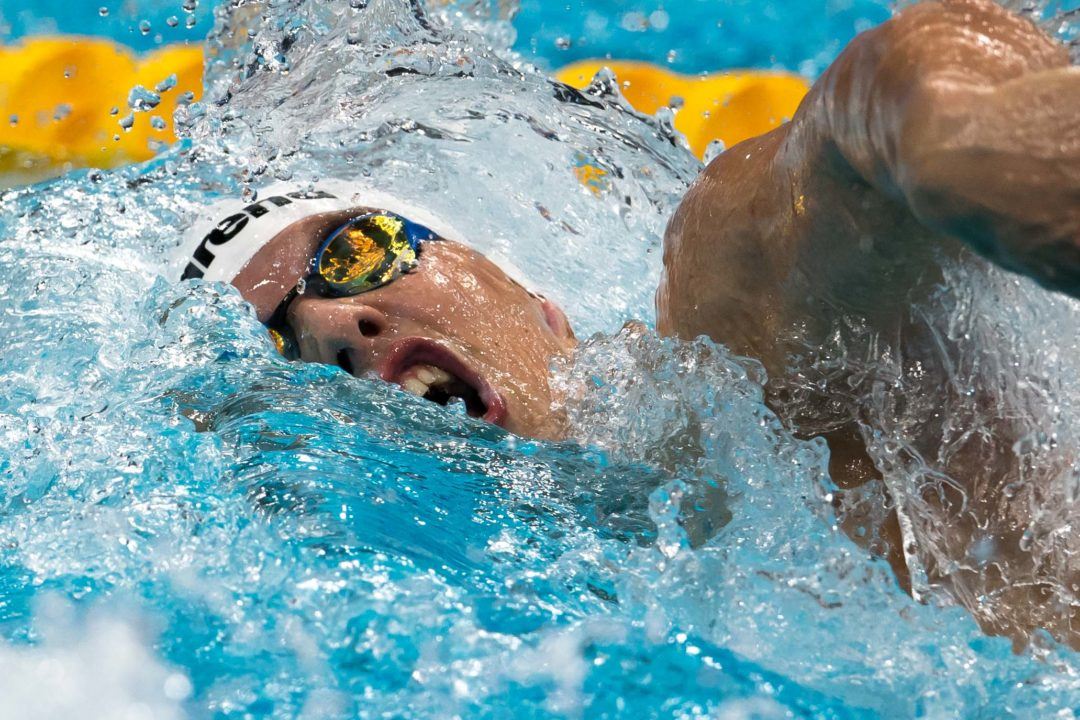 News that additional Hungarian swimmers have tested positive for COVID-19 is rolling in after world champion Boglarka Kapas announced her positive test. The Hungarian Swimming Federation released a statement saying that nine people, including National Team swimmers and staff members, had tested positive as of Tuesday night.

All individuals were tested as part of Hungarian Swimming’s training camps – swimmers and staff members have to test negative twice before entering any of the five national facilities that have reportedly been made available. As part of that protocol, Dominik Kozma, David Horvath and Richard Bohus have also confirmed on Instagram they tested positive; Horvath and Bohus have both said they do not yet have symptoms.

Hungarian star Katinka Hosszu, who was not in Thailand but is now in Budapest, has not yet been accounted for by name. World champion and World Record breaker Kristóf Milák‘s coach told Hungarian outlet Index that he tested negative twice.

The MSA agreed with the swimming pool operators – primarily the leaders of the National Sports Centers – and the state’s sports management that only those who went through two coronavirus tests and who tested negative for the three-day difference can train in foreign training camps, and spent 14 days in quarantine after returning home. For trainers previously in Hungary, this was a negative test. (The MSA used a private provider for sampling, while the tests were processed in state-accredited laboratories – the full cost of the procedure was covered by the association’s own resources.)

All members of the national team as well as professionals (coaches, trainers) participated in the testing. The alliance continues to deliver results that have shown positive results for nine people as of Tuesday night.

All of them went to training camps abroad, after which they went to quarantine for 14 days, that is, since their return they have not been training.

The Hungarian Swim Federation cooperates fully with health organizations and allows only those swimmers to begin pool training who can be excluded from infection – that is to say, in addition to one or two negative tests, they have never been in contact with their infected counterparts before the start of quarantine, even after it has expired.

According to the information received from the infected, none of them currently require special medical attention, but they have already been contacted by the state epidemic authorities. Should any of them require treatment, they will also be subject to the rules of the current national health protocol.”

As of Tuesday, Hungary has 492 confirmed cases of COVID-19 and 16 confirmed deaths.

Hosszu and Laszlo Cseh is negative.

Yup, and if you have that thumbnail then isolate you to a pool and all you can do is training, sleep, and eat.

Keep in mind that millions have likely contracted the virus, gotten over it, and not felt a thing. Swimmers especially will not have respiratory issues for the most part and would be most likely to be completely asymptomatic

That’s why it’s so dangerous. Young people will have no idea they even have it and spread it around.

Which on the plus side, the mortality rate is likely significantly below the reported rate as of now.

But still, the at risk population is massive.

Agree, hard to tell how many have actually had it and gotten over it at this point. At least the testing products seem to be ramping up so I would expect the number of infected to climb significantly but the mortality rate as a percentage to drop.

I’m not sure swimmers will fair better considering the damage chlorine exposure has done to our lungs. I spent many years coughing to the point of gagging at meets due to the poor air quality. That couldn’t have been good for my lungs.

Has there ever been research indicating longterm/permanent damage caused by indoor pool air quality? I’ve not seen that.

Maybe the chlorine kills the virus too 😉

I am an ER nurse and I have seen athletic young people put in ventilators! And once ERs become oversaturated, mortality rate will climb in all age groups! Stop saying to young people that they will fell nothing!

Anecdotal evidence. If viewed on global scale, mortality rate in athletic young people will be extremely low. Look at the mounds of data we already have.

It’s like any other disease, there will be outliers in all age groups.

Not so anecdotal. 19% of Olympic swimmers from the 2008 games had asthma. Seeing as this is a respiratory illness, having asthma will be a problem regardless if you’re an athlete.

Asthma could make your course of illness worse I completely agree. And yet when the data is looked at, the majority of those 19% (If young and otherwise healthy) will still recover without problem with some rest and maybe some extra nebulizer treatments and very few will require hospitalization. Cardiac disease is the highest risk factor for severe complications anyway it appears.

(Partly os mainly) because the usage of ACE inhibitors ?

Maybe 19% claimed to have asthma for the purpose of getting a TUE.

The hoax crew has now moved on to anecdotal evidence. It is nothing but ignorant and disgraceful. There is evidence of lung scarring that may be permanent and cause complications down the road, even in young survivors.

um what about Cameron Van Der Burgh? He is VERY FIT, a Championship Swimmer and is struggling a residual cough and muscle weakness. Covid19 Is NO JOKE!

Residual cough and muscle weakness? Those are not severe symptoms. Post viral coughs can last for WEEKS with any upper respiratory infection.

I was not insinuating it was a joke. But the only people who post about their experience with it are the people who had it severe, and in the case of young healthy individuals, those are outliers. The millions of young individuals who had barely any symptoms will not be posting about it because no one cares. So when a couple well known athletes get it and post about it, it’s no surprise.

South Korea did massive widespread testing. They did find a lot of asymptomatic young people, but their statistics are not *that* different than what has been reported by other countries. I am skeptical about any argument based on hypothetical millions of asymptomatic people.

A lot of “asymtomatic” people wound up getting really sick a few days later. This virus has a pretty long incubation period. This paper (https://www.medrxiv.org/content/10.1101/2020.03.09.20033357v1.full.pdf) estimates that an infection takes around 23-24 days to resolve. The first 5-6 days the patient doesn’t show any symptoms. It takes an average of 5 days between the onset of symptoms and hospitalization, for those who need it. Finally it takes about 2… Read more »

Finally someone with real data. These are complicated issues, and unless you’re an epidemiologist or an expert in infectious diseases, your opinion is not worth anything.

What are they doing in training camps?

5
-5
Reply
anonymoose
Reply to  JP input is too short

Shane *is* the best Tusup joke.

Can we + this extra?

Take this seriously everyone, just be cautious. I don’t know how or why the WHO settled on the name COVID-19, but what the virus itself is actually called is SARS-CoV-2. SARS (Severe Acute Respiratory Syndrome) is quite nasty, as you can probably guess from the name.

The virus will continue to ravage the world for the coming months, and despite China and the CCP claiming victory over the virus in truth they have not been reporting cases that are asymptomatic, and more sisterly (fair warning: my source for this is an awesome YouTuber called Serpentza who has lived in China for over 12 years and though he has moved to the states fearing the CCP he still has friends… Read more »

As true as no case in Tajikistan or North Korea. Certainly.

I wonder what those 3 countries have in common…

I believe it was changed to avoid confusion with the original SARS virus.

Yeah but how does changing the name to coronavirus help with the confusion? The common cold is a coronavirus, as is SARS, as is MERS, and many other viruses. In all honesty I don’t see why they spent other a month finding a name for the virus when the name given to it by Chinese media, “Wuhan Coronavirus”, was perfectly fine, especially since there is a precedent for diseases to be named after geographical locations (Ebola, Spanish flu, Lyme Disease, MERS, ect…)

Then by returning soldiers . Hence like cruise ship passengers & tourists they were not popular . Truly awful after a truly awful war .

There is no definitive theory for were the Spanish flu started. In addition rural Kansas there is also a popular theory about northern China being the orgin point, and Great Britian is another popular theory.

Either way the Spanish flu is named after the geographical location “Spain”.

South Korea (a democracy) has done a good job of containing it so far.

Hope they all get well soon 🙏

Stay… home… When I told Ryan to stay home y’all blasted the dislikes and comments, are we just gonna realize how serious this is when half of our national team gets sick??

No one should be worried about the national team. Its grandpa and grandma and all the medical people I’m worried about.

About 50% of all cases in Austin are people between 20 and 40. We know that because they are sick, very sick. Many young peopel will end up in ICU and some of them on ventilator. Once you are on a ventilator, things get really serious. Errors cannot be made, but medical staff will be overworked, tired, overwhelmed, scarred, and lots of things can go wrong. Do not underestimate this virus, no matter how old you are. There will be few thousand of people between 20 annd 30 dead from coronavirus before this is all over.

Best wishes for a speedy recovery. This has to be a scary time for all.