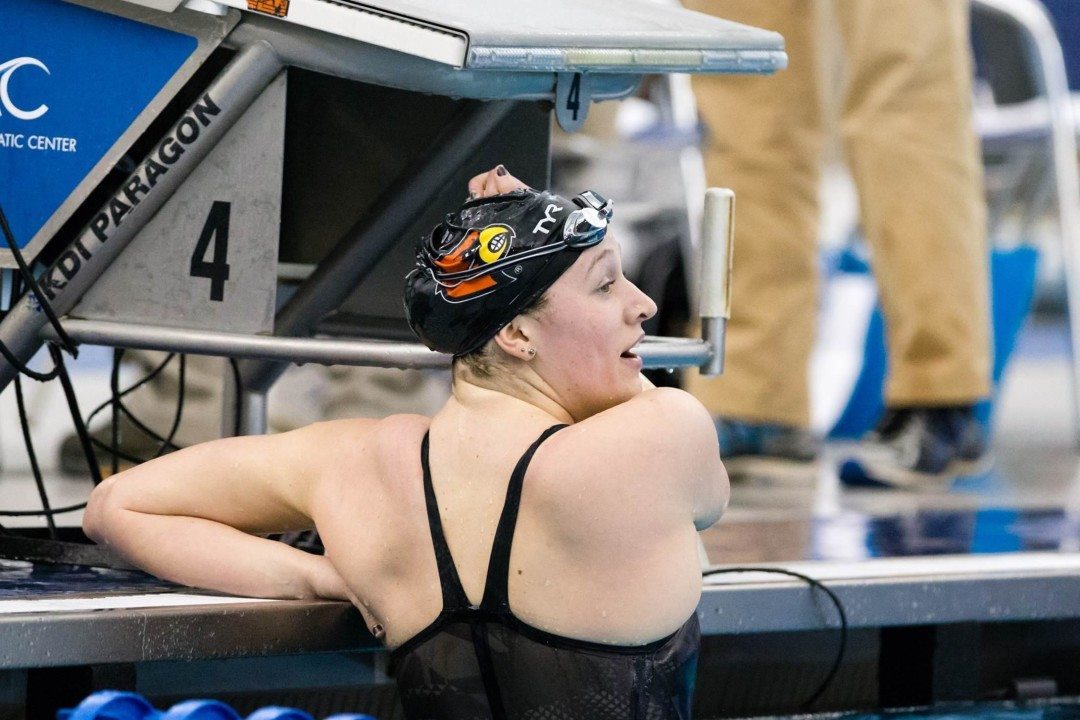 Abigail Houck (above) served as a student assistant at Louisville, and then spent 1 season as an assistant at IUPUI after her All-American swimming career. Archive photo via Tim Binning/TheSwimPictures.com

The University of Houston has announced the hiring of Abigail Houck as the new assistant coach for their women’s swimming & diving team. She takes over the position previously held by Hannah Burandt, who was hired a month ago as the new head coach at Cleveland State.

Houck comes to the program from IUPUI, where she was an assistant coach and head women’s recruiting coordinator in the 2018-2019 season. IUPUI’s head coach, Matt Bos, resigned at the end of last season, which usually results in staff turnover. Prior to that, she was a student assistant at Louisville and a 4-year swimmer for the Cardinals, where she was a 2-time CSCAA All-America award winner. Her time at Louisville overlapped with Houston head coach Ryan Wochomurka, who was formerly an assistant there.

The Cougars have won 3 consecutive AAC titles under Wochomurka’s watch.

More Details via the University of Houston Press Release, below:

In her role, Houck will assist with training as well as the day-to-day operations of the program.

“I am very excited to welcome Abbie to the Houston Swimming & Diving family,” says Wochomurka. “I have known Abbie for many years and knew she would be a great fit and add tremendous value to our program. She is an amazing on deck and technical coach, and I am eager for her to bring a fresh perspective to our student-athletes.

Perhaps most important is Abbie’s enthusiasm for our program and her innate ability to communicate and educate at a high level with potential and current athletes.”

Houck comes to Houston from IUPUI where she was the Assistant Swimming Coach and the Head Women’s Recruiting Coordinator during the 2018-19 season. In her role with the Jaguars, Houck handled recruiting efforts for the women’s team, created and executed all training plans and coordinated with the Head Coach on scheduling competitions as well as assisting with the day-to-day needs of the program. In her tenure at IUPUI, the Jaguars achieved their highest combined program finish at the Horizon League Championships, cultivated four conference champions and broke nine program records.

“I am so excited to join the University of Houston and be on deck with Ryan again,” said Houck. “I have known Ryan for seven years and I am so thankful for this opportunity that he and the athletic department have given me. I am ready to help build on the momentum they have created and know we can be even more successful. I’m looking forward to getting started and working with this amazing team.”

Prior to her stint at IUPUI, Houck served as the Student Assistant Coach at Louisville following a four-year career for the Cardinals. Houck closed out her career at Louisville as a two-time NCAA All-American and four-time All-ACC selection.

During her junior season, Houck scored 59 points at the ACC Championships as a finalist in the 500 Freestyle, 200 Freestyle and 200 Butterfly. Houck also swam on the 400 Freestyle Relay, helping the Cardinals close out the event in fourth-place.

Houck closed out her collegiate career with another appearance at the NCAA Championships competing in the 200 Freestyle and 200 Butterfly. Earning CSCAA First Team All-America honors and All-ACC Academic team honors.

The Colorado native swam for the North Jeffco Swim team, is a Colorado State Champion in the 500 Freestyle and a five time All-American in the 200 and 400 Freestyle. Houck graduated in 2017 from the University of Louisville with a Bachelors of Science in Sport Administration.

Any relation to Logan houck?

None that I could find, but I didn’t look that hard. Logan lists Vegas as his hometown, and Abigail Boulder, so probably not siblings? Abigail did have a sister play basketball at Saint Benedict College.

Logan has a sister, Hailey, who swam for Cal Poly SLO