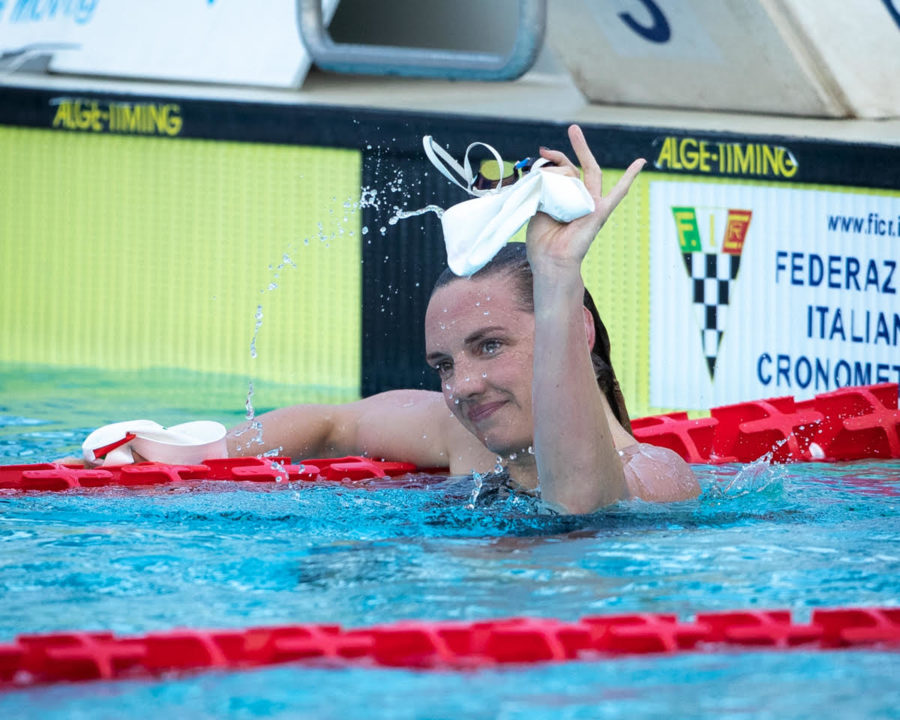 Multi-Olympic gold medalist Katinka Hosszu was a decisive winner once again, this time taking on the 200m IM field to collect another gold in Budapest. Archive photo via “Rafael/Domeyko Photography”

The 2019 FINA World Cup stop in Budapest closed out tonight with a bang, as several big names concluded the meet in fast fashion. Multi-Olympic gold medalist Katinka Hosszu was a decisive winner once again, this time taking on the 200m IM field to collect another gold.

Hosszu already laid waste to the 400m IM field last night in a time of 4:34.37 to win by over 7 seconds. While not quite so separated from the field tonight, the Hungarian Iron Lady still got the job done beautifully in the only sub-2:10 time of the final, touching in 2:09.56.

Hosszu was over a second faster in this same event at the Singapore stop to wrap up cluster #1. There she produced a winning effort of 2:08.63, while before that she registered a new World Cup Record with the 2:08.15 she put up at the Tokyo stop. Nonetheless, Hosszu still got her hand on the wall first and did what needed to be done to reap gold in front of her home crowd.

Runner-up in the women’s 200m IM this evening was Japan’s Rika Omoto and her time of 2:12.40, while Hungarian teammate Zsuzsanna Jakabos collected bronze in 2:13.46.

Once again it was a non-affair between Hosszu and her former coach/husband Shane Tusup‘s new protege, Ilaria Cusinato of Italy, as Cusinato placed 6th well back in 2:16.16.

Lithuania’s 400m freestyle victor from night 1 doubled up with a 200m free gold tonight in a head-turning time. Splitting 51.92/54.05, Rapsys blasted a winning effort of 1:45.97 to easily touch ahead of Hungary’s Kristof Milak, who registered 1:47.69 for silver. Rounding out the top 3 was Katsuhiro Matsumoto of Japan, the reigning World Championships silver medalist in this event.

Tonight, Matsumoto settled for bronze in 1:48.32, but his personal best is represented by his medal-producing performance in Gwangju, which rendered a mark of 1:45.22, a new Japanese National Record.

As for Milak, the newly-minted 200m fly World Record holder has said he will be taking a break from his pet event for a bit, which explains his competing in the backstroke and freestyle events here and not the fly. His 1:47.69 200m free time from tonight checks-in as the 19-year-old’s 3rd fastest ever, sitting only behind his PB of 1:46.90 from this past March and a 1:47.19 notching from when he took the 2017 European Junior Championships title.

Cate Campbell of Australia will soon be competing for London Roar in the International Swimming League (ISL), but the Aussie did her thing here in Budapest in the meantime.

Dutch Olympian Ranomi Kromowidjojo was also in the race, producing 53.81 for bronze.

Kromo’s teammate Arno Kamminga did major damage in the men’s 200m breast event, establishing himself as the winner by over 2 seconds. The 23-year-old World Championships swimmer notched the first sub-2:08 time of his career in 2:07.96 to take gold and lower his own Dutch national standard. You can read more about Kamminga’s impressive outing here.

As for Andrew and Tarasevich, the pair will soon be competing side-by-side, as both are members of the part-Andrew-owned New York Breakers ISL squad.

Spain’s Mireia Belmonte stepped onto the podium in the women’s 800m free, with the 200m fly Olympic champion rendering a mark of 8:31.42. That was enough to beat out Aussie Maddie Gough, the women who took the 400m free gold medal on night 1.

The Dutch combination of Kira Toussaint, Kamminga, Maarten Brzoskowski and Kromo collectively clocked a winning mixed medley relay mark of 3:48.03. Splits for the foursome included 1:00.57 for Toussaint, 58.82 for Kamminga, 54.53 for Brzowskowski and 54.11 for Kromo.

Japan’s squad of Irie, Miho Teramura, Omoto and Matsumoto combined for silver in a time of 3:49.02, while Russia’s squad of Mariia Kameneva, Vitalina Simonova, Daniil Pakhomov and Vladislav Grinev took bronze in 3:51.10.

Love the Tusup coverage! Please keep it up!

I am not sure if this much attention does Cusinato right, making her as Hosszu’s biggest rival at the present starts to resemble a soap opera. She is still young and time will show if she benefits from Tusup’s training or will succumb to it. IM is the most difficult/technical swimming event and a fast progress in it is not typical, she still has plenty of time to improve her weaker strokes. She did swim more than the two IM events 400m free 4:21.69, 200m breast 2:36,61, 50free 26,75, 200m free she skipped, 400IM, 100fly 1:01,38 and 200IM, but also others like Belmonte, Hosszu, Jakabos, etc had many swims (including more finals). It is hard to know if Cusinato swam… Read more »

Another example is Elizabeth Beisel. She always swam a ton of events at pro meets and then dropped a crap ton when tapered. She’s honestly still getting used to Tusups trainings and I’m sure she’ll be good when she needs to be.