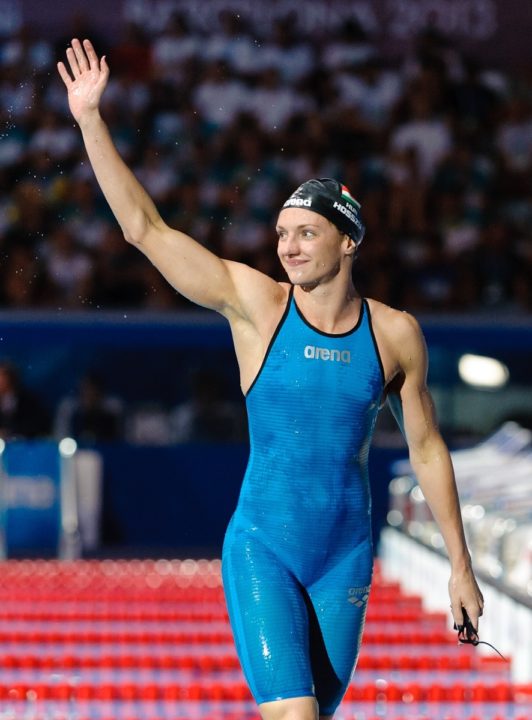 Yesterday seemed like an anomaly, a day at a World Cup event without Katinka Hosszu breaking a world record... (Photo Credit: Victor Puig) 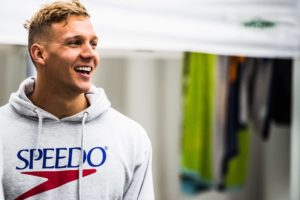 Yesterday seemed like an anomaly, a day at a World Cup event without Katinka Hosszu breaking a world record. She made sure that did not happen again today first breaking the 100 IM world record in the morning and coming back at night and breaking American Julia Smit‘s 2009 mark of 4:21.04 in the 400 IM posting a 4:20.85 winning the event by over eight seconds.

This is the Hungarian’s the sixth world record in four days of competition. She now holds the short course world records in the 100, 200 and 400 IM.

Hungarian Zsuzsanna Jakabos finished in a familiar spot behind Hosszu posting a 4:29.42 to collect the silver while Evelyn Verraszto completed the Hungarian sweep of the medals recording a 4:32.97 for the bronze.

After breaking the Camille Muffat‘s 800 freestyle world record yesterday Spaniard Mireia Belmonte Garcia came back tonight determined to wipe the Frenchwomen’s name from the record books completely. That is exactly what she did winning the women’s 400 freestyle in a time of 3:54.52 taking down Muffat’s 2012 record of 3:54.85. Lauren Boyle of New Zealand pushed the Spaniard the entire way, in fact she was ahead of her for 350 meters until Belmonte Garcia captured the lead swimming the final 50 meter split close to a second faster than the Kiwi. Boyle finished second posting a time of 3:55.31 followed by Melanie Costa Schmid who finished third in a time of 3:58.31.

Ranomi Kromowidjojo of the Netherlands dominated the women’s 100 freestyle finishing almost a full second ahead of her Dutch teammate Femke Heemskerk. Kromowidjojo won the event in a time of 51.28 breaking the Dutch national record of 51.35 set by Inge Dekker in 2009.

Heemskerk showed she was in great form by breaking the Dutch national record in the 200 freestyle on the first day of competition in Berlin did not have enough speed to stay with Kromowidjojo and eventually finished second in a time of 52.20. Sanderine Mainville broke the Canadian national record finishing third in a time of 52.41. Mainville broke the mark of 52.51 set by Victoria Poon in 2010.

Each time the Frenchman has gotten the best of his American teammate, but with each swim Dwyer has been inching closer and closer to Agnel.

Pawel Korzeniowski of Poland finished third in a time of 1:42.86.

Jamaican Alia Atkinson came close to making the sweep of the sprint breaststroke events in Eindhoven and Berlin, but had her winning streak broken up by Rikke Moeller Pederson of Denmark yesterday in the 100 breaststroke. Tonight Atkinson came back to defeat Pedersen in the 50 posting a time of 29.31. Pedersen finished second in a time of 30.00 followed by Caroline Ruhnau.

Just as they did in Eindhoven Italian Fabio Scozzoli and Hungarian Daniel Gyurta finished first and second in the men’s 100 breaststroke. Scozzoli won the event in a time of 56.58 followed by Gyurta who posted a time of 56.79.

German Marco Koch finished third in a time of 57.38.

Although American Tom Shields would have liked his success this summer to have been experienced in different venues he will enjoy achievements nonetheless. After missing the American World Championship team Shields went on to win the US Open 100 butterfly in a time of 51.65, which currently ranks the 22 year old eighth in the world and on the second day in Berlin he beat

Aya Terakawa of Japan has had a successful start to the World Cup series winning both the 50 and 100 backstroke events in Eindhoven and Berlin. Tonight in Berlin Terakawa took the women’s 100 backstroke in a time of 56.10. She was followed by Australian Emily Seebhom who posted a 56.59 and Simona Baumrtova of the Czech Republic who finished third in a time of 57.15.

As is the norm Hungarian Katinka Hosszu put together strong performances in two of swimming’s most gruelling events on the same day. After setting the world record in the 400 IM Hosszu returned to the pool to win the 200 butterfly in a time of 2:03.36.

Unlike the 400 IM this was not an easy win for the Hungarian.

At the halfway point she turned in fourth place, over a second behind Australian Ellen Gandy who set the pace. At the 150 meter mark she had made her way to third, but was still almost a half second behind Canadian Audrey Lacroix who had taken over the lead. Somehow though Hosszu had enough left in the tank to out swim both girls in the final 50 meters winning the event in a time of 2:03.36.

Australian Kenneth To won the men’s 200 IM in a time of 1:52.01 breaking his own national record time of 1:52.40, which he set winning the event in Eindhoven. To must of have been surprised to see Chad le Clos, who has not swum this race since 2011, in the event and even more surprised to have seen him in the final five meters of the race.

le Clos, whose previous best was 1:54.06, was over two seconds behind To after the breaststroke. Swimming his final 50 meters in a time of 25.72 the South African went from fourth to second finishing only a tenth of a second behind the Australian posting a time of 1:52.11.

South African Roland Schoeman had won the 50 breaststroke and 50 butterfly heading into the 50 freestyle, where he picked up his third gold of the competition. Schoeman who finished seventh in Barcelona and fourth in Eindhoven posted a 20.86

Rikke Moeller Pedersen of Denmark picked up the win in the women’s 200 breaststroke in a time of 2:15.93 breaking her own Danish record time of 2:16.08, a record she set at the World Short Course Championships in December.

Katinka Hosszu won her third event of the evening taking the women’s 100 IM in a time of 57.74. Hosszu was not able to match the world record of 57.45 which she swum in the morning.

Radoslaw Kawecki of Poland finished ahead of American Tyler Clary to the men’s 200 backstroke in Eindhoven and which happened once again in Berlin. Kawecki won the event in a time of 1:47.63 just under a second ahead of Clary who finished second posting a time of 1:48.60.

Hackett’s 14:!0 remains safe as the current longest standing WR.
I wonder if sun Yang has any plan to break it.