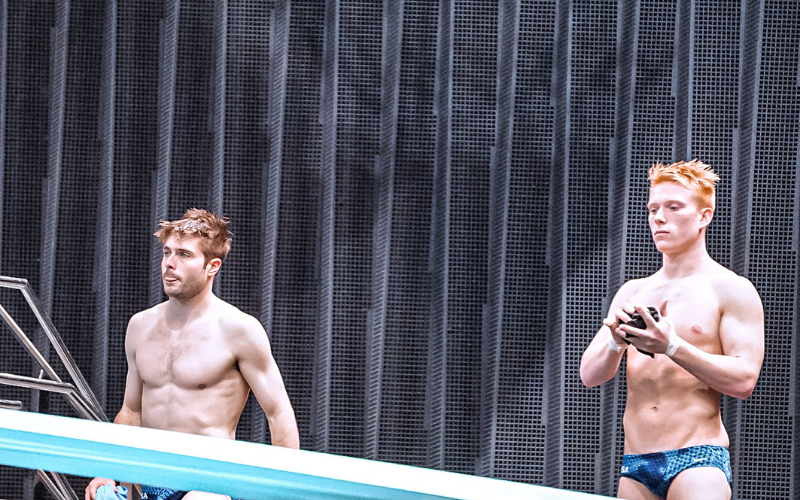 Hixon and Capobianco finished with a cumulative score of 414.18, earning fourth place and merely a point and a half out of the bronze medal position. Current photo via USA Diving

After qualifying fourth into the finals, the duo switched out their final dive from a front three- and one-half pike to a front four and a half tuck scoring an 83.22 on top of their score from their fourth and best dive, an inward three- and one-half tuck which scored a 84.66. They finished their list with a cumulative score of 414.18, earning fourth place and merely a point and a half out of the bronze medal position.

“Tonight was really special for Mike and I,” said Capobianco, “We haven’t necessarily had all the preparation that we wanted leading into this but we showed a lot of heart and fight, which makes us feel really confident moving forward. It is such an honor to have gotten the call to compete for the Olympic quota spot and I’m just so excited that we did our job. I also want to send a shoutout to everyone back home who stayed up to watch and cheer – love you guys!”

“Mike and Andrew had a fantastic day today,” said Dan Laak, High Performance Director for USA Diving, “Going into the competition we knew that they had the dives and as long as they were able to execute, we had a great shot at qualifying. As always, they were calm under pressure and true professionals. We are extremely proud of their finish today and are looking forward to our final four days of competition.”

All preliminary events will be live streamed on fina.org well as their YouTube Channel. The finals will be broadcast live on the Olympic Channel.

What is a quota spot?

Just a qualification spot awarded to a nation.

So China has the maximum 12 quota spots, because the most entries in diving a nation can have is 12, and they earned them all via top finishes at the World Championships. But not every country can have 12.

It’s just a different way they describe the qualification system in diving, since qualifying spots are awarded to nations, not athletes. If the American men show up at the US Diving National Championships this summer and on 10-meter score perfect 10s with max degree of difficulty on every dive, they still don’t go to the Olympics.

So sad. diving is so subjective. It’s all about who is on the judging panel. And uni’s that have great divers don’t want them to miss big collegiate meets to help the country qualify more divers for international meets.
#diversmatter *why do divers only count for half a person at NCAA’s?