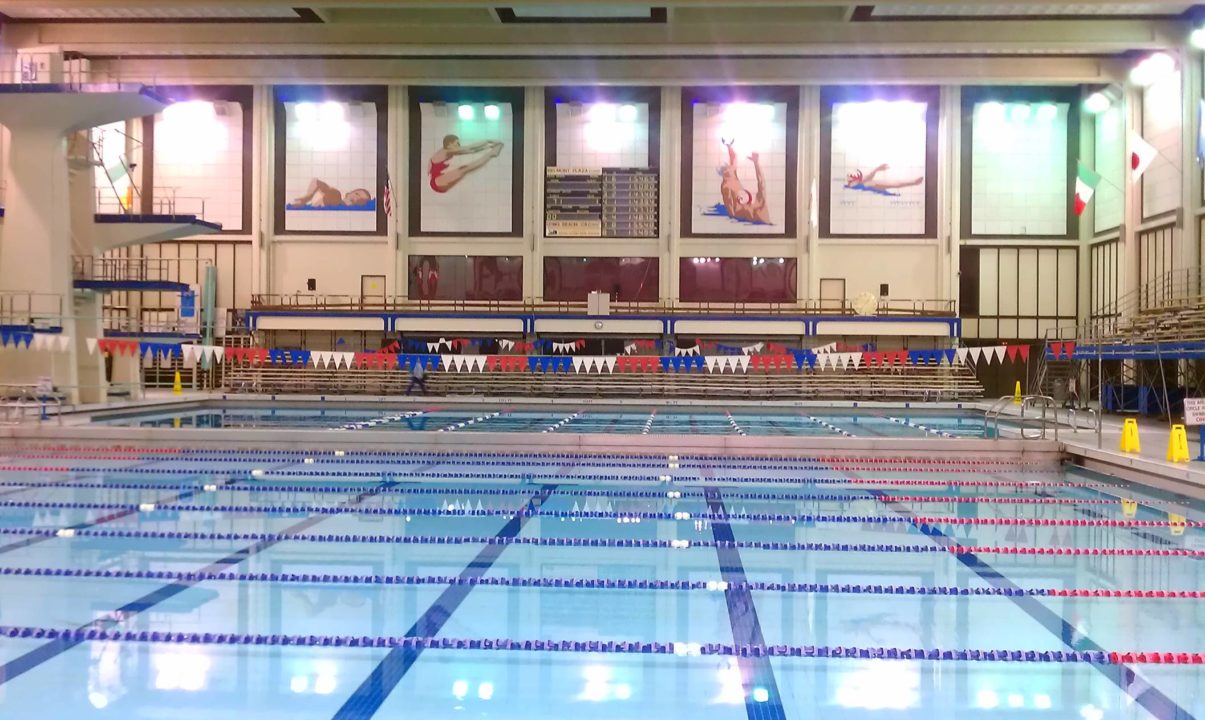 The murals hanging above the indoor competition pool at Belmont Plaza are now unlikely to be salvaged for any kind of a fundraising auction because of challenging logistics. Archive photo via Katie Rowe

The demolition of the building that hosted the old Belmont Pool will begin in late September, and hopes by local organizers to salvage some of the hallmark parts of the building are growing increasingly unlikely.

While some items will be removed, such as the original dedication plaque as well as the pictures and trophies in the front lobby, others icons like the murals that overlook the pool, and the pool tiles themselves, could not be reasonably saved.

For the murals, when exploring the possibility of salvage, it was discovered that they were not painted on ceramic tiles as was expected. Instead, they were painted on “acoustic tiles” like those typically used on ceilings.

After decades hanging in the damp environment of a pool, these murals may not even survive any effort to save them, thus making the city balk at the $20,000 price tag set for their removal. There is a search, however, for the original artist (the murals were not signed) and perhaps a recreation attempt in the new facility.

As for the pool tiles, which organizers had hoped could be used as a fundraising effort to raise money to finish off the new pool, it turns out that the tiles in both the pool and the locker room were made with lead, as was standard practice at the time for ceramic tiles. The hazard associated with lead adds a whole new layer of complexity to any salvage efforts.

For most of the interior, the plan will be to demolish the building and sort through the rubble to see if anything worth saving came out alive.

There is currently conversations as to whether an effort to save the flag poles and flags inside the pool would be worth the effort. According to Lucy Johnson, the quoted cost to salvage the flags was $1,400. They are currently exploring whether or not there is enough interest in purchasing those flags by fans to warrant the expenditure – the flags are not original, and were replaced about 10 years ago.

The Belmont Plaza pool was built in 1968 and hosted the 1968 and 1976 U.S. Olympic swimming trials, the 1974 and 1978 NCAA swimming championships, several editions of the NCAA water polo championships, and a number of other high-level events. Though it had long lost it’s spot on the national circuit, it was a crucial part of the Pac Ten/Pac-12, and broader Southern California, swimming infrastructure as one of the only options for indoor long course championship swimming in the region.

After several years of uncertainty about the viability of continued use at the 40-year old facility, in early 2013 the City of Long Beach officially announced that the pool would be closed for good. Since then, local government officials and leaders within the swimming community have been working toward a permanent replacement for Belmont. While there are still some details of that permanent plan that are being negotiated, a temporary outdoor 50 meter pool has been constructed in the facility’s parking lot to satisfy the needs of the local community until the new indoor facility is complete.

Perhaps this was discussed in an earlier article, but where is Belmont pool, and what makes it historic?

Dan, what makes the pool so historic is the fact that since 1968, when it hosted the men’s Olympic trials, the greatest swimmers in history have competed there (including the GOAT). Twice the pool hosted the Olympic trials (1968 and 1976) as well as national championships (both long course and short course). The NCAAs have been held there. CIF high school championships. Pac-8/10 and 12 championships for both men and women. The PCAA championships, etc. Countless world, American, NCAA and national age-group records……I could go on and on and on but hopefully you get the idea why so many SwimSwam fans are going to really feel a tug in their hearts when the pool is gone. We have our own… Read more »

I forgot to mention the pool also hosted the 1975 World Championships Team Trials.

Uh, how did this comment merit a negative? LOL LOL LOL

PAC12BACKER – remember that it’s been a while since anything of significance happened at Belmont, so for a young swimmer, especially one from the east coast like Danjohnrob, the history of Belmont hasn’t been drilled into their brains since they were in diapers.

And if such a young swimmer can’t come to SwimSwam to try and learn more about the history of this magnificent place, then where else should they go?

danjohnrob – I went through and added some more information about the back story.

Thanks for your rude reply! Nowhere in the article does it say the pool is in CA, never mind Long Beach. I can only assume it was the location of many championship swim meets, perhaps even an Olympic Trials. Do you honestly believe the name “Belmont Pool” is a known throughout the US, never mind the world, along with the history of the place? I was expressing interest; obviously Braden thought it was significant enough to warrant his attention, and I wanted to know why.

It was just a question to see if you were serious or not. Thin skin, eh?