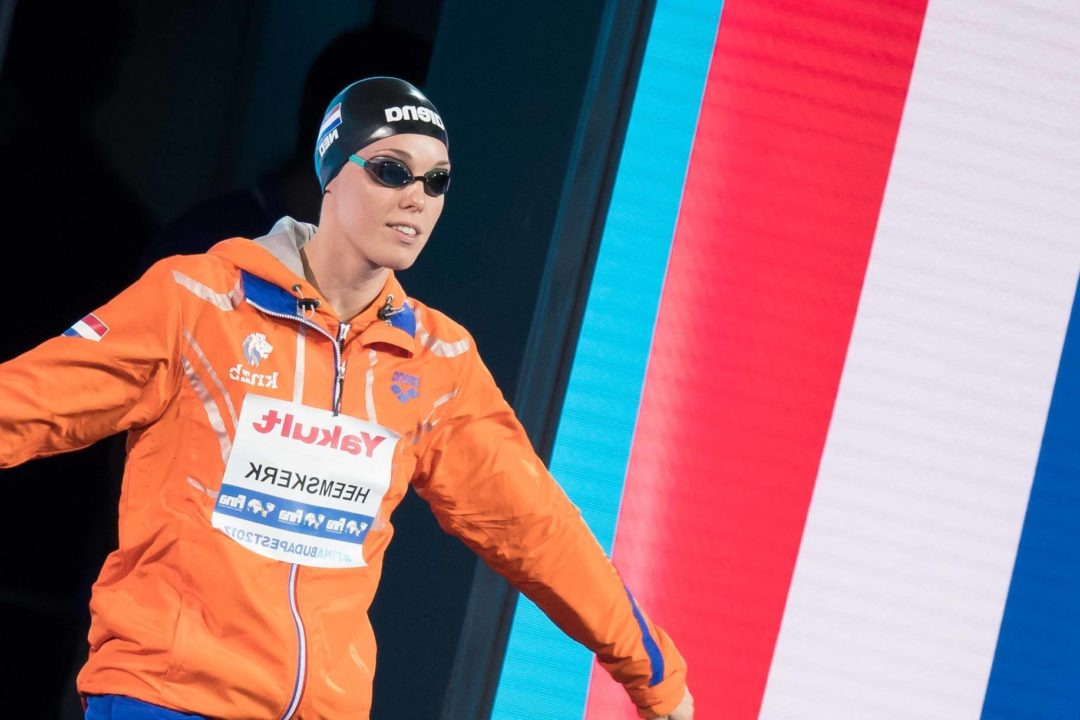 The Swim Cup – The Hague kicked off today in Netherlands, with stars such as Femke Heemskerk, Ranomi Kromowidjojo and Jesse Puts taking to the pool vying for spots on the nation’s roster for this summer’s World Championships. Swimmers will also get a shot at qualifying at the Swim Cup Eindhoven taking place next week.

Swimmers could have also identified a competition of their choice that takes place January through April of this year, as Kira Toussaint did with the FFN Golden Tour Camille Muffat – Marseille.

As a refresher, here are the KNZB-dictated selection standards per individual event, keeping in mind the finals here in The Hague are in the morning, with prelims at night.

Hitting her mark in the women’s 200m freestyle right off the bat was Heemskerk, as the Olympic medalist registered a prelims time last night of 1:56.48 for a new meet record. That cleared the qualifying standard of 1;57.12 by a mile and inserts Heemskerk into the world rankings as the 3rd fastest swimmer this season.

But, Heemskerk wound up being slower in the final. This morning in The Hague, Heemskerk hit 1:57.32, off the QT. But, I confirmed with Heemskerk that her prelims time gives the 31-year-old racing veteran a chance to improve upon her 9th place finish in this event at the 2017 edition of the World Championships in Budapest.

Behind Heemskerk tonight were Marjolein Delno and Julia Mrozinski, who touched in 1:59.77 and 1:59.94, respectively, to round out the only other competitors under 2:00 in the race.

The men’s 200m free saw Kyle Stolk surge to the all first in a near-personal best time of 1:47.90, while Poul Zellmann touched just over half a second later in 1:48.47 and Maarten Brzoskowski collected bronze in 1:48.65. None of the men cleared the 1:46.68 QT to race this individually in Gwangju.

Arno Kamminga got the job done in the men’s 200m breaststroke, however, dipping under the 2:10.15 KNZB standard with a winning effort of 2:09.95. That outing places the Dutch national record holder just outside the top 10 performers in the world this season and falls just .01 shy of the 2:09.94 he produced in the semi-finals of this event in Budapest back in 2017.

Kamminga has since lowered the national record to 2:08.70, a mark he set at the Swim Cup – Eindhoven last year.

For her part, Kromo was in the water with the women’s 50m fly field, where the Olympian clocked a winning effort of 25.98, good enough for a new meet record. It wasn’t good enough to hit the individual qualifying mark for Gwangju, however, as her sub-26 second mark fell shy by a just .07.

Kromo is now ranked 5th in the world in this sprint event.

Kira Toussaint already nailed a World Championships qualifying mark of 58.92 at the FFN Golden Tour Camille Mouffat in Marseille. Tonight, the vindicated athlete touched in 1:00.00 to win the event over Maaike De Waard, who settled for silver less than a second later in 1:00.73.

Toussaint’s time once again cleared the Worlds QT of 1:00.18, but she’s the only qualifier.

When at the age of 27 the finest sprinter Femke Heemskerk became suddenly the 3rd fastest ever swimmer in 200free event I thought that it was her swan song just prior retirement. She did it completely unexpectedly to everybody including herself in the intermediate April meet. To this day it is the only case of 1:54 result done with the negative splits. Well, 4 years later she is still racing and still is very good.