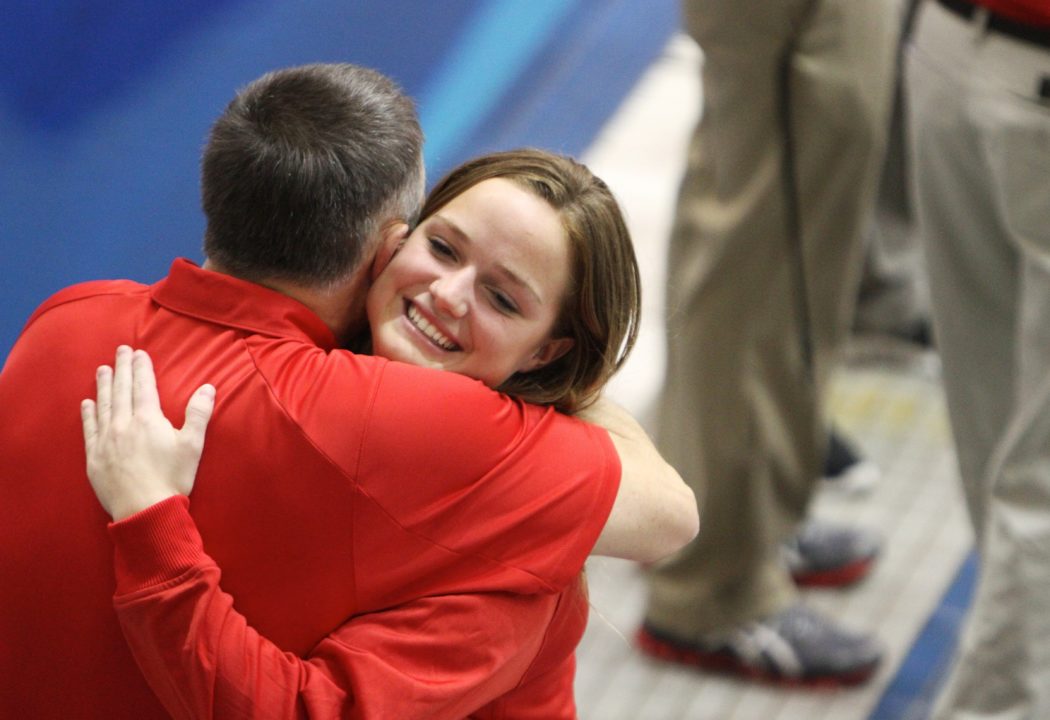 The Georgia Bulldogs have celebrated their second major milestone without their leader Jack Bauerle present. First, it was Bauerle’s 500th win, and now they’ve had to push through senior day with no Bauerle there to lead them, and still not many answers on what’s happening with a university investigation.

Note that Alabama was also without their head coach, Dennis Pursley, who was suspended for the meet after an NCAA secondary violation.

Still, the Bulldogs are swimming extremely well, and seem mentally engaged in their meets despite Bauerle’s absence. The Georgia women won by a score of 181-102, and the men took their side of the meet 164.5-116.5.

The day began with a Georgia 1:40.71 in the 200 medley relay that included a 27.58 from Melanie Margalis on the breaststroke leg.

Margalis has been spectacular all season, and that didn’t change much in the Bulldogs’ final meet. She won the 100 breast (1:00.76) and the 200 breast (2:13.99) individually for Georgia, in addition to her win in the medley.

Georgia has some options about where to go with Margalis at SEC’s and NCAA’s with her three events. She’s been great this year in both breaststrokes, both IM’s, and the 200 freestyle, and could score in any three of those five events.

There were some other Bulldogs who won races that were a bit more of a surprise at this meet. Georgia freshman Kim John-Williams won the women’s 100 back in 55.14, topping National Teamer Olivia Smoliga 55.14-55.38. While that’s probably not enough to change anybody’s mind about who will swim the medley relay, it should be a huge confidence-booster for John-Williams as Georgia’s SEC title defense chances will greatly increase if she can sneak into the A-final at SEC’s.

Georgia’s Lauren Harrington swam well to beat Smoliga as well in the 50 free, with a 23.29. Harrington wound up scratching the 100 fly, which is a tad disappointing as it would have been good to get one more data point on her in that race headed into championship season. She’s got a chance at winning the NCAA title, but still isn’t viewed as a huge name nationally in the butterfly races.

Alabama’s star Kristel Vourna, a Greek Olympian, had two great individual swims as well. She was first a 2:02.66 in the 200 fly; while she was only 5th there (behind 4 Georgia swimmers, including Nicole Vernon in 1:59.97), that was a season-best time for her.

The Georgia senior swimmers weren’t the only ones who swam well on their honor day. Georgia’s two senior divers, who have become a big part of this program, went 1-2 in the diving events. Laura Ryan was a 360.30 to win the 3-meter, and Ann-Perry Blank won the 1-meter in 327.98.

The Georgia men, meanwhile, were led by their World Championship swimmers Fink. Kalisz, Gemmell, and Koski, to their victory.

In the 200 medley relay, Georgia was a 1:28.21 for the win, followed by Alabama in 1:29.45. That relay was anchored by a very good 19.79 in the 50 yard free from Michael Trice. After Matt Ellis transferred at the end of last season, it wasn’t clear who Georgia’s relay anchor would be, but Trice has come through with flying colors.

Kalisz was also on that 200 medley relay, where he was actually outsplit by Alabama’s Pavel Romanov.

The two would face-off again in the 100 yard breaststroke, and there while Romanov once again had a better 50, Fink came back strong on the second-half of the race to win a 55.88. Romanov came in 2nd in 56.21.

The 200 fly is not likely to be an NCAA event for the defending 400 IM champion Kalisz, but it’s still an event that he’s become incredible in this season. His improvements in that race and the 200 back make him a prohibitive favorite at NCAA’s in the 400 IM, and also gives him a reasonsable chance at Tyler Clary’s NCAA record.

Georgia’s distance group is coming together well. Andrew Gemmell won the 1000 free in 9:09.30, followed by Garrett Powell (9:13.68) and Will Freeman (9:17.69). For Gemmell, that’s about four seconds better than he was in his last meet going into last year’s SEC Championwship, while Powell was about the same.

Similarly, in the 500 free, Matias Koski is set up to defend his SEC title with a 4:26.02, with Gemmell taking 2nd in 4:27.79. That’s faster than Koski was on the first weekend of January in 2013 before that somewhat surprising SEC title for him. He won’t catch anyone by surprise this year.

Where the Georgia distance group is coming together well, the Alabama sprint group similarly looks good. Kristian Gkolomeev swam a 45.08 to win the men’s 100 free, with Trice placing 2nd in 45.35. Alabama’s top swimmer BJ Hornikel took 3rd in that race in 45.40.

Can anyone shed some light on why BOTH coaches were suspended from competition?