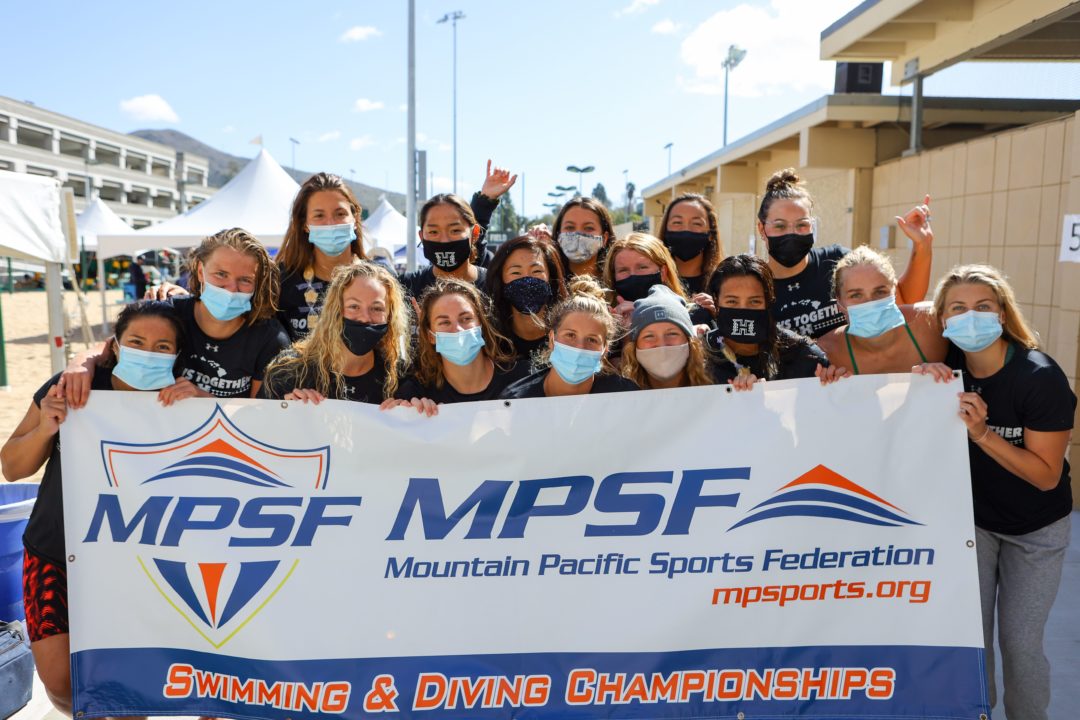 The University of Hawaii women concluded the 2021 MPSF Championships by winning their 5th consecutive MPSF Championship title. Throughout the meet, they were chased most closely by BYU. But, ultimately the ‘Bows claimed victory by 67 points.

BYU’s Katie McBratney had a tremendous swim in the 200 breast, touching the wall 1st with the fastest time ever swam in BYU program history (2:11.44). She also set a new MPSF Championship record, breaking her teammate Kionna Clayton‘s 2:11.59 from last year.

McBratney finished with a 4 second lead over the field and took down her previous lifetime best, set at last season’s MPSF Championships, by nearly a full second. In 2nd place was Hawaii’s Katie Strachan who also clocked a best time, dropping 4 seconds from the time that earned her 16th place last season.

Anna Friedrich clocked Hawaii’s first victory of the morning, winning the 200 back with a time of 1:57.72 and out touching UCSB’s Dani Carter by .18.  This was about 2 seconds off Friedrich’s lifetime best which placed her 2nd at last year’s Championships. Hawaii took 1st, 4th, 5th, 7th, and 8th place in the ‘A’ final.

Anna Kotonen kept the ‘Bow momentum going by taking 1st place in the 100 free (49.85), upsetting last year’s defending champion Gwen Gustafson from BYU (49.94). Kotonen outdid the lifetime best she swam last month on a relay split by .04. She had placed 7th in this event last year.

Lawrence ended the meet by leading a 1-2 finish for UCSB in the 200 fly alongside Molly McCance. The two touched the wall at 2:01.88 and 2:01.95, respectively. Lawrence was one second off her lifetime best and McCance came within .60 of her best time, both from last year’s Championships.

In true Championship meet style, the final event came down to one-hundredth of a second. BYU’s 400 free relay of McBratney, Brynn Sproul, Rachel Oyler, and Gustafsen claimed victory with a time of 3:20.85. In 2nd place, Hawaii’s Kotonen had taken out the first 100 yards a second faster than BYU, but the Cougars were able to tear down that lead leg-by-leg.