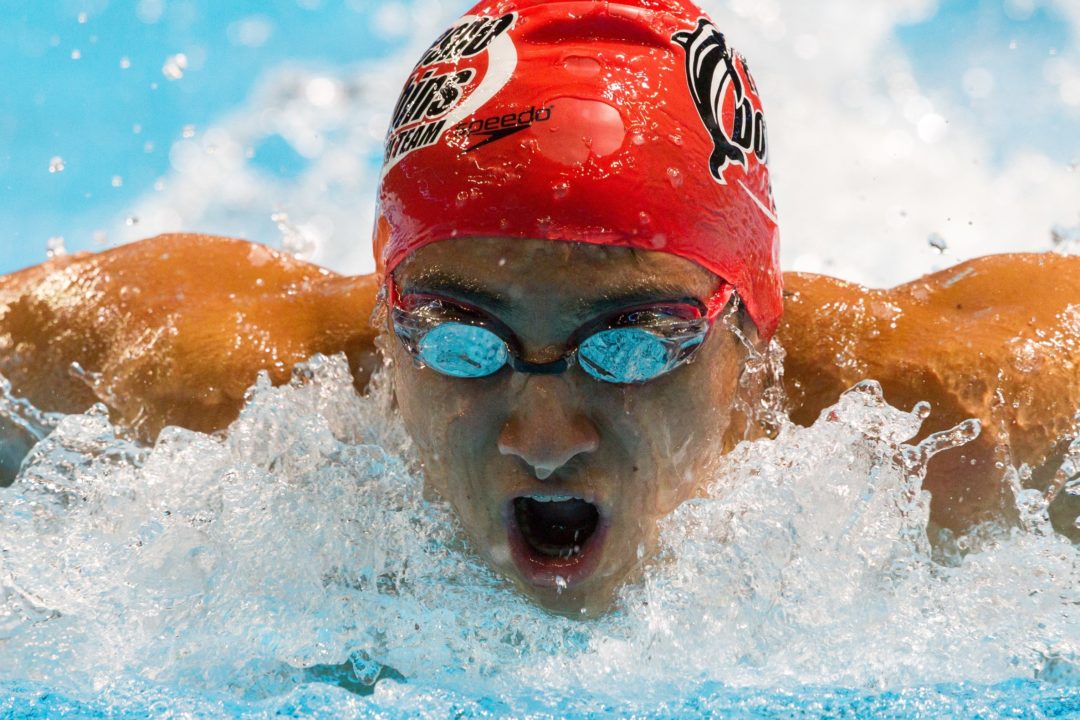 Justin Wright will lead a team of 6 (so far) to the 2014 Youth Olympic Games in Nanjing, China. Archive photo via Tim Binning/TheSwimPictures.com

USA Swimming has announced a 6-member roster for the 2014 Youth Olympic Games in Nanjing, China that will run from August 17th-22nd. This is two fewer than the 8 that they were allocated by FINA for the second edition of these Youth Olympic Games based on the country’s finish at the 2013 World Championships. The announcement left a caveat that they “could potentially” add two additional team members at a later date depending on final qualifications of all sports.

The difference is accounted for by the fact that there is a limit to the number of athletes that Team USA can send across all sports, resulting in 6 spots at this point instead of 8, but a USA Swimming spokesperson didn’t immediately have details on how those were allocated.

If those two other spots are not filled, then the United States would be limited to only co-ed relays in Nanjing, though they didn’t wind up winning any relay medals in single gender or co-ed races at the meet’s first edition in 2010.

This year, the Americans will be trying to out-do the 10th-place medal count (1 gold, 2 silvers) from Singapore, where USA Swimming was still skeptical about the meet. This year, however, qualified athletes were given a choice to pick the Youth Olympic Games over Jr. Pan Pacs, which has resulted in a roster that should be much more competitive. Then again, the field will be much more competitive as well.

A breakdown of where each swimmer’s best time would’ve wound up in 2010, representing a good target for the medal count:

The women’s roster is very heavy on backstrokers, which will create some internal competition for podium spots. In the men’s side, Wright has a good chance of medaling in the fly events, but the comparison is a little skewed by an unusually deep butterfly group at the 2010 meet (Bence Biczo, Chad le Clos, Marcin Cieslak, Dylan Bosch, Velimir Stjepanovic).

These rosters were chosen based on a ranking of best times from the 2013 U.S. Open, 2013 Junior Nationals, and the long course Grand Prix meets so far. They were then ranked in the FINA rankings, and those with the highest rankings in an Olympic event were chosen (among those who didn’t decline to focus on Pan Pacs or Jr. Pan Pacs).

What about Michael Andrew???

Rules are rules. Just looking for a logical explanation. The criteria for qualification is laid out.

I’ll let you read the rules and interpret the times and world rankings for yourself.

I believe conaton has a higher world ranking overall (including 18+) within the qualifying period. also if andrew’s highest ranking event is the 50 fly, it would not count as it is not a olympic event.

Probably by Next Jr Worls Andrew wil be ready and will quali easily.. but he got no chance on beating 17 18 years old boys now… at least not the world best 17 18 years old

After looking and digging into the criteria, I don’t understand how Andrew isn’t on the list. Could politics or training philosophy be playing a roll?

Andrew was not even close on being a quali for Youth.. unless he do something great.. his time are still not on the level for Youth Olympics..

Bobo – USA swimming sent out a request to the potential Youth Olympic Team members a few weeks ago to ask for an accept/decline for the team. I think they wanted to lock the team in early. At that point, those who declined did so to focus on Jr or Sr Pan Pac hopes.

Hannah Moore has looked great this season, looking forward to seeing what she can do.

In my opinion Clara Smiddy could surprise some people at the US nationals in the 200 back.
She has improved a lot in the last 12 months.
On paper Missy of course and both Elizabeth are ahead but if one Elizabeth isn’t at her best (slower than 2.07), Miss Smiddy could grab the third qualifying spot for Pan Pacs.

Of course if she swims at the US nationals.
If yes and if she qualifies in the US team, I presume she would swim at the Pan Pacs rather than at the youth olympic games which are the same week. I presume.