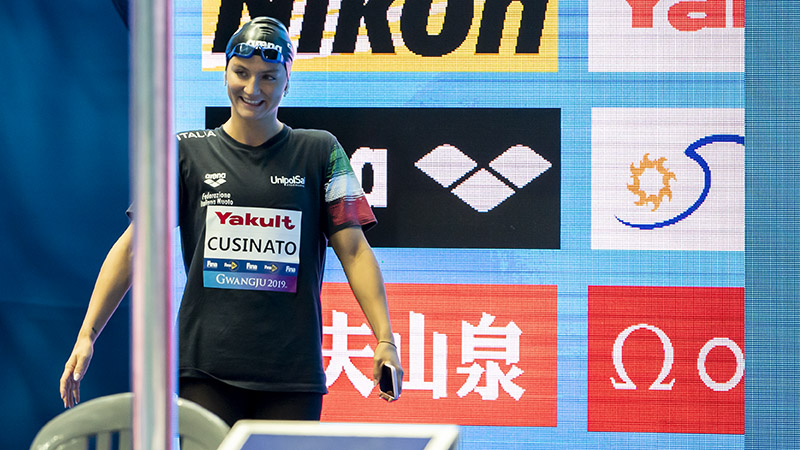 In between episodes, Ilaria Cusinato announced her withdrawal from the International Swimming League as she focuses on the 2020 Olympics. Archive photo via Giorgio Scala / Deepbluemedia / Insidefoto

The next updates to the Olympic Darkhorse series are here, with episodes 7 and 8. In between episodes, Ilaria Cusinato announced her withdrawal from the International Swimming League, where she had initially joined the Rome-based team the Aqua Centurions.

In Episode 7, we see more action from the pool as Cusinato and Zsombor Bujdoso continue their workouts. A lot of the footage is of the two swimmers and Tusup in the indoor pool working on start technique and body entry into the water. They also head out to the outdoor pool, pushing through more grueling sets and doing some swims for times. At the end of the video, Tusup tells Cusinato that he wants her to break the World Record, not just win gold, though it’s unclear which event he’s referring to (probably the 400 IM, which has felt like their focus, and which is arguably Cusinato’s best event). They high five at the end of the set and video after Tusup calls her performance in the set she had just done a ‘breakthrough.’

Episode 8 has a lot more gym footage of the swimmers training and lifting. It’s week three, and Tusup notes their soreness and how broken down they are. He says they’ll curb the weights a bit so they can let the muscles recover and focus a little more on work in the pool.

Thanks, Karl, for watching these and taking one for the team. The still shots of Ep 7 (Melania looking at Justin Trudeau) and Ep 8 (Gym Bro) are enough for me.

when he threw the pull buoy at her, I felt that 🙁