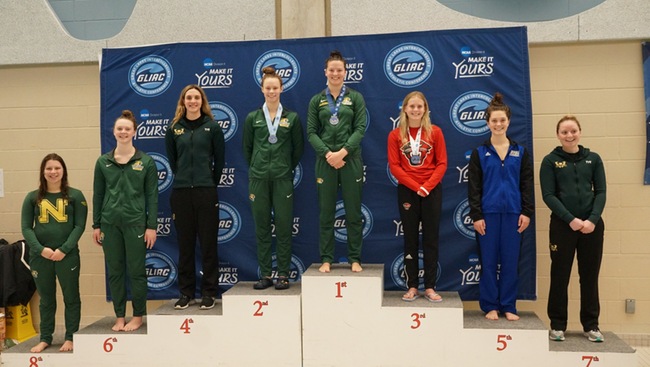 The Laker men lead the way with 190 points, followed by Wayne State (178), while the Wildcat women lead with 238.5 to GVSU's 204.5. Current photo via Northern Michigan Athletics

Grand Valley State completed day one at the 2020 GLIAC Swimming & Diving Championships at Saginaw Valley State. The Laker men lead the way with 190 points, followed by Wayne State (178) and Northern Michigan (123). The GVSU women are second (177.5), behind Northern Michigan (206.5) and in front of Wayne State (154.5). The GLIAC Championships will run through Saturday (Feb. 22).

200 Medley Relay – The Lakers’ relay team of Shalamon, Hawkins, Saura Armengol and Novikau hit the NCAA A cut with a time of 1:28.85.

SAGINAW, Mich. – The Northern Michigan University Swim and Dive teams embarked in the 2020 Great Lakes Intercollegiate Athletic Conference Championships Wednesday. Through their first day of finals, the women’s team won two events and stand in first with 206.5 points while the men hold third with 123 points.

The 1000-yard freestyle proved to be a proud event for the Wildcats as both the men and women teams were among the top. On the women’s side, junior Gabriella Spajic (Sydney, Australia) claimed second place overall, touching the wall at 10:10.62. Following close behind was freshman Maria Arakelian (Livonia, Mich.) who finished with a time of 10:17.02. For the men, junior Ondrej Zach (Rudolfov, Czech Republic) placed second with a time of 9:16.82.

The men also had success in the 200-yard individual medley, with three individuals placing in the top eight. Freshman Erikas Kapocius (Ignalina, Lithuania) hit the wall at 1:50.68 to claim fifth, followed immediately by sophomore Filpe Lemos (Curitiba, Brazil) at 1:52.60. Senior Jonas Reinhold (Nienhagen, Germany) finished the trend by touching seventh with a time of 1:53.47.

Junior Margaret Vaitkus (Munster, Ind.) took the 50-yard freestyle for the Wildcats, finishing in 23.51. Senior Lajos Budai (Kecskemet, Hungary) made the podium for the men, placing sixth with a time of 20.52.

Sophomore Mary Grossman (Goshen, Ind.) led the Wildcats in the women’s 3-meter dive. Grossman finished with a score of 441.95 to take second overall. Following her was freshman Amanda Baird (Riverside, Calif.) finished in fourth with 408.30 points, and senior Jamie Kimble (Prior Lake, Minn.) with 398.60 points to take seventh.