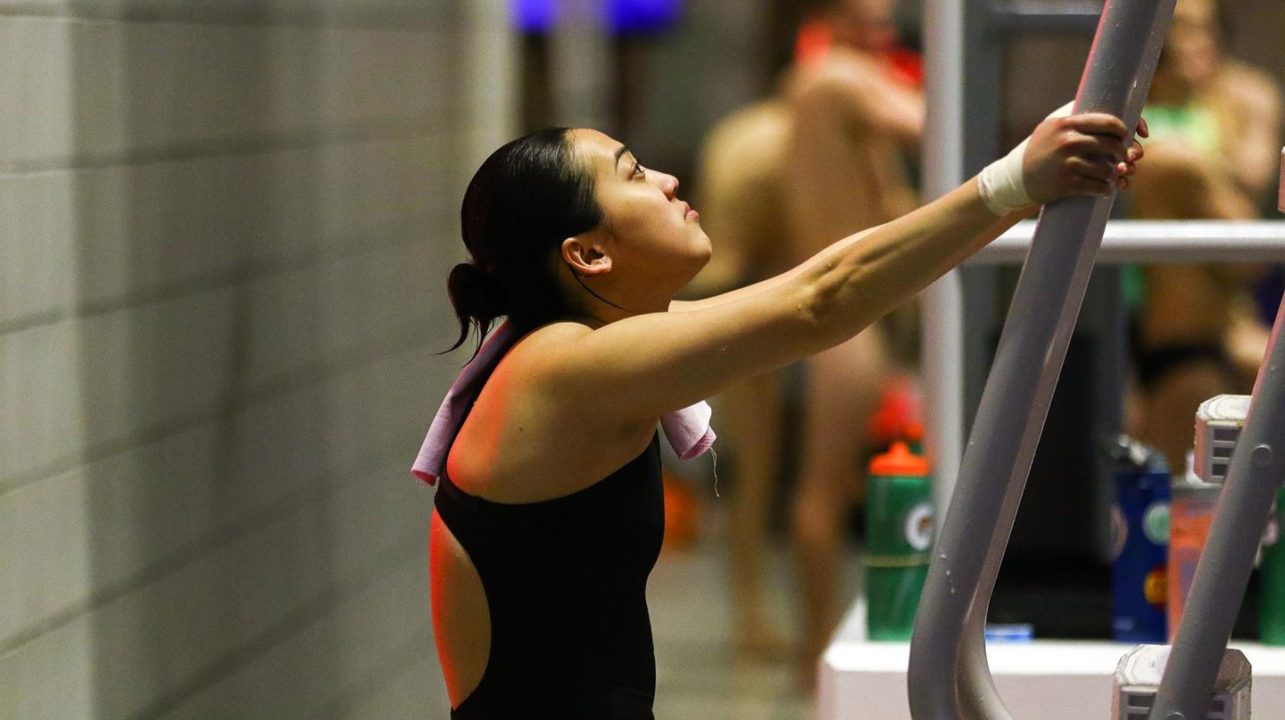 Georgia's Freida Lim and Virginia's Walker Creedon walked away with Platform wins on the final day of the 2020 Tennessee Diving Invitational. Current photo via Georgia Athletics

KNOXVILLE, Tenn. – Senior Freida Lim’s second victory of the season on the women’s platform highlighted the final day of competition for University of Georgia diving in the Tennessee Diving Invitational Sunday afternoon at the Allan Jones Aquatic Center.

With a score of 276.85, Lim, an Honorable Mention All-American last season on the platform, took first by over 24 points over runner-up Alison Maillard of Auburn. Earlier this season, Lim placed first on the platform at the Tennessee Invitational with a mark of 261.60. Elsewhere for the Lady Bulldogs, sophomore Kelliann Howell finished 22nd with a score of 192.15, followed by redshirt sophomore Ambria D’Alonzo in 25th place (189.05) and freshman Raquel Mason in 26th (187.65).

In the men’s event, junior Zach Allen finished his solid weekend with a 15th-place score of 236.95. Virginia’s Walker Creedon took first overall with a score of 332.80.

The full Georgia swimming and diving team returns this weekend for their home opener against M No. 4 / W No. 19 Texas A&M on Saturday, Jan. 11 at 10 a.m. at Gabrielsen Natatorium.

Knoxville, Tenn. –  Sophomore Walker Creedon (Cary, N.C.) recorded the top score on the men’s platform to lead the Virginia men’s and women’s diving teams on the final day of the Tennessee Diving Invitational at the Jones Aquatic Center.

Creedon won the men’s platform, recording a score of 332.80. He topped the event by over 20 points.

“I’m really proud of all of our divers for their work this weekend,” head diving coach Drew Livingston said. “In terms of attitude and effort, they put it out there and we’re leaving Knoxville with some good results and plenty of positives.

“Walker (Creedon) did a great job this morning snagging the win. He absolutely feels like he left some points on the board, but this was his best performance of the year so far and (he) keeps improving. The women all did a great job as well. We’re still putting some pieces together on platform, but this was another step in the right direction for everyone. I can’t wait to get this group back to Charlottesville to get back to work and keep progressing towards the postseason.”

“Our divers continue to impress and improve week-to-week,” head coach Todd DeSorbo said. “Our senior leadership on the women’s side with Sydney Dusel is getting stronger and she’s really hitting her stride this back half of the season with two second-place finishes. The rest of the women’s squad is young and starting to come into their own as well. Coach Drew (Livingston) has done a fantastic job developing them and we’re excited about the level of contribution we will see from team in the upcoming championship season. The men are also rapidly improving with Jake (Greenberg) and Walker (Creedon) leading the way. Walker is a prime time platform diver and he delivered today with a big win. I’m excited to watch them continue to excel.”

The Cavaliers will return to action on Jan. 18 to face Virginia Tech in a dual meet at the Christiansburg Aquatic Center in Christiansburg, Va.

KNOXVILLE, Tenn. – The Tennessee diving team closed out the Tennessee Diving Invitational Sunday on a high note as UT saw two divers finish in the top 10 in the men’s and women’s platform dive competition.

On the men’s side, the Vols had two divers in competition on platform in junior Keegan Richardson and freshman Nick McCann. Richardson had a strong showing as he finished sixth in the event with a score of 287.95. McCann placed 20th overall as he secured a final total of 210.00 points.

“Keegan had three really decent dives,” diving coach Dave Parrington said. “There are some things to correct and he can pick up 60 points which puts him right in the thick of it at the top. Nick continues to develop but he’s got to be more aggressive and relax. Overall, today was a solid day with some mistakes that need to be cleaned up.”

For the Lady Vols, freshman Kara Holt continued to raise her game each day and carried her momentum from Friday and Saturday into the platform competition. Holt finished seventh with a final score of 229.70, but continues to show improvement each time out.

“Kara had four really solid dives and continued on her consistency from yesterday,” Parrington said. “Four out of her five dives were really solid, I saw some fatigue in there, her entries could have been cleaner and that comes from the fatigue. It’s just where we are in our training right now, we just came back this week and we’ve gone six days straight. They’ll be ready for a day off tomorrow, get some rest and come back fresh for an increased level of training going down the stretch.”

Junior Ana Celaya Hernandez came in 12th for UT with a score of 214.55 while freshmen Elle Renner and Emily Ann Wolfson placed 21st and 29th, respectively. Renner scored 192.50 on platform with Wolfson scoring 171.85.

“The others were really solid as well,” Parrington said. “Ana was very consistent, Elle made some good changes and Emily Ann is coming along nicely. We’ve got to get all of their degree of difficulty up and that’s what will happen between now and championship season.”

The divers will return to competition on January 25 when the Tennessee swimming and diving team visits Athens, Ga., for a dual meet against the Georgia Bulldogs.