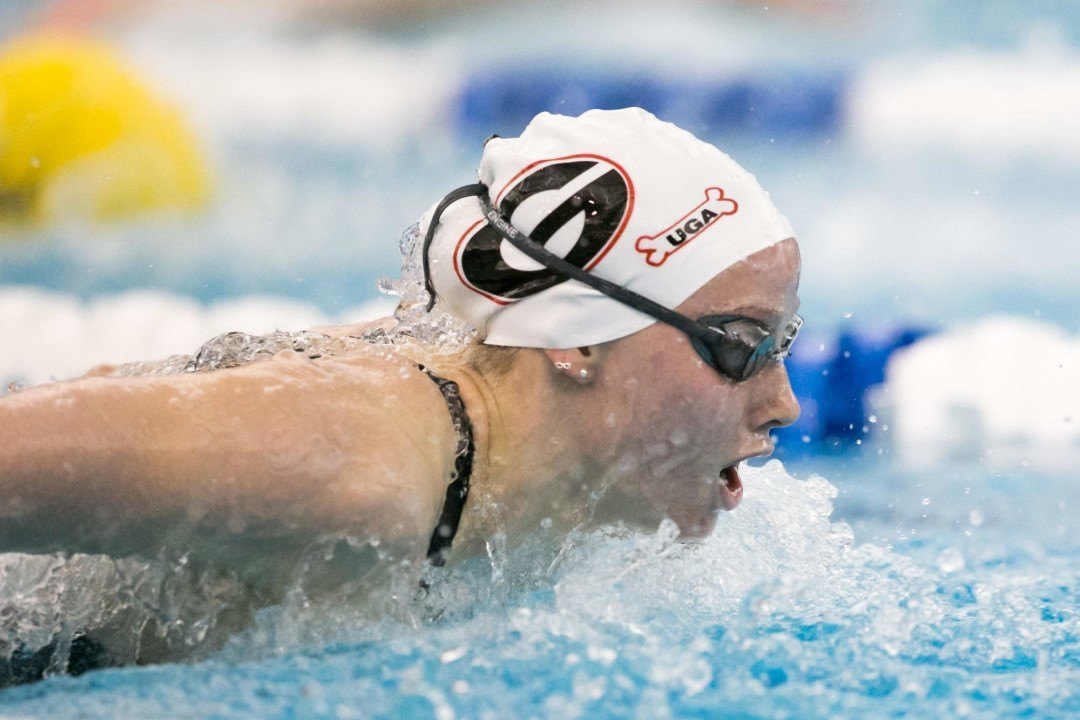 I’ve been a loyal University of Georgia swim fan for more than a decade, and I’m beginning to notice a trend from Bauerle’s Bulldogs: one-trick ponies are put out to pasture. Archive photo via Tim Binning/TheSwimPictures.com

The University of Georgia men’s and women’s swim team had a letdown a few weeks ago at the 2016 Southeastern Conference Championships with both teams barely making the podium in third place. The big headline is that the women’s team was gunning for its seventh straight SEC title, and appeared to be the favorite for the NCAA title as well. Despite this disappointment, there is a more subtle storyline developing in Athens, Georgia. I’ve been a loyal University of Georgia swim fan for more than a decade, and I’m beginning to notice a trend from Bauerle’s Bulldogs: one-trick ponies are put out to pasture.

I first noticed it on the women’s team with Melanie Margalis. As a collegiate swimmer, she was freakishly dangerous at every stroke, and could race to a win in either the 100 or 200 distance. The range of events Baurle entered her in throughout her senior dual meet season (2013-2014) was almost laughable. I wondered if they drew her event entries out of a hat. At the second meet of the season, in October 2014 against Wisconsin, she won the 500 Free in 4:46.47 (ahead of Olympian Shannon Vreeland). At that same meet she also won the 200 Breast by more than five seconds, before finishing second in the 100 Fly to sprinter extraordinaire Ivy Martin. Margalis lost by less than three tenths, clocking an in-season time of 54.93 in an off event. In addition to swimming the 500 Free, 200 Breast, and 100 Fly, she also swam in the 200 Medley Relay, 400 Medley Relay, and 800 Free Relay. Oh yeah, she also had the fastest 100 Free lead-off swim in the 400 Free Relay with a 49.98 (only Ivy Martin, who benefited from the relay start, had a faster split at 49.64).

The 2013 Wisconsin meet was no fluke. During that same season against Emory she won the 50 Free (beating Vreeland by almost four tenths) and the 200 Fly in 1:58.84 (almost seven seconds ahead of All-American Amber McDermott—an underrated Swiss Army Knife swimmer in her own right— who finished second). Against Texas, she was the Bulldogs’ top finisher in the 200 Back, finishing second to Tasija Karosas by two tenths, 1:55.84 to 1:56.06. Margalis won the 100 Breast and 200 IM at that meet. To be a Breakstroke / I.M. specialist is not unusual. However, to also be able to competitively swim the 50 to 500 Free, in addition to every stroke in both the 100 and 200 distances, is HIGHLY unusual. The only event I don’t think Margalis swam during the 2013-2014 season was the 1650 Free.

As Margalis’s graduation date approached, I was dreading the prospect of having to fill her shoes. Enter Hali Flickinger, who apparently was taking notes while training with Margalis. Again, the hardest part about coaching Flickinger must be choosing her events because the possible combinations are endless. She’s a phenomenal IMer and 200 butterflyer. But wait, she’s also a phenomenal middle distance freestyler and 200 backstroker. At last week’s SEC Champs, her leadoff time in the 800 Free Relay would have won her the gold in the individual 200 Free over teammate Brittany MacLean by almost half a second. Flickinger finished second to MacLean in the 500 Free by less than a second, 4:33.01 to 4:33.90. Notably, MacLean is the former NCAA Champion and record holder in that event, while Flickinger had not emerged as a middle-distance freestyle force until very recently. Flickinger didn’t even swim the 200 or 400 IMs at this year’s SEC Champs, which is odd since she finished first in the 400 IM (4:03.42) at the same meet in 2015. Her swim from last year was almost two full seconds ahead of this year’s winner, Sydney Pickrem (4:05.32). Of course it’s speculation, but based on how much time she’s dropped this year across the board in her events, I think Flickinger would have won both IM titles at this year’s SECs, in addition to the 200 Free. Nevertheless, it seems like the fate of the Swiss Army Knife swimmer is to be “under-decorated” because he or she is entered where needed to score points, not necessarily where he or she is most likely to win titles.

Although Flickinger “only” came away with one individual SEC title at this year’s SECs, the sheer breadth of Flickinger’s event lineup over the five-day meet was jaw-dropping:

Now that Flickinger is a senior, the Georgia women will need a new Swiss Army Knife to fill the gaps in relays and weak events, just like Margalis and Flickinger have in the past. My prediction, although it admittedly lacks creativity, is Kylie Stewart. I say uncreative because Stewart stepped on campus in Athens, Georgia as a Swiss Army Knife swimmer. As a high schooler, she had already clocked 22.80, 48.98, 1:44.66, 4:42.75, and 9:43.60 in the 50 through 1000 Freestyle. She also had best times of 1:56.30 in the 200 Butterfly, 1:58.04 in the 200 I.M., 4:09.15 in the 400 I.M., and a stunning 1:49.85 in her signature event, the 200 Backstroke. In her sophomore year at Georgia, she was missing from the 800 Free Relay in order to swim butterfly in the 200 and 400 Medley Relays (she also swam the 200 Free and 400 Free Relays). Speaking of butterfly, despite that stroke being her third best as an incoming freshman, she has dropped from a 54.0 to a 51.85 in the 100 Butterfly. She has also shaved nearly half a second off of her 100 Backstroke. Notably, with Veronica Burchill coming in to swim butterfly, and with the departure of MacLean and Flickinger as dependable middle-distance freestylers, I’m interested to see how Bauerle will utilize Stewart in her final two years. (Meaghan Raab has developed quicker, and also presents a lot of options in the lineup.)

Although I first noticed it on the women’s team, there is clearly an argument to be made that Georgia’s men’s team also wields multiple Swiss Army Knife swimmers: Chase Kalisz, Tynan Stewart, and Gunnar Bentz are no-brainers. Even Nic Fink. I’m sure Fink was originally recruited as a breastroker (and a stellar one he turned out to be), but he also swam I.M., sprint free, and even stretched to middle-distance free. At the 2012 SEC Championships, as a freshman, Fink went 1:35.27 for the fastest 200 Free split on the Bulldogs’ 800 Free Relay, which placed third.

I’ve heard the word “depth” thrown around when describing Georgia’s swim team, but I don’t think that word paints the full picture. Yes, Georgia often places numerous swimmers into the A Final of NCAA events (breastroke aside), particularly in the more grueling events (i.e., 200 Butterfly and 400 I.M.). But I argue that Georgia’s success has more to do with the “versatility” of individual swimmers than it does just depth in particular events. As of late, we have witnessed the country’s top recruits choosing the West Coast (Cal and Stanford), Texas, and Florida over Georgia. Nevertheless, the Georgia Bulldogs have continued to win with less talent on paper. In a recent interview, MacLean attributed the success to “toughness,” but perhaps Bauerle’s proficiency with the Swiss Army Knife swimmer plays a key role. Exceedingly few Bulldogs swim only one event or one distance. Instead, athletes are expected to be maleable (perhaps sacrificing their best individual events) to maximize team points.

In comparison to another sport, the Georgia Bulldogs are the Oakland Athletics of NCAA Swimming. Think the movie Moneyball. Blockbuster homerun hitters are benched in place of those who consistently get on base.

Eli Noblitt is a retired swimmer and coach from Atlanta, Georgia, who now reminisces through swim blogs and meet results. He attended the University of Georgia, which explains his bias towards the Bulldogs, before attending law school at Emory. He is now a practicing attorney, but would prefer to be on the pool deck.

We’ll see if they’re able to keep it up, one tick ponies are starting to become the norm out of these last two recruiting classes, hopefully they’ll be able to get some stud recruits in the next couple years to build back up. First time in a while that the men have more swimmers qualified than women