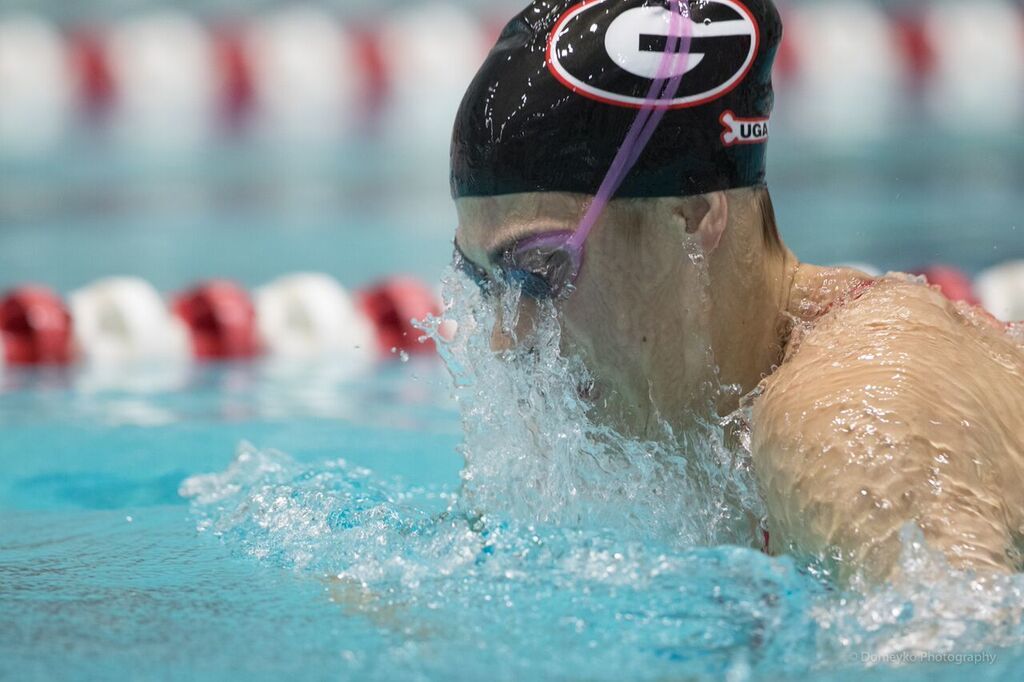 Ten additional swimmers have signed national letters of intent with the Georgia program, according to an announcement Monday by Tom Cousins Swimming and Diving Head Coach Jack Bauerle. Current photo via “Rafael/Domeyko Photography”

Ten additional swimmers have signed national letters of intent with the Georgia program, according to an announcement Monday by Tom Cousins Swimming and Diving Head Coach Jack Bauerle.
There are two signees from Georgia (Bradley Dunham II and Keegan Walsh), North Carolina (Olivia Carter and Maddie Homovich), and Virginia (Callie Dickinson and Luke Durocher); one from California (Eva Merrell), Ohio (Portia Brown), and Tennessee (Caleb Harrington); and one from New Zealand (Gabi Fa’amausili).
The signings of Andrew Abruzzo of Pennsylvania, Dakota Luther of Texas, and Tatum Smith of Georgia were announced last week.
Brown is a native of Broadview Heights, Ohio. She attends The Hawken School and swims for the Lake Erie Silver Dolphins with coaches Jerry Holtrey and Roderick Speed. Brown is a two-time Ohio State finalist in the 200 individual medley and the 200 freestyle. She is an NISCA All-American and a USA Swimming Scholastic All-American.
Carter is from Jamestown, N.C. She swims for Enfinity Aquatic Club under coaches Tim Hillen and Korey McCulley. Carter is the No. 8-ranked 18-and-under swimmer in the world in the 200 butterfly. She was the Junior National East Champion in the 200 butterfly and the runner-up in the 100 butterfly. Carter qualified for the Olympic Trials in both butterfly events. A homeschooled student, she earned USA Swimming Scholastic All-America honors.
Dickinson attends Norfolk Academy and competes for Coach Jack Roach at TIDE Swimming in Virginia Beach, Va. She was a semifinalist in the 200 backstroke at the Olympic Trials. Dickinson was a four-time finalist at the 2016 Summer Junior National Championships, including a second-place showing in the 200 backstroke and a third-place effort in the 200 butterfly. She was a Junior Nationals finalist in the 200 backstroke. Carter has earned USA Swimming Scholastic All-America recognition.
Dunham is a native of Hoschton, Ga. He attends Dacula High School and competes for Coach Chris Davis at SwimAtlanta. Dunham won the state championship in the 500 freestyle last year and is a three-time finalist at the state meet. He was a Junior National East finalist with a sixth-place finish in the 1,650 freestyle.
Durocher attends Riverbend High School and competes for Nation’s Capital Swim Team under Coach Jeremy Linn in Fredericksburg, Va. He competed in the 2017 USA World Championship Trials and is the No. 6-ranked 16-and-17-year-old in the country in the 200 butterfly. Durocher was the NSCA Summer Championships runner-up in the 200 butterfly and he was a three-time finalist in the Junior National Championships, including medals in the 200 individual medley and the 200 butterfly. Durocher is a four-time finalist at the Virginia High School League Championships.
Fa’amausili attends Avondale College and competes for United Swimming Club under Coach Igor Poliansky in Auckland, New Zealand. She is a two-time FINA World Junior Champion in the 50 backstroke and a four-time New Zealand Short Course champion. Fa’amausili holds the New Zealand record in the 50 backstroke. She will be joining the Lady Bulldogs in January.
Harrington attends Bearden High School and competes for Tennessee Aquatics under Coach Larry Hough in Knoxville, Tenn. Harrington is a four-time Tennessee state champion, winning the 100 butterfly twice and the 50 and 100 freestyle once each. He was a Speedo East Junior Nationals finalist in the 200 butterfly and competed at the 2017 U.S. Open Championships. Harrington has been chosen as an All-American by USA Swimming and NISCA, and he is a USA Swimming Scholastic All-American. He is the younger brother of Lauren Harrington, a 13-time All-American who helped Georgia win national titles in 2013 and 2014.
Homovich hails from Pittsboro, N.C. She attends Woods Charter School and swims for Coach Paul Silver and the Marlins of Raleigh. Homovich is a two-time Junior National East champion in the 1,650 freestyle and was the National runner-up in the 400, 800, and 1,500 freestyle. She is a member of the USA National Junior Team, representing Team USA at the Junior Pan Pacific Championships. Homovich is ranked No. 23 in the world in the 400 individual medley for 18-and-unders, and she is in the top 10 for 16-and-17-year-olds in the United States in nine events. She is ranked as the No. 5 recruit in the country by CollegeSwimming.com.
Merrell is a native of Newport Beach, Calif., where she attends Crean Lutheran High School and competes for coaches Todd Hickman and Brian Pajer for Aquazot Swim Club. Merrell is a member of the U.S. National and U.S. Junior National Teams, representing Team USA at the Junior Pan Pacific Championships and FINA World Cup competitions. She won the 200 backstroke at the Big Ten vs. USA College Challenge. She is ranked 11th in the world for 18-and-unders in the 200 backstroke. Merrell was chosen as the nation’s No. 1 prospect by SwimSwam and she is a two-time USA Swimming Scholastic All-American.
Walsh, a native of Lawrenceville, Ga., attends Brookwood High School and competes for Davis at SwimAtlanta. Walsh has helped Brookwood win back-to-back state championships and he was a state finalist in the 100 backstroke. He was a U.S. Open qualifier in the 100 and 200 backstroke, and he is the No. 23-ranked 200 backstroker among 16-and-17-year-olds.
“We have stockpiled some remarkable athletic and academic talent with this group,” Bauerle said. “We are very excited to have them signed on. They have had exceptional performances in the pool and in the classroom, and they will be tremendous additions to our teams. We know that they are capable of great things in and out of the water.”