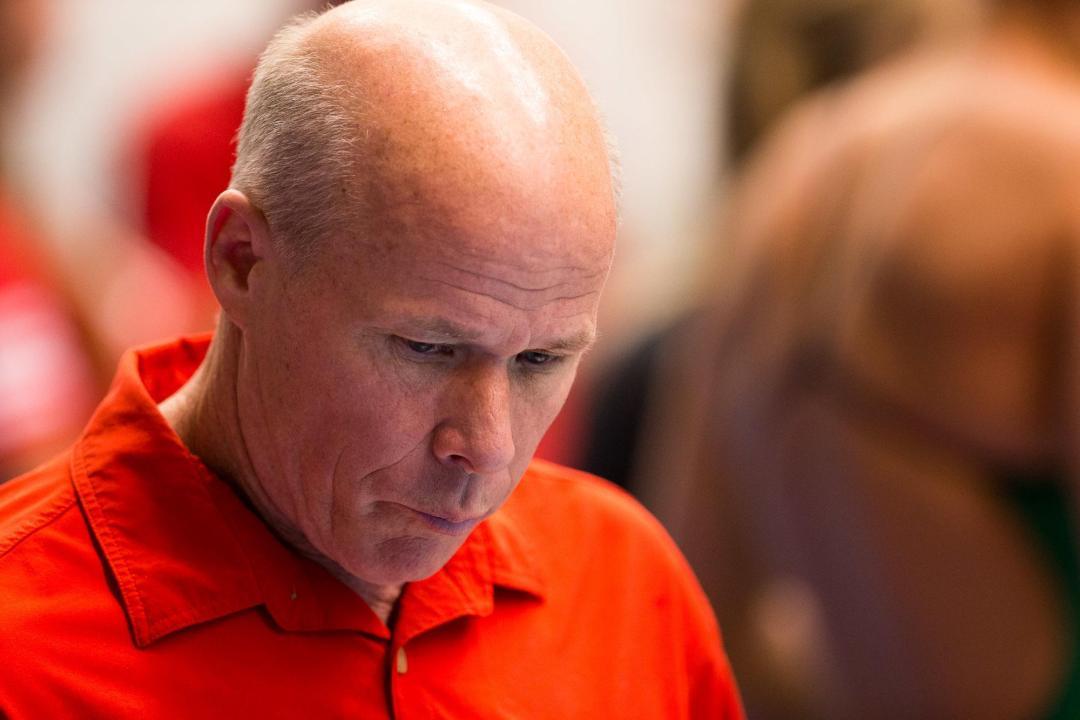 The Georgia Bulldogs brought their A game to Columbia, SC, for a dual meet against SEC opponents South Carolina in both teams’ first competition of the new year. Meet results can be found here. The defending national champion Georgia women won 151-103 and the Georgia men closed out the meet 150-103.

Correction: a previous version of this story reported this as the first meet back for previously-suspended head coach Jack Bauerle. Though Bauerle was eligible to coach at this meet, he did not make the trip to South Carolina as he is still recovering from a shoulder surgery.

The two-time defending champs Georgia dominated this meet right off the bat. They kicked off the competition with a 1-2-3 sweep of the 200 medley relay, their A team of Olivia Smoliga, Annie Zhu, Lauren Harrington, and Chantal Van Landeghem taking the victory (1:43.35) by a little more than a second over the Bulldog B team.

The Bulldogs would not lose a single swimming event throughout the entire meet, despite missing sprinter Maddie Locus and defending 500 and 1650 free NCAA Champ Brittany Maclean from their lineup. The next winner for Georgia was Amber McDermott in the 1000 (9:57.55), followed by a 1-2-3 finish in the 200 free. Three Bulldogs bunched up for the tight finish, but it was sophomore Anna Kolanowski who finished on top in 1:50.89. Senior Jordan Mattern touched 2nd in 1:50.92, followed by freshman Kylie Stewart in 1:50.95.

Junior Hali Flickinger had a great meet, posting the fastest times in all three of her individual events. She was 54.31 to win the 100 back, 4:47.44 to win the 500 free, and 2:00.83 in the 200 IM, which would have won were it not swum in exhibition. After the 500 free, the Bulldogs had tallied enough points for a win, allowing for them to swim exhibition for the rest of the meet.

Van Landeghem played an elevated role in the sprint free events with the absence of Locus and locked it down for the Georgia sprint group. She won the 50 and 100 free in respective times of 23.65 and 51.16, as well as swam on both of Georgia’s A relays. On the 400 free relay, however, it was Smoliga who split the fastest time in the field (50.89).

Just like their female counterparts, the Bulldog men did not lose one race (we’re going to disregard exhibition races) in their rampage of South Carolina. They kicked off their meet with a win in the medley relay after seeing their women go 1-2-3 over the Gamecocks in the women’s medley relay. The team of Taylor Dale, Nic Fink, Ty Stewart, and Michael Trice prevailed 1:30.78 to 1:31.23 over South Carolina.

Bulldog junior Matias Koski won the 1000 by almost five seconds over Kevin Litherland, finishing in 9:07.10 to Litherland’s 9:12.02. Koski, who is no stranger to sprint freestyle, turned around after the 1000 to take the 50 and 100 free. Yeah. The distance star was 44.85 in the 100 and was not very far off from breaking 20 seconds in the 50 (20.25). Georgia, who has had some issues putting together an elite sprint free group, is certainly benefitting from Koski, who will be a huge part of their relays come SECs and NCAAs.

Reigning 400 IM champ Chase Kalisz, who also happens to hold the American Record in the yards version of that event, swam some off events of his own. He posted a 55.70 in the 100 breast, just getting touched out by Fink, who won it in 55.28. Many of us know that Kalisz can swim a monster 200 or 400 IM… or a monster 200 fly… or a monster 200 breast… even a monster 200 back. But we tend to forget that he has a very powerful freestyle. Kalisz flexed his freestyle muscles as he put up the top time in the 500 free. He beat out freshman distance swimmer Kevin Litherland (4:24.87) to win the event in a very impressive 4:24.27 for someone who isn’t seen as primarily a 500 freestyler.

Georgia’s divers are competing at the Tennessee Diving Invitational currently. Both men and women’s swimming and diving squads will be tested next weekend as they host the fifth ranked women and top ranked men of Texas.

i think the author forgot the team they swim next week…that is Texas!