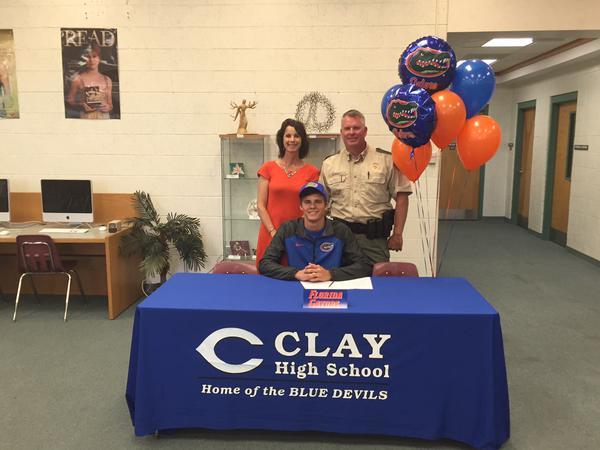 Grady Heath with his parents, Mike Heath and Sherri Lee Heath, at his NLI signing to University of Florida. Current photo via Jason Calanog on Twitter

Grady Heath, a senior at Clay High School in Green Cove Springs, Florida, has signed an NLI to swim for University of Florida beginning in the fall of 2015. Heath’s club team is Bolles School Sharks, making him the second Clay-Bolles sprinter in a row to head to Gainesville. Heath will be following in the footsteps of Caeleb Dressel, the 2015 SEC Freshman of the Year, who was also a Clay-Bolles sprinter.

Heath placed fifth in the 200 free and third in the 100 free at the 2014 FHSAA Class 2A Championships in November. His best times are:

He’s also following in the footsteps of his father, Gator great and four-time 1984 Olympic medalist and member of the famed “Grossbusters” 800 free relay, Mike Heath. He is the spitting image of his father at that age. His mother also swam at Florida.

It’ll be interesting to see how he develops; he has kind of an identical story to Clark Smith where one parent was a 1984 Olympian and an individual NCAA champion and met the other parent while on the college swim team together.

Who is Clark Smith’s Olympian parent? Great to see the generations of swimming!

Clark Smith’s mother is Tori Trees if I remember correctly