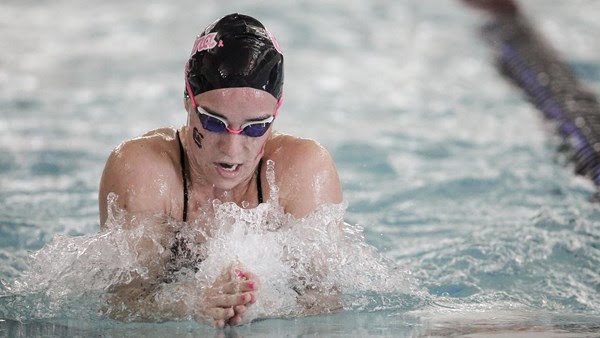 South Carolina swimming and diving will pack its bags for its first road trip of the season as it travels to Kentucky for a tri-meet. Current photo via South Carolina Athletics

COLUMBIA, S.C.- South Carolina swimming and diving will pack its bags for its first road trip of the season as it travels to Kentucky for a tri-meet. The Gamecock men will take on Kentucky while the women will face both Kentucky and Ohio University on Friday at 4 p.m.

The Gamecocks will return to the standard college short course yards format after swimming their first meet in long course meters against Tennessee.

GAMECOCK NOTABLES
-Freshman Taylor Steele took home the first victory of her Gamecock career in the 100m breaststroke. Steele, who finished with a time of 1:31.21, outpaced the entire field by over a second.
– Senior Emily Cornell continued her dominance in the backstroke at South Carolina, winning the 100m event with a time of 1:03.65. Cornell is the current program record holder in both the 100 and 200.
– Senior Lionel Khoo took home the final individual victory for the Gamecocks in the 200m IM. Khoo’s time of 2:11.52 beat the field by nearly two seconds.
-Diving saw three of its members reach the NCAA Zone Qualifying standards. Junior Yu Qian Goh qualified for the one-meter while both junior Grant Summers and freshman Mathilda Roxne qualified for both the one-meter and three-meter events. Roxne placed second in the three-meter competition with a score of 312.98.

SCOUTING THE WILDCATS
-Kentucky hosted Indiana and Notre Dame for a tri-meet last week and went 3-1, sweeping the Fighting Irish and knocking off Indiana on the women’s side.
-Both the Wildcat men and women notched top-25 finishes at NCAA’s last season, with the women finishing 15 and the men 25.

SCOUTING THE BOBCATS
-The Gamecocks have only faced Ohio once in program history, knocking off the Bobcats in 1993, 152-91.
-The trip to Lexington will be the first meet of the season for Ohio.

QUOTEABLE: HEAD SWIMMING COACH MCGEE MOODY
“One of the interesting things about our fall schedule this year is just about every team that we face, men and women, if they’re not in the top 25, they’re very, very close. And so, we’re facing two more great teams this week. Kentucky’s women just knocked off No. 7, Indiana. Kentucky’s men are probably faster than any Kentucky roster I’ve seen in the past probably 8-10 years. So, we’re going in, obviously, with good SEC competition.”

QUOTEABLE: HEAD DIVING COACH TODD SHERRITT
“This is the first away meet so I’m looking forward to see how we dive on the road. Kentucky has a formidable team so I know it will be great competition. It’s still early in the season, but every meet we go to is a stepping stone to the conference championships.”

Live results can be found at http://sidearmstats.com/ukentucky/swimming/index.htm.