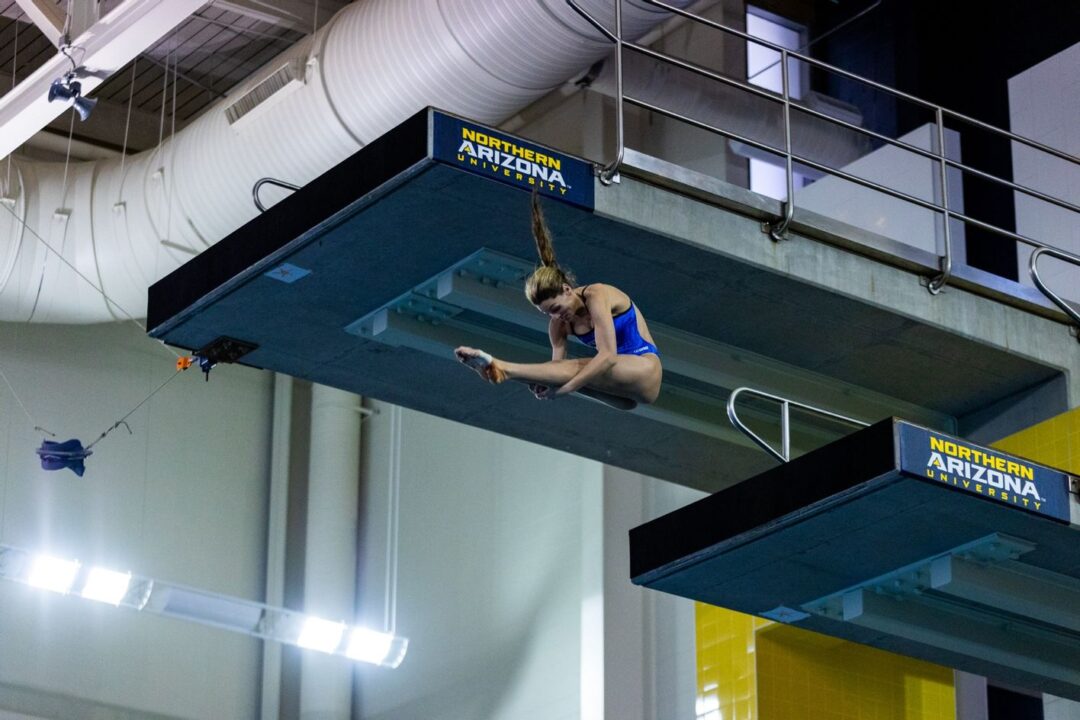 Northern Arizona went 1-2 in the women's team event on the final day of the 2022 Lumberjack Diving Invite in Flagstaff. Current photo via Peyton Bartsch

FLAGSTAFF, Ariz. (November 20, 2022) — Closing out the first Lumberjack Diving Invite of the season, the Jacks compete on platforms and ended the meet with a newly implemented relay event, which is expected to be seen in more conference championships and at NCAA’s.

“We did really well in platforms, we had everyone that competed in scoring position. Mackenna Stocker did some really great things, Makenna Sammons was probably the diver of the week, she had the most consistently through all three days but everyone did some great things,” Head Diving Coach Nikki Kelsey said.

NAU had five divers finish the platform dives in the top ten, out of 25 total competing in the event today. Making yet another top three finish was true freshman Mackenna Stocker who placed third with a score of 211.20. Makenna Sammons followed for fourth place with 209.45, and Grace Wesche in fifth place, scoring 207.05.

Reaney Preston also had a good day on platforms, finishing eight overall with a score of 190.90, closely trailed by Margaret Wesche in ninth place with 190.75.

For the first time in competition the Jacks went one-two-three in the relay event. The relay event includes all boards and platforms, with teams being made up of three athletes each, and are scored collectively as a trio.

Preston, Kendall Marquez, and Maegan Jensen championed the event with a score of 263.70, followed by NAU trio Emily Luberto, Stocker, and Margaret Wesche who finished with a score of 241.30. In third place, also NAU’s last trio competing in the event, was Makenna Sammons, Victoria Knapp, and Grace Wesche, scoring 239.75.

“The relay event was really fun, it was nice to see everyone pull together and seeing the first three spots go to our teams was very fun,” Kelsey said.

The Lumberjacks will have about a month of training before they head to the UNLV Invite in December.

FLAGSTAFF, Ariz. – Highlighted by first-place finishes by both Silvia Alessio and Grace Ally, the Fresno State divers wrapped up competition at the Lumberjack Diving Invite on Sunday at Northern Arizona.

Alessio took home top honors on the 1 Meter on Saturday with Ally following it up on Sunday with a first-place finish on the Platform.

In addition to Alessio & Ally, Jaden Fagundes also competed for the ‘Dogs on all three boards with a 19th-place finish on the 1 Meter being her top finish.

The weekend wrapped up with the ‘Dogs taking fourth in the team event scoring 230.45 points.

The Bulldog divers are now off until heading to the UCLA Diving Invite on Jan. 13-15 in Los Angeles.