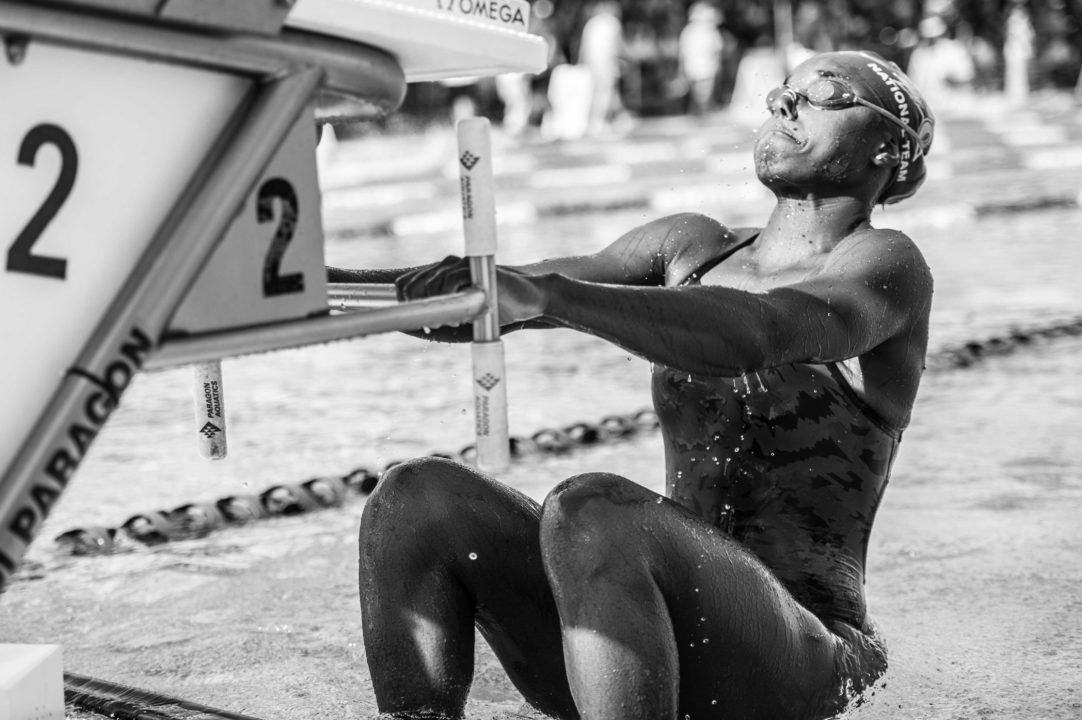 The Stanford Cardinal took on the Oregon State University women at home at the Avery Aquatic Center, winning 13 of 14 events. The underclassmen charge was led by standout 2014 top recruit Simone Manuel‘s set of four wins, helping to take down the Beavers 134 to 117.

Manuel claimed her third win of the night in the 500 Free (4:48.50), out-touching Oregon State’s Harrison by just over four-tenths of a second (4:48.95). Manuel and Harrison’s times were over 30 seconds ahead of the rest of the field. Their times place them in the top eight in the country in the event.

“She’s incredibly talented,” Stanford Head Coach Greg Meehan said in a statement to Stanford Athletics about Freshman Simone Manuel. “What you see there in the meets is what we see every day in training. She’s very consistent.”

There are no Bear detractors, SwimNerd. That’s the thing. It’s just you criticizing Berkley bc you’re intimidated by the talent on the squad.

For some reason I feel like SwimNerd is a Cal guy pretending to be a Stanford guy to make Stanford fans seem annoying toward Cal. SwimNerd is just staying the facts tho – Stanford better than Cal right now

SWAM your right. I must be a shameless Cal fan tryin to bash all those Card fans!

This is yet one more example of the unsportsmanlike conduct of the Cal bandwagon.

Facts are facts like what you said. Stanford is swimming better than Cal or anyone else right now!

swimnerd – I don’t really follow women’s NCAA swimming that closely, but I do follow the men. Since they’re not that different, I went ahead and spent a few minutes running some very unscientific numbers for this year’s women’s meet, based on my own algorithm, which I use for the men’s meet, and which is the only model I have found, or created, which consistently outperforms my ability to score up/downs by feel. For returning swimmers, what I call the near-upper-limit scoring potential( = 2σ of mean projected result for each individual, based on my predictive model…aka there is only a 2.1% chance that each individual will outperform the final placing granted to them within my algorithm, in this defined… Read more »

Hey I respect you’ve developed an algorithm which’s worked for the men.

But you yourself admitted these’re v unscientific numbers, no?

You also anwered the question when you conceded the Card’s freshman class’s way superior to Cal or Georgia’s!

There’s not been that amazing a gap between the numero uno class (Card) and the runner ups in ages! That’s what tilts the balance so strongly in Nerd Nation’s favor, and it’ll widen further with next year’s recruits.

Simone Manuel, Janet Hu and the gang are really that stompin good 🙂

Very unscientific. Opposite of science. Statistics.

As to the rest of your argument…..Oh…It…I…have no response. It was perfect.