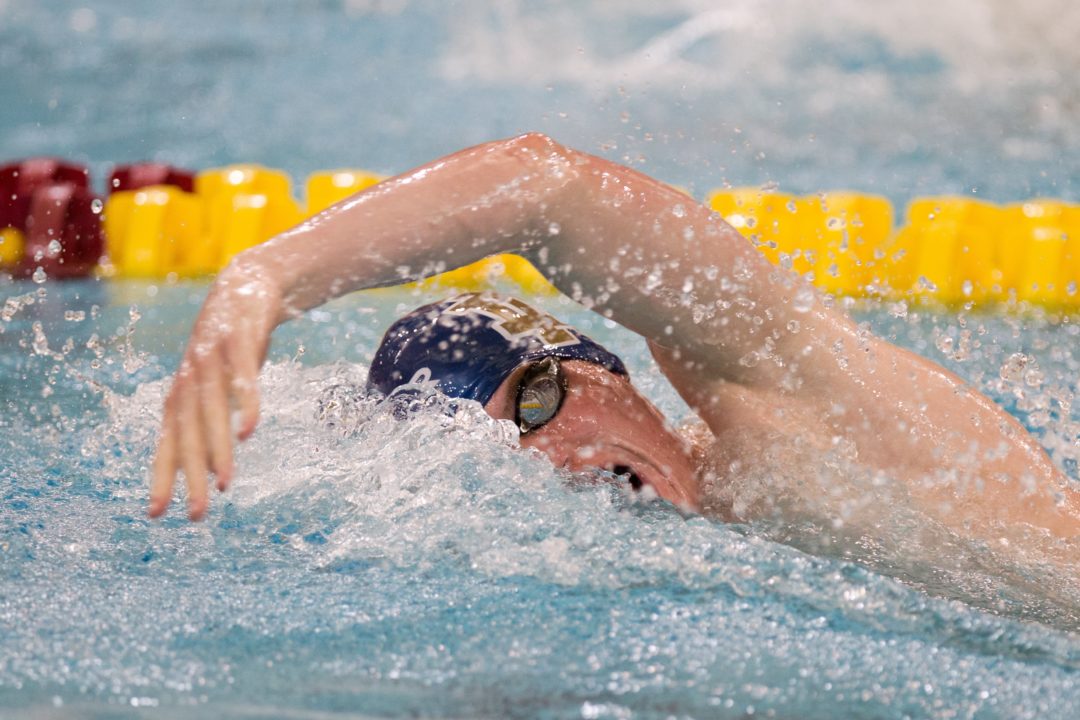 Frank Dyer of the Notre Dame Fighting Irish broke the school record in the 1000 free on Saturday, despite being a race he doesn't train all that often. Archive photo via Tim Binning/TheSwimPictures.com

The Notre Dame Fighting Irish hosted  Cleveland State on Saturday night in a dual meet as both teams closed their regular season in South Bend, Indiana. The two have a friendly regional relationship, with a lot of respect between the coaching staffs, making it thus a fitting opponent for the final meet of Notre Dame men’s head coach Tim Welsh before he rides off into the sunset.

No one has been as vocal in celebration of his coach’s accomplishments across their social media platforms this week as has senior Frank Dyer, who also celebrated his swan song at Rolfs on Saturday, and with good reason. Welsh and Dyer have rewritten the Notre Dame Fighting Irish record books in the last four years.

Before competition was done on Saturday, though, he’d mark his name onto one more record, swimming only two races on the day to make sure he had plenty of energy for the swim. Dyer in the meet’s first men’s individual event, was a 9:11.93 in the 1000 yard free, which breaks the old school record of 9:13.41, set by James McEldrew in 2012, by well over a second. That’s only the third time in his career that he’s swum the race, and he’d hovered in the 9:20’s the rest of those swims.

That will be a big confidence boost, even in an event he won’t swim at the conference or NCAA level, for Dyer going toward the ACC Championships. He split 4:34-4:37 in the race, meaning that he’s done more than enough “work” and a nice little shave and taper should bring his speed for an outstanding 200 and 500 free.

Other good swims for Notre Dame’s men’s squad included Zach Stephens, who is a sprint freestyler/breaststroker, and won the 50 in 20.80 ahead of Cleveland State’s Alex Lewis. Cameron Miller won the 100 breaststroke in 55.98, running away from the field.

Not to be left out of the excitement, it was senior day for the Notre Dame women as well, and their star senior Kelly Ryan ended her dual meet career with an individual win in the 100 back. She swam a 57.12 to beat a 57.47 from teammate Courtney Whyte.

Picking up a pair of individual wins for the Notre Dame women was junior Emma Reaney. She took the 100 free in 51.93 and the 200 fly in 2:01.17. Neither event is a primary for her, but both are quality performances for her in off events.