Four Years Later: The Swimming Landscape from London to Rio, Part One 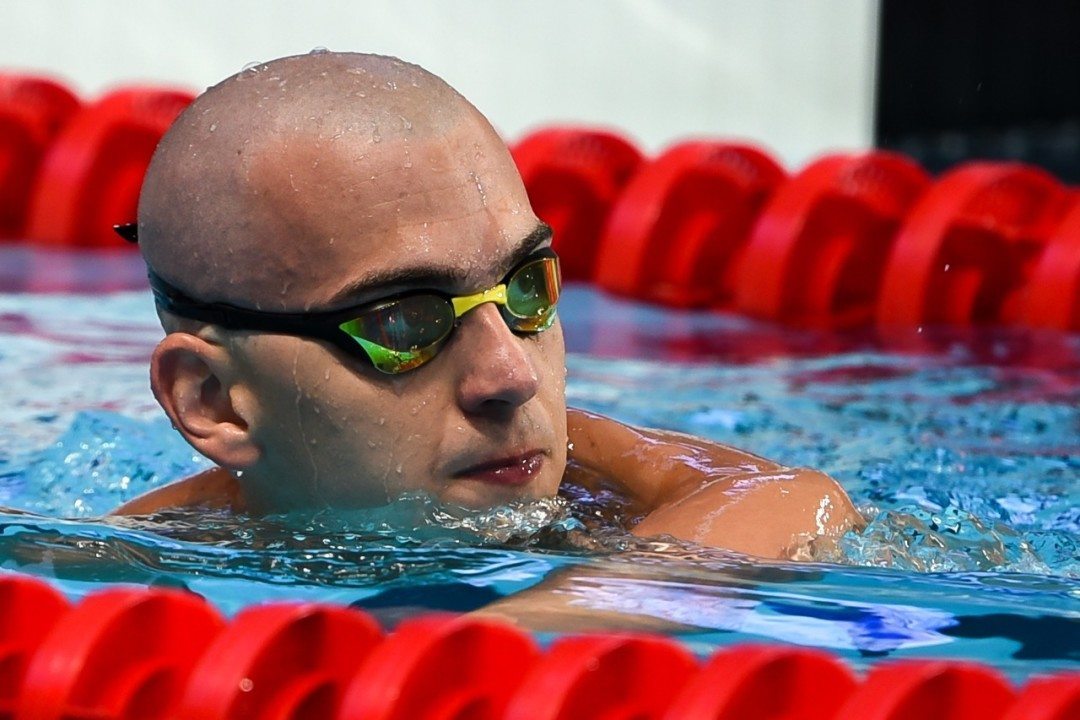 Can Laszlo Cseh have a breakthrough at 30 years old? Archive photo via Peter Sukenik/www.petersukenik.com

The team of Jana Pavalic, Lucijana Lusick, Matea Ivekovic, and Mia Hren posted a time of 3:49.56 to set a new Croatian Record in the women’s 4×100 free relay.

17-year-old Roos Vanotterdijk set a new Belgian National Record in the women’s 50 backstroke, posting a time of 28.50 in the semi-finals of the event.

Moluh took 0.07 off Daria Vaskina’s championship record in the girls’ 50 back, and is the heavy favorite to take gold headed into the finals.

The greatest virtue of the four-year Olympic cycle is how it works the sport of swimming down to a concentrated size. Every Olympics is a snapshot of what each little mini-era of swimming was all about. With Rio fast approaching, we wanted to take a look back at 2012. What did the future look like after London as it compares to what actually happened.

In the first part of “Four Years Later”, we’re going to take a look at which men were flying high coming into 2012, and who sits on top heading into 2016. What swimmers looked like they were destined for victory in London but came up short. Who “came out of nowhere” and stepped up to the big London moment? Who met expectations.

For reference, I’m going to compare the 2011 World Championship top three to the 2012 Olympic results. I’ll also talk about the 2015 Kazan results and what they suggest or don’t suggest will happen in Rio:

Cesar Cielo looked like a heavy favorite to win back to back 50 freestyles at the Olympics. Cielo absolutely dominated in Shanghai, winning by a margin of .38 seconds. Olympic champion Florent Manadou was a good but not great French sprinter who didn’t even make the team in the 50 in Shanghai behind veterans Alain Bernard and Frederick Bousquet. In fact, he was somewhat the goat of French swimming: on the country’s prelims medley relay, his 54.0 butterfly split was the second-slowest of the entire field and the primary contributor to France failing to final in that race.

Manadou improved his personal best in the 50 freestyle by an entire second in six months to become an Olympic champion.

Now Manadou is the overwhelming favorite in the 50 free, and Mehdy Metella’s impressive fly split from Kazan has made French fans forget (by choice or nature) that Manaudou was ever their primary butterflier. He won this past summer in Kazan in nearly as dominating fashion as Cielo in 2011. Is he safe? It’s hard to believe we will see someone have the kind of crazy improvement that Manadou had in 2012. But could someone like Caeleb Dressel, making his first big time international team, be the one to upset the French giant?

Germany was poised to have it’s best Olympic male performance since the 1980s. Paul Biedermann was back in great form, winning medals in the 200 and 400 freestyle. Christian Vom Lehn was an ascendant talent in the 200 breaststroke. Even older athletes like Helge Meeuw and Henrik Feldwehr were showing they still had something left in the tank.

But it was not to be. Germany fell flat on it’s face at the 2012 Olympics. The only medal came in open water by Thomas Lurz. Biedermann cratered- failing to even make the 400 freestyle final. He and Feldwehr performed so poorly that Germany did not use either on their medley relay. Had they repeated their Shanghai splits they would have been in medal contention.

Australia seems to be the country on the comeback trail this time around. Despite a tumultuous Olympic cycle, they returned to their rightful #2 spot in Kazan after finishing a dreadful 7th in the London medal count.

Their biggest stars, however, are mostly untested at the Olympics. Only time will tell whether they can withstand the pressure of Rio. Mitch Larkin swam only the 200 in London and ran out of gas in the final. Cameron McEvoy was just eighteen years old at that time. If those two swimmers aren’t on their game, Australia’s will have no chance to repeat their 4×100 medley silver from Kazan.

Kosuke Kitajima, the greatest male breaststroke of all time, looked like he had enough in him for one more Olympic run. Kitajima, the only back to back Olympic champion in men’s breaststroke up to that point, was going for an unprecedented third straight title.

Although he was defeated by Daniel Gyurta over 200m in Shanghai, the margin was tight. Kitajima managed to swim even faster in London, but got overwhelmed by the then rapidly improving Gyurta, the homecrowd hero Michael Jamieson, and his own countrymen Tateishi.

Laszlo Cseh has been a perpetual bridesmaid his entire Olympic career. Despite his wide event set, he’s had the misfortune of sharing a generation with Phelps and Lochte. However, he’s given himself a little hope that finally, at age 30, he could break through in Rio.

Cseh notched personal bests in the 100 butterfly, to go with a non-suited best in the 200. Still, he has the same problem he always has, in this case being that Phelps is still hanging around and le Clos will be there as well, to go along with a host of young swimmers that will push their way into the final.

Check back for Part Two of “Four Years Later” . Where we will perform the same analysis of the women.

The big question as far as olumpic history is concerned is whether MP can emulate the feat of Al Oerter and Carl Lewis by winning either the 100 fly or the 200 IM for the 4th time in a row!

If we apply the Shanghai-London trends to the Kazan-Rio cycle, 4 events would have repeat winners. In which events do you think the Kazan winner will also win in Rio? My guesses are:

Based on that pattern, the US can expect to win about 8 medals on the men’s side. Swimming has become extremely fast everwhere.

Not that there’s any pattern or enough data to create one but where do you get 8 from?

You have to take out the 50 strokes and account for Phelps. The US seems to perform in the ballpark of their last World Championships.

Haha awesome! Thanks for putting this together, Chris.