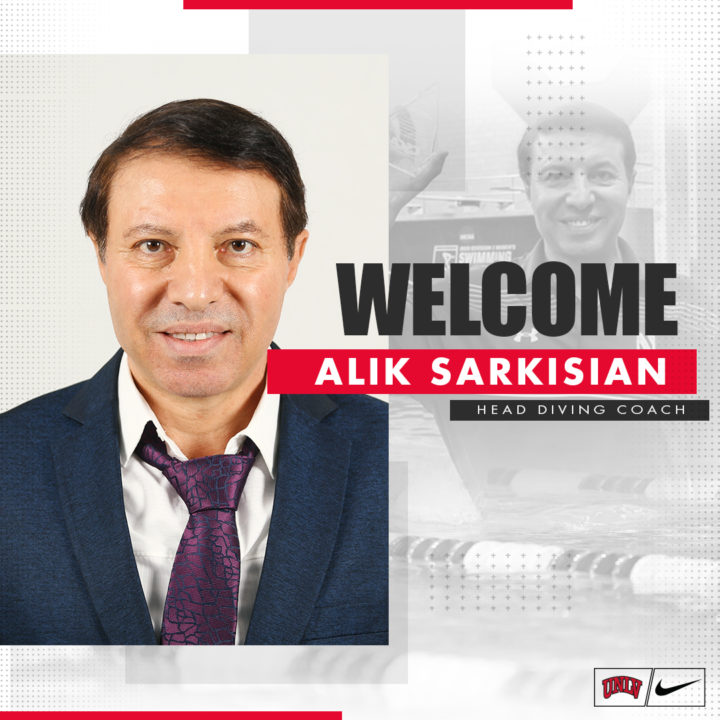 2018 CSCAA Coach of the Year Alik Sarkisian, formerly at Northwestern, has been hired as head diving coach for the UNLV men's and women's programs. Current photo via UNLV Athletics

“I am excited to be here at UNLV, says Sarkisian. “It’s going to take time to adapt to a new place with new weather conditions, especially after living in Chicago. I’m going to be around new coaches, new athletes, and a new facility. But I’m going to learn as quickly as possible and bring success to the team this season.”

Sarkisian spent the last 13 years (2006-19) as head diving coach for Northwestern, where he was named the 2018 Big Ten Diving Coach of the Year and CSCAA Coach of the Year. He was instrumental in the success of two-time national platform diving champion Olivia Rosendahl, Northwestern women’s first-ever Big Ten Diver of the Year (2018).  He implemented an intensive junior developmental diving program in which countless athletes have gone on to final at USA Diving National Championships and qualify for and participate in international competition. During his time at Northwestern and as head coach for Chicago Dive Club, he served as USA head coach for the 2013 and 2018 World University Games, the 2015 Head USA Team Coach at the world series and the 2017 USA Team Coach at the Grand Prix.

“To say we are excited about Coach Sarkisian is an understatement,” said Loorz. “He is one of the top diving coaches in the world, with a proven track record of world class performance. He also has a widely known reputation as a coach who takes care of his student-athletes. His personality is a great fit for UNLV, and I am excited for our divers to begin working with him.”

From 2001-06 Sarkisian spent his time at the USA Regional Training Center where he was the director and head coach. During his time there he sent many divers to Nationals and International Championships. He was also a coach for the FINA/USA Diving Grand Prix, the US Diving National Training Camp, PAN-AM Games, USA National Team, USA Diving Olympic Trials, and the USOC- Developing Young Champions Summit.

A 13-time Armenian national champion, Sarkisian competed internationally for the USSR. He graduated in 1980 with professional level training in sports science and education from the USSR State University of Physical Education in Yerevan, Armenia.

Is it strange that his name is Sarkisian and he will be coaching at UNLV?

Well done my friend!! Good luck and I wish you the best. You will enjoy the dryer warmer weather and you can forget about that painful ice-cold winter wind that shoots off Lake Michigan.