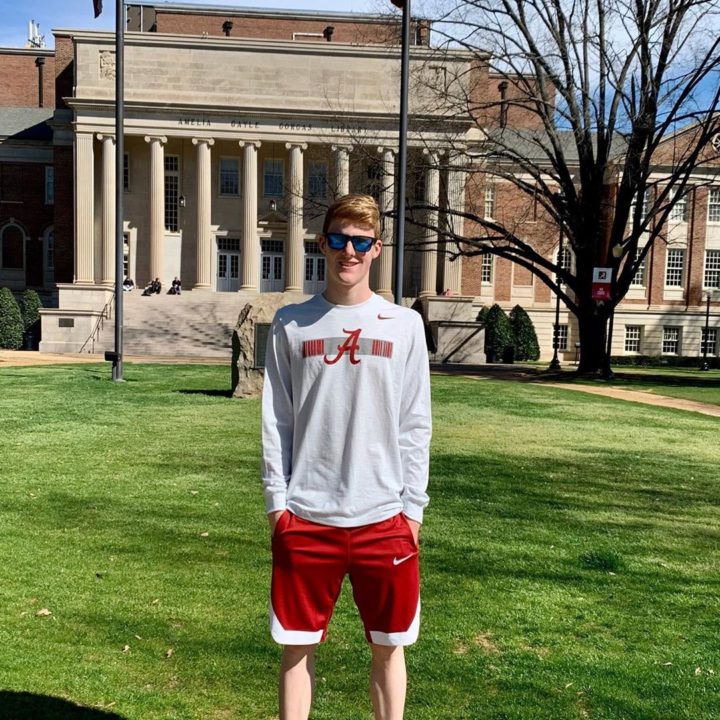 Despite being a top-ranked recruit at Alabama, Braden Rollins couldn't ignore his intuition, changing course and joining the military.

Braden Rollins was just looking for some good exercise. Instead, the two-time high school state swimming champion from Indiana happened upon a whole new career calling.

It all started when his best friend, John Bracher, convinced him to come to a Marine Corps workout soon after Rollins completed last year’s high school state championships.

“He was like, ‘We’ll give you a really good workout, just come with me,’” Rollins recalled. “So one Thursday I went and it was one of the hardest workouts I’ve ever done in my life. That just stuck in me, to see the brotherhood that the recruiters all had. For the next two or three months, that was all I thought about and I just went back and forth in my head. My best friend was right there with me helping me make the right decision.”

Rollins, who won state titles in the 50 free and 100 free back as a junior in 2020, was already committed to the University of Alabama’s swimming team. But the Boonville senior couldn’t ignore his intuition steering him into service.

“Along the way, I realized that school has never really been my thing and I’ve always wanted to serve our country and do something more than just what I wanted to do,” said Rollins, an honorable mention on SwimSwam’s list of the top 20 recruits in the class of 2021. “So I decided I should just follow my dream since I was a little kid and I said I’m just going to join the military.”

“Back in my old neighborhood that I used to live in when I was in elementary school, my friends and I would always have nerf guns and act like we were in the military,” Rollins recalled. “I just thought, man, I would love to do this one day when I grow up and make it be my job. I think it was those memories as a kid and realizing I could make a career out of it and have fun doing it at the same time.”

The Marine Corps fueled Rollins with a renewed sense of purpose. However, the tough decision to decommit last May meant leaving behind a promising future in Tuscaloosa.

“The atmosphere at Alabama was absolutely insane,” Rollins said. “Their team was so welcoming to me, they were so nice, the facilities were brand new, their coaching staff was phenomenal. I just loved it, but it’s nothing against them. I’d pick them any day over any other school, but the Marine Corps is just my way to go.”

In eight months as a member of the Marine Corps, Rollins has traveled all around the country, from South Carolina to North Carolina to Florida and even California, where he’s stationed currently as an aircraft mechanic. Soon, he’s headed back to South Carolina for a two-year stint in Buford. Each step of the way, his best friend has been right there by his side.

“Surprisingly, we stayed together the entire time,” Rollins said of Bracher. “We went through boot camp, schooling, and now we’re both going to Buford, South Carolina, for the next two years stationed together.”

Rollins isn’t sure yet what the future holds for his swimming career, but he has been missing the pool recently. He still tries to get in the water every week or two, but the 20-year-old wants to join a nearby club team or become an assistant coach to get more involved. Maybe a Military World Games appearance could be an option down the road?

Great article swimswam! Not everyone’s path is to swim in college. Braden’s swim experience led him to this path. I’m so excited and proud of him! #bestsport

You can still swim at the CISM Military World Games. Example. 50 LCM Free qual time is 25.05. The Marine Corps link is https://usmc-mccs.org/services/fitness/all-marine-sports/

Wow, this is so inspirational. You go Braden!

Congrats for forging your own path and not buying into “everyone must go to college” narrative. There are many paths to a happy and fulfilling life.

The US needs a greater military presence. Please encourage these young boys to join the army! Too many of them have fluffy hair and are doing tik tok dances for likes nowadays.

Where do you want to increase their military presence? Mars? They’re already everywhere else…

Perhaps the poster wishes our military will become stronger with stronger men. Compare the recruiting marketing in the US, versus China and Russia. The US seems interested in diversity and political correctness, other countries seem more concerned with resolve.

It is impressive in that it is fighting against a country funded by Trillions of US dollars and military equipment AND other NATO countries which have been misled by the western woke media and government.

If Caeleb is still looking for a renewed sense of purpose (and a fresh perspective), he might consider following Rollins’s lead.

Good for him for figuring out what he wants to do and for going after it with the same passion any of us would want from a swimmer. He’ll learn a lot of valuable skills as a young aircraft mechanic, and his squadron will benefit from having a Marine like him on the team.