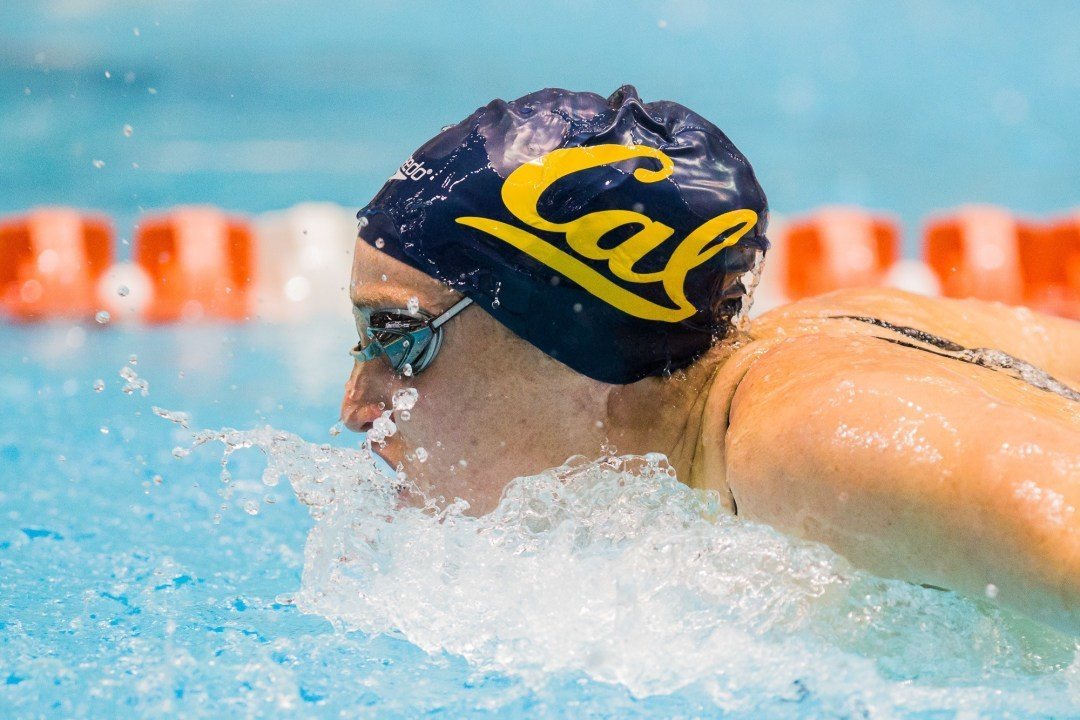 Cal transfer Sophia Batchelor is eligible to swim for Florida in the spring semester of 2015. Archive photo via Tim Binning/TheSwimPictures.com

While Florida head coach Gregg Troy is declining to comment on whether newcomers Sophia Batchelor and Amelia Maughan will compete this weekend against Florida State, the two are both eligible to compete in the spring semester of 2015, according to a team spokesperson.

Whether those first races come this weekend or later in the semester, their additions at any time between now and March make the Florida women legitimate NCAA title contenders (though, they won’t impact our power rankings until they’ve swum their first races).

The two join Theresa Michalak, who says she is swimming this weekend, in huge mid-year pickups for the Gators.

Batchelor is a New Zealand native who is transferring to Florida after one season spent with the Cal Golden Bears. In her freshman season at Cal, Batchelor finished 16th at NCAA’s in the 100 fly individually, 21st in the 200 back, and 17th in the 200 fly, while also splitting a 51.62 in the 100 fly in prelims of the 400 medley relay. That split was the fastest of any butterflier among teams who made the A-Final, though Batchelor was still replaced by Rachel Bootsma in finals.

The Florida 200 and 400 medley relays graduated both breaststroker Hilda Luthersdottir and butterflier Elise Zalewski off of last year’s team, where both finished in the top 4 at NCAA’s. Adding possibly Michalak, and almost definitely Batchelor, to those relays along with Sinead Russell on the backstroke allows sophomore star Natalie Hinds to remain on the Gators’ freestyle leg. That’s a relay that can once again contend with the likes of Tennessee, Cal, Stanford, and Georgia for the NCAA relay titles, and might even become a favorite depending on how well the international swimmers adapt to yards swimming.

The other addition, Maughan, is not yet as well-known internationally as Batchelor and Michalak, but she’s heading that way and is still a huge addition. She was a member of Team England at this summer’s Commonwealth Games that included spots on both the 400 free relay that took silver (prelims swimmer) and the 800 free relay that took bronze (finals swimmer).

In long course, Maughan has best times of (converted times in parenthesis):

Those are all immediate-impact times, and she might just be the piece that Florida needs to get on top of the podium in March.

Florida didn’t have a very big class of incoming American freshman this season, indicating that coach Troy might have something up his sleeve. Including transfers and red-shirt freshmen, 7 out of 11 new competitors for the Gators are internationals (7 out of 8 if we exclude divers in the tally).

While Troy has been mum about when the influx of talent might officially begin competing, Batchelor was at home in New Zealand over the Christmas holiday.

That is the reason people are calling the SEC Champ meet, the Southeastern European. Championship . Check last years mens A finals,

If you are an American swimmer with times that would elicit the same scholarship level as the international student-athletes that swim for any D I or II institution and score at the NCAA meet, you are not going to miss out on a scholarship spot somewhere. What’s next, limiting the number of “internationals” that can advance to Finals at NCAA’s? You know, so more Americans can be NCAA Finalists.

Exactly! College swimming at the highest levels is about fielding the fastest possible team, not about which nationality is on your passport. You don’t think that Florida and Auburn and Georgia didn’t try and recruit Andrew Seliskar or Ryan Murphy or David Nolan? You don’t think they went after Missy Franklin and Simone Manuel and Katie Ledecky? If you’ve got one scholarship spot left, and have no one left to recruit stateside but a girl who goes 27.0 in the 50m free but you’ve got a European girl who goes 25.0 knocking on your door and saying she wants to swim for you, are you going to tell her no? I guarantee you that Gregg Troy and Brett Hawke and… Read more »

Seems to be happening a lot these days. D-1 schools filling their teams with a lot of international swimmers. I believe Michigan for example has several on the men’s & women’s team. Wish there was a limit that were allowed, to ensure spots for all our great American swimmers!

I’ve only been following College Swimming for a couple of years, can someone tell me if mid season transfers like this are common? I agree with CT Swim Fan, the eligibility timeline seems strange.

The end of the article was also a little troubling. There are some exceptionally fast HS and Club swimmers coming out of Florida and yet “7 out of 11” new swimmers for Florida are International. I don’t necessarily disagree with International swimmers coming to college in the US and swimming but maybe there should be a limit on how many slots can be filled by them, especially on a Public state University team. I wonder how many Florida swimmers are having to go elsewhere to… Read more »

Can someone explain to me how someone who participated in the NCAA meet last spring, is eligible to swim now. I thought transfers had to wait a full year before participating.

Only if they’re transferring within the same conference. Batchelor is moving from the PAC-12 to the SEC. No need to wait if Teri granted her an immediate release.

Weirdo – GOOD POINT! You definitely made an indisputable argument there. I ‘really’ like how you backed it up with facts too. More commenters could learn from your style in this forum.

Don’t hate on Florida because you’re scared! Let swimming do the talking, UF haven’t spoke up which is the right thing to do

I agree, I’m puzzled as to why Florida should be considered title contenders after these additions. Florida was 6th last year, almost 300 points behind Georgia. They have a long way to go to win a NCAA title.

The addition of Michalak, Batchelor and Maugan will help fill the holes in Florida’s lineup, especially having a sprint butterflier who isn’t Natalie Hinds and freeing up Lindsey McKnight from breaststroke duty. But there’s always uncertainty in bringing foreign swimmers in and just taking a straight conversion from their LCM to SCY times. The most recent example of this is Marina Garcia at Cal, who did not end up being the breaststroker that they needed for their medleys last season. Michalak will… Read more »