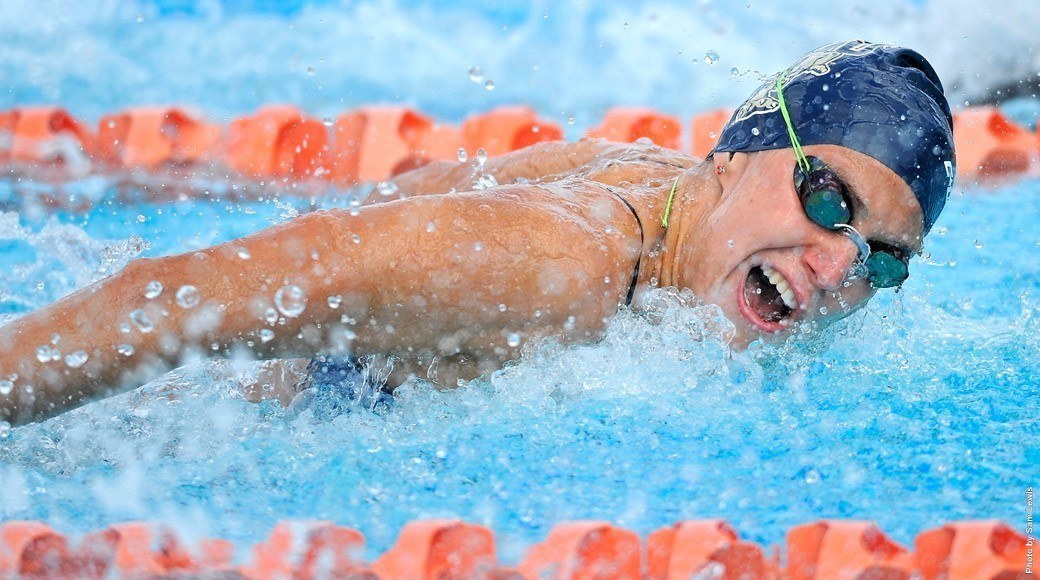 The FIU swimming and diving program took first in nine of the 16 events and opened the season with a lopsided 164.5-115.5 victory over visiting Miami (Fla.) Saturday at the Biscayne Bay Aquatic Center. Current photo via FIU Athletics

The FIU swimming and diving program took first in nine of the 16 events and opened the season with a lopsided 164.5-115.5 victory over visiting Miami (Fla.) Saturday at the Biscayne Bay Aquatic Center. The dual win avenged one of only three losses the Panthers suffered last season (10-3 in 2016-17) and gets the team off to a 1-0 start.

In her first collegiate meet, freshman Rachel Foord (Melbourne, Australia) posted an NCAA qualifying mark by scoring 290.47 in the 3-meter springboard. Senior and defending Conference USA Diver of the Year Rebecca Quesnel (Burlington, Ontario, Canada) took the top spot in the 1-meter, posting an NCAA qualifying mark of 289.57 from her season-opening program.

“We had a complete team effort today,” notes FIU Head Coach Randy Horner. “The ladies stepped up and competed well. We beat a very good Miami team. This could be the best FIU team we have had.”

The Panthers will split the squad for next weekend’s action, with some competing at North Florida against the Ospreys and Georgia Southern in duals and others participating in the FIU Fall Classic, a seven-team home event that starts at 4 p.m. Friday and concludes with Saturday action, beginning at 11 a.m.

The University of Miami swimming team dropped its first dual meet of the season Saturday afternoon, falling on the road to crosstown foe FIU, 164.5-115.5.

Competing without its diving contingent due to continued maintenance on its home pool after Hurricane Irma, Miami had a number of strong performances in its second competition of the fall.

One of those freshman, Annie Kyriakidis, posted the first two wins of her college career in the matchup.

Viguier, coming off a summer where she represented France at the World University Games, also won the 500 freestyle in commanding fashion. She touched the wall in 4:57.44, almost seven seconds faster than Kyna Pereira of FIU (5:04.07).

“We got some great performances out of our youth,” Kershaw said. “Annie was a double winner and Manon also got two wins. She’s just a sophomore, so I thought some of our younger swimmers really stepped up today.”

Kershaw said he liked what he saw from San Nicolas and fellow freshman Chandler Sensibaugh, who took second in the 200 fly in a time of 2:09.34.

Other solid finishes included sophomore Clair McGinnis taking second in the 1000 free (10:41.95), sophomore Iliana Oikonomou with a second-place showing in the 50 free (23.93) and senior captain Julie Suarez finishing in second in the 100 free (51.69).

“We’ve got to keep moving forward. We have to get better from here. I think the team is clearly on board with that, as we set up their goals,” he said. “We want to get wins along the way, but I think we’re still doing a good job of keeping our focus on the ultimate goal.”

Miami continues its regular season schedule on Friday, Oct. 13 at the SMU Classic. The host Mustangs will be competing in the event alongside Miami, Louisville, Michigan, Southern California and UCLA.