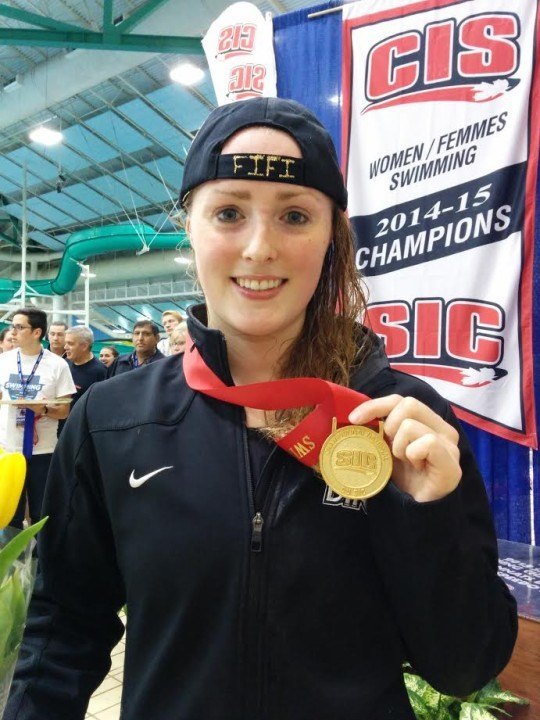 After breaking the Irish record in the 100m breaststroke yesterday during the prelims of the 2015 CIS Championships, she did the exact same on day two, smashing her own short course 200m breaststroke record. Archive photo via Ali Lee/University of Victoria

After breaking the Irish record in the 100m breaststroke yesterday during the prelims of the 2015 CIS Championships, she did the exact same on day two, smashing her own short course 200m breaststroke record.

The previous record was a 2:24.17 set at last year’s CIS Championships in Toronto. Doyle took a jackhammer to that mark, swimming a 2:23.64 to knock just about half a second off her previous record.

That time sets Doyle up for another win here in Victoria. On day one, after breaking an Irish record in prelims, Doyle absolutely dominated the field in the 100m breaststroke long course final sporting a FINA ‘A’ time.

This morning she had about two and a half seconds on her teammate, Tianna Rissling, who was second overall in 2:25.93.

Doyle will also have to battle it out with defending 200m breaststroke CIS Champion Tera Van Beilen, who finished fourth overall this morning with a time of 2:28.07.