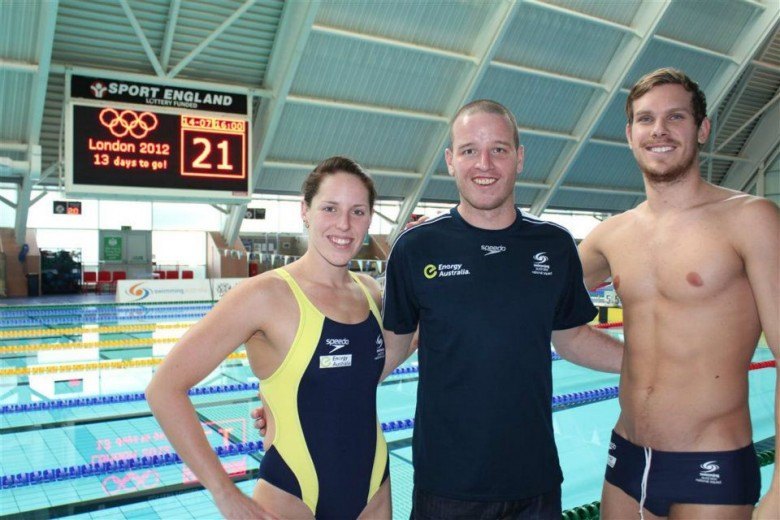 Alicia Coutts (left) is among a big Australian contingent that will pick up this meet in Singapore. Current photo via Swimming Australia / Delly Carr

The meet, which begins on Tuesday, November 5th, will begin the third-and-final Asian leg of this tour, with a much smaller break from leg two (Russia/Middle East) than we saw between leg two and leg one (Europe).

There will only be two Americans in Singapore. One will be Anthony Ervin, and the other will be 2013 breakout star Eugene Godsoe. Tom Shields, who swam incredibly well on the Middle Eastern leg, is skipping Singapore, but on last word planned to rejoin the tour later this week in Tokyo, Japan, and swim to Beijing China.

The big American influx will come at those two meets, when a group of junior swimmers will join the tour.

There will be a few more Asian swimmers at this meet, but not the probable huge influx of Japanese and Chinese participants that we’ll expect in Tokyo and Beijing.

The Australian roster, with this begin the closest meet to them geographically, has grown a bit. Emily Seebohm is still racing, Bobby Hurley is still racing, Kenneth To (who is in line for huge series prizes) is not, but the overall group will grow. Christian Sprenger will swim this round of meets; he raced the European legs and did very well. So to will teenager Madison Wilson. Other young swimmers like Mitchell Pratt, Regan Leong, Mitch Larkin, and Emma McKeon join the roster, but the real excitement is behind the true superstars who will join the series for the first time.

Cate Campbell, Bronte Campbell, Alicia Coutts, Brittany Elmslie, Tommaso D’Orsogna, and Thomas Fraser-Holmes will all be racing. Australia’s already lined out their mixed 200 medley relay for the first day, with Ash Delaney, Seebohm, D’Orsogna, and McKeon. That could very well break France’s World Record, and that’s just the prelims group. If they go Bobby Hurley, Christian Sprenger, Alicia Coutts, and Cate Campbell in finals, they will demolish the mark and really make this a respectable record.

Other countries sending solid lineups include the Brazilians (Guilherme Guido, Felipe Lima, Graciele Hermann, and Larissa Oliveira) and the Brits (Roberto Pavoni, Hannah Miley, Siobhan-Marie O’Connor, Sophie Allen, Fran Halsall, Lizzie Simmonds, James Guy, and Michael Jamieson). It doesn’t look like the Brits were able to muster the enthusiasm for a relay, however.