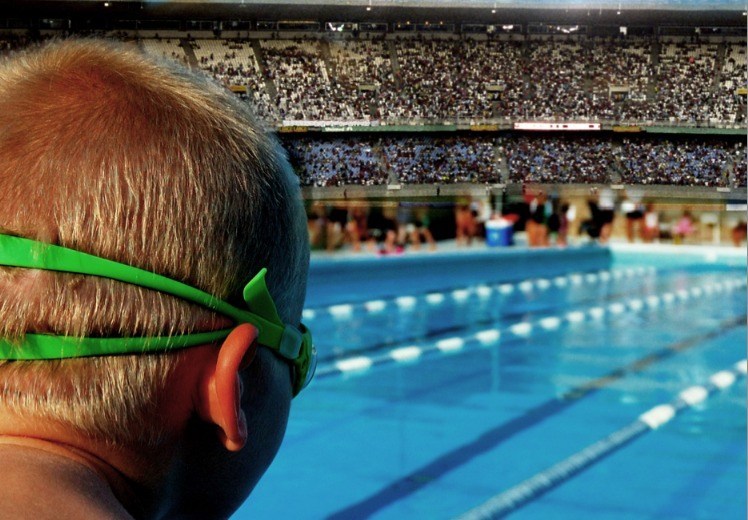 "In November of 1975, the hotel convention room in Santa Ana, California was packed with young swim coaches attending USC Coach Peter Daland’s Western States Coaches Clinic. They sat eagerly, waiting to learn from experienced coaches, several of whom were among the best in the world. The 1976 Olympic year was underway..."

In November of 1975, the hotel convention room in Santa Ana, California was packed with young swim coaches attending USC Coach Peter Daland’s Western States Coaches Clinic. They sat eagerly, waiting to learn from experienced coaches, several of whom were among the best in the world. The 1976 Olympic year was underway. America’s prospects were extraordinary, particularly in men’s swimming. Thirty-two year old Coach Bill Rose was introduced and stepped to the podium at the front of the room to begin his presentation. Rose had recently moved from his head coaching position at The University of the Pacific to take over the same role at what had quickly become one of the largest clubs in the United States; the DeAnza Swim Club.

Prior to commencing his assigned subject matter for his talk, Rose presented a challenge to the swimming world. His star swimmer, Mike Bruner, had completed the team’s Swim-A-Thon the previous week. Bruner accepted his coach’s challenge to double the common distance swum of 5000 yards, and instead, complete 10,000 yards and swim each 100 faster than an average of 1:00. Bruner had succeeded and Rose gleefully told the audience his 1000 splits, as well as his times for each 1650.

Coach Rose mixed humor with theory throughout his presentation. He explained that upon his relocation to DeAnza he attempted to open a bank account at a local institution. The banker looked at his occupation written on his application and asked, “So you’re a swim coach. What do you do during the day?” Rose muttered to his coaching audience,  “With 600 swimmers on my team (at DeAnza), believe me I have something to do during the day!”

Striving to be the very best on earth drove Coach Rose in those days, just as it does today.  In 1976, Mike Bruner failed to make the USA Olympic Team in his specialties’ of distance freestyle.  But during the competition his frustrated coach hurled a paper at him written by his 11-year old teammate, Karen Crouse. The essay pointed out to Mike that a little girl believed in him and had always thought of Bruner as a butterflyer.  Bruner responded by making the Olympic team in an “off event” the 200-meter butterfly. Four and one half weeks later he proceeded to ring the starting bell to the greatest performance by a men’s team in the history of the Olympic Games when he led a 1-2-3 sweep by the Americans.

A ten-year stint as a stockbroker took Bill Rose out of coaching completely. But when he’s been in coaching, he’s been all in. It was 1992 that the second ‘coming of the Roses began.’ That year he returned as the head coach of the famed Mission Viejo Nadadores. The club had experienced a downturn in club size, depth of quality swimmers and elite performance from its dominant years from 1975-1984.

In the 1990s, the USA experienced a long struggle to compete on the international stage in men’s distance swimming. When Bill Rose returned to coaching he brought back with him his love of distance training and racing. In 2004, he coached Larsen Jensen to an improbable sliver medal finish in the 1500 freestyle at the Athens Olympics. Jensen was two weeks shy of his nineteenth birthday and set an American Record (14:45.29) that still stands today. In 2008, Mission’s Chloe Sutton earned a spot on the open water USA Olympic Team and her coach was appointed America’s head coach. In 2012, Sutton returned to the team, this time in the 400-meter freestyle. In addition to achieving elite performances, Rose and his staff have rebuilt the club from their Swim School to Masters. The Mission Viejo membership now is even larger than his team was at DeAnza..

If there has been a secret to the resurgence of Mission Viejo, it may be in the value placed on the development of age-group swimmers. Bill’s wife Siga, was Head Age-Group Coach at Mission from 1981-86. Siga presently swims with the masters group as a world-class distance swimmer and holds the title “8 and under Division Director” in the pyramid of progression that the coaching couple has developed at the Nadadores. Her history suggests that she is one of the finest age-group coaches in the world. The Roses have made an extraordinary tandem—perhaps an American hint of the Australian legendary Carliles, Forbes and Ursula.

Rose currently coaches a small army of talented swimmers, that are becoming world class. They include a band of teenage boys that are faster than 4:00 in the 400-meter freestyle to up and coming butterflyer  Katie McLaughlin (2:08.72), and Rose has the good fortune of team leadership provided by New York post grad open water champion Ashley Twitchell.

Coach Rose can be bold, but does so with a purpose. His challenge to the swimming world when he made public Bruner’s 10,000 was also a challenge to himself and Mike to out train anyone in the world. Acts like that are not so much to satisfy his ego, but because Bill Rose loves the process of preparation and he knows that to do it in a vacuum wouldn’t be nearly as much fun—for him or for anyone else. This personality trait has caused Bill Rose to make other swimmers and coaches in the USA, and around the world, train harder, race faster and thereby contribute to an escalating spiral of competition that has advanced the sport of swimming throughout the world.

While many coaches in America have flocked to collegiate coaching and a seemingly easier lifestyle, greater job security and a chance to pick over the world’s top talent, the Roses continue to build swimmers from the proverbial cradle to the grave. At 70 years young, Bill Rose walks the pool deck today anxious to prepare his swimmers for another Olympic year in 2016.

When the Rio Olympics open it will have been four decades since Bruner’s success in Montreal in 1976. You can bet that Bill Rose will be coaching swimmers that are competing for medals. And Siga will be by his side. While coaches around the world can help an athlete grow during their period of time coaching them, the Roses have positioned themselves to transform lives over fifteen years or more.

The American Swimming Team is blessed to have the Roses on their squad. They practice what they preach—endurance in the pool and in friendship. But their experience also tells them that world class swimmers come from a developmental program that creates a skill set that allows them reach a world class level and, like their coaches, stay there for a long, long time.

A few lessons from these two legends?

About a year and a half ago, Karen Crouse wrote about the Mike Bruner/Bill Rose story in the New York Times. The paper Karen wrote, the one which Rose handed to Bruner, was a school assignment. Not only did that paper motivate Bruner to gold, it also motivated Crouse to a career in writing. And now, she has to be on the short list of best swimming reporters out there.

What Crouse wrote about it is well worth reading:

Fantastic Dean! Thanks so much for passing that on!