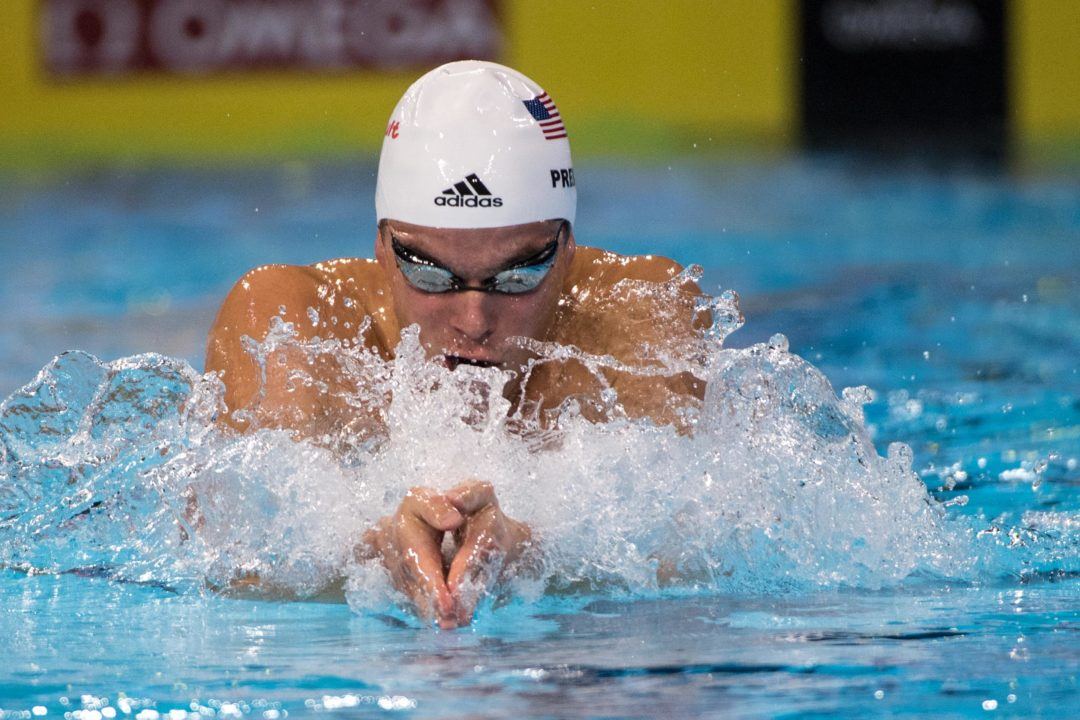 FINA says that the changes will make the stroke more accessible to fans and increase the speed, and therefore excitement, of races. Archive photo via Mike Lewis/Ola Vista Photography

We hope you all enjoyed our 2020 April Fools post. Breaststrokers, you can now all sigh a collective breath of relief.

As part of their continuing efforts to innovate the sport of swimming, FINA has announced dramatic changes to the breaststroke rules for the 2021-2022 season.

The rules were originally going to be voted on at the governing body’s next bureau meeting, which was scheduled to coincide with the Tokyo Olympics that were due to start in July, but with that event being postponed until 2021, FINA held a remote bureau meeting this week to vote on a number of important measures.

While most of the changes were administrative, the changes to breaststroke will fundamentally alter the stroke. Among the alterations will be the elimination of the need for a two-handed touch on turns, opening up the possibility of flipturns, and unlimited underwater dolphin kicks before 15 meters.

“We’ve watched some of the developments in the sport, and we’ve observed a move toward more speed in our competitions,” said FINA swimming technical committee member Lin Quanting of Hong Kong. The comment appeared to be a reference to the International Swimming League’s innovative format from last season that reduced the gap between races from about 15 minutes to about 4 minutes. “It is in that regard that we sought proposals from our member nations about how to make breaststroke, the sport’s slowest stroke, faster in coming seasons.

We intended to role out these changes this fall, but the delay of the Olympics has pushed that timeline back by one year.”

Lin did not name which country made this proposal, but did say that momentum for the idea did pick up steam last year after some high profile disqualifications.

“We want to present a good show for our fans. Besides making the stroke faster, it will eliminate the kind of disqualifications that our fans don’t want. Nobody wants to see a potential gold medalist disqualified in the heats.”

The committee also considered two other proposals for alterations to the stroke, including allowing more leeway to recover above-the-water and to replace the traditional “frog kick” with a more “dolphin-like” kick, but that those proposals were tabled over the implications that might have on individual medley and medley relay rules requiring athletes to use a unique stroke on each leg of the race.

“It is the committee’s interpretation that breaststroke done without the signature frog kick and with an above-water recovery would too closely resemble the backstroke, and therefore would be in violation of rules regarding repetition of strokes in the medley events,” a FINA statement said regarding those proposals.

Not everyone has been as supportive as the changes, however, as some have questioned the need for the change.

The changes are the most dramatic to the stroke since 2015, when breaststroke was briefly reclassified as a discipline of artistic swimming (then called synchronized swimming).

I heard a reporter from the Washington Post tried to get Lilly Kings comment about this. LMAO!!!

Going from multiple dolphin kicks into the stroke will look very awkward and the reason it’s a two hand touch is because it’s a two hand simultaneous motion. It’s going to look ridiculous and take away the beauty of the stroke.

Please let this be a joke

Well done Braden. You really went all out on this one.

I remember watching John Hencken win Olympic gold in 1976 without dolphin kicks,” my 72-year old former high school swim coach said when learning the news. “If John didn’t need them to win gold, I don’t know why we should add them now
https://thammyxinh.vn/9-dieu-can-luu-y-khi-hoc-nghe-spa/