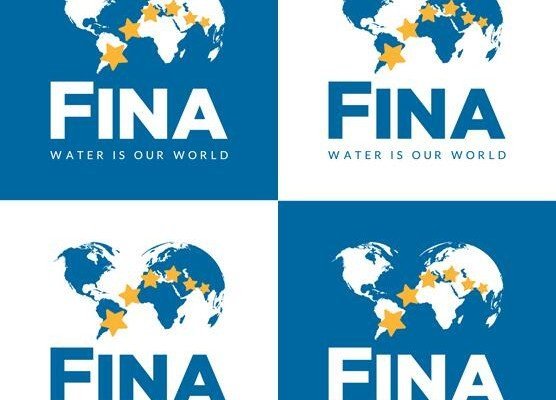 FINA has unveiled their newly re-styled logo, above. The changes are subtle, but overall tend toward a more modernized look. Current photo via FINA

Earlier this year, FINA announced alongside some other much more significant administrative changes that it was undertaking some minor alterations to its logo, and today the century-old organization unveiled that new look. Above are the new iterations of the logo, as compared to the old version that can be seen below.

The differences are subtle, but quite clear. While they’ve maintained the idea of the stars going through the conformal projection-style map of the world, there’s now 6 stars instead of 5. That’s likely a reference to now 6 disciplines sponsored by FINA, instead of the former 5 (high diving was added in 2013 to diving, swimming, open water swimming, synchronized swimming, and water polo). The western hemisphere has also been slightly reoriented. The map overall has more detail, and less of it is obscured by the stars, which gives a cleaner, more modern feel to the logo.

Iceland also makes its first appearance on the new map, while Antarctica disappears, and there’s a little more detail in the Indonesian area of Southeast Asia – those are the only really major geographic improvements.

The FONT is where the differences really start to become obvious. There’s less overlap between the letters,  and they’re all now capitalized both in the “FINA” and in the “WATER IS OUR WORLD”. This again makes the logo feel more modern. The whole thing has been reoriented as well, so that it fits better into a square than a tall rectangle. This is probably indicative of the internet era, where services like Facebook, Instagram, and WordPress demand more flexibility in images, and starting with a square allows for that greater flexibility.

FINA also unveiled an inverse logo via their Twitter account today. While this may have just been done for promotional purposes, it would again allow a lot more flexibility.

So what’s the vote? In our opinion, the remake of the logo was a positive all-around. Even without looking at the details, it just feels cleaner, more modern, a better cut, and stylistically more appealing to the eye.

poor NZ! . the aussies must be having a good laugh

Did NZ get lost with Malaysia 370? CNN did not report that! they need to spend more time on that story! 😉

New Zealand’s not on the map, but I don’t think they disappeared – they weren’t on the original either.

One star for each continent?

Definitely a subtle change. Maybe a marginal improvement. Is it common knowledge in the aquatice community of what the 6 stars are supposed to represent (was 5 stars)? If so, please educate me, as I have no clue.

PAC12BACKER – 6 disciplines. With high diving added, they needed another star.

Look at the upper left hand corner of the FNA webpage
http://www.fina.org/H2O/

Does anyone else see the similarity for the “f” they use and the “f” that “facebook” uses?

Look at the upper left hand corner of the FNA webpage
http://www.fina.org/H2O/

Does anyone else see the similarity for the “f” they use and the “f” that “facebook” uses?