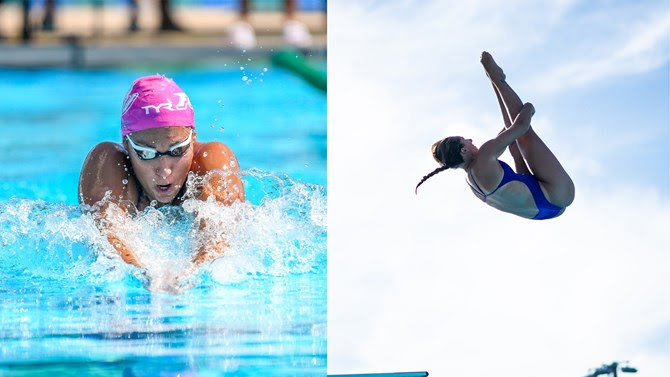 Senior Petra Halmai as named the CCSA Swimmer of the Week while junior Reese Wakefield was named CCSA Diver of the Week. Current photo via FGCU Athletics

CHARLOTTE, N.C. – Following a big week in the pool and in the air, the FGCU swimming and diving team saw two athletes being honored with CCSA weekly awards.

“Congratulations to Petra and Reese on being named their respective, ‘of the Week’ award winners,” said head coach Dave Rollins. “This was a really impressive week from the CCSA, with lots of impressive performances at every meet, even inside our own team it was a challenge to come up with nominations. Exciting to receive the recognition and looking forward to the remainder of the season.”

Neither lady is a stranger to earning their respective awards as this is the seventh honor in Halmai’s career while for Wakefield, it is the ninth. This is also the second time this season an Eagle has won Swimmer of the Week after Wiktoria Czarnecka did so to open the year on September 28.

Against Vanderbilt over the weekend, Halmai won both the 100 and 200 breast with times of 1:03.42 and 2:17.67, respectively, both of which are top times in the CCSA this season. She is more than a second ahead of the next-best time in the 100 breast while she is more than four seconds ahead in the 20 breast.

Wakefield had a strong day in her first meet of the season as she won the 1m with a score of 268.95 points, more than 20 points ahead of the next-best CCSA score. She also finished second on the 3m with a solid score of 250.20, which is third-best in the CCSA this season.

Halmai, Wakefield and the rest of the Eagles will return to the pool on Friday when they travel to Miami to take on the Hurricanes. The meet is set to begin at 4 p.m.