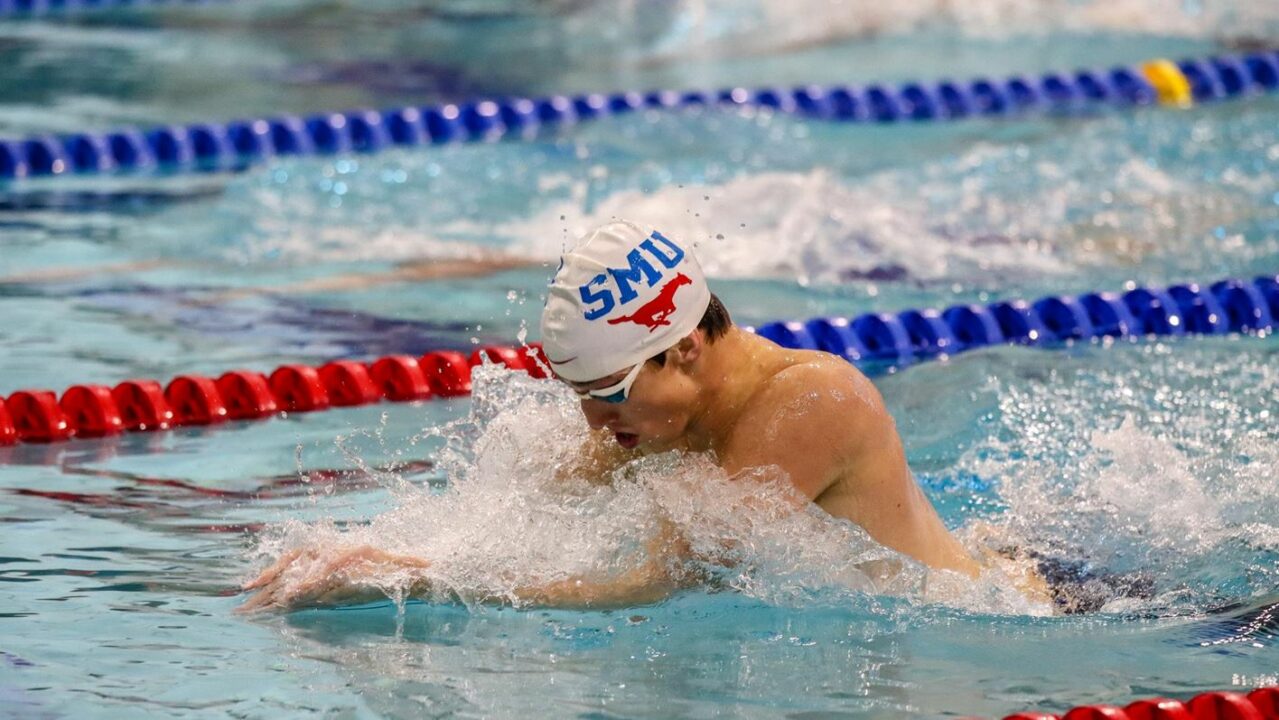 Colin Feehery became SMU's fastest all-time performer in the men's 200 freestyle (1:34.48) as the Mustang men rolled to a 207-93 win over TCU. Archive photo via SMU Athletics

DALLAS (SMU) – The SMU women’s swimming and diving team won 11 events in a 158.5-139.5 win over Metroplex rival TCU at the Robson & Lindley Aquatics Center and Barr-McMillion Natatorium on Friday night.

Nicole Stambo swept diving action, taking the top spot on 1 meter with an NCAA Zone score of 268.95 and leading the field on 3 meter with a six-round 267.90.

Watson (2:02.64) and Parkinson (2:02.83) came back in the 200-yard individual medley combining for the 1-2 finish to keep the Mustangs ahead in the team score going into the final relay. The time for Parkinson was a career best.

Napoletano, Indra Vandenbussche, Tiffanie Ruan and Gudmundsdottir secured the victory with a win in the closing 400-yard freestyle relay, clocking in at 3:20.33.

The Mustangs opened the evening with a runner-up finish in the 200-yard medley relay as Leguizamon Leal, Lewis, Becerra and Gudmundsdottir combined for a season-best 1:40.53.

Frederica Kizek was SMU’s highest finisher in the 1,000-yard freestyle, placing third in a time of 10:09.89, while Annabelle Corcoran finished fourth in the 500-yard freestyle at 5:01.67.

Up next, select Mustangs will compete at CSCAA Open Water Nationals Dec. 18, and divers head to the Georgia Diving Invite Jan. 3-5. SMU returns to the pool as a team Jan. 13-14 when it hosts Tulane, UNT and Rice.

SMU opened the meet with a first-place finish in the 200 medley relay with Cole Bruns, Lance Butler, Riley Hill and Justin Baker combining for a 1:26.00.

Colin Feehery, Sage Sungail and Jack Forrest claimed the top three spots in the 200 freestyle. Feehery became SMU’s fastest all-time performer in the event with a time of 1:34.48 and earned an NCAA B Cut. Sungail swam a time of 1:36.27 and Forrest touched the wall at 1:38.83.

Feehery earned his second NCAA B Standard of the night in the 200 breast after touching the wall at 1:54.75. Angus Corbeau posted a career-best time of 1:56.21 for a runner-up finish and an NCAA B Mark.

Dominic Hoefer took the top spot on 3 meter with a six-round NCAA Zone score of 350.93, on 1 meter, he claimed first place with a 315.68 Zone score. Teammate Peter Smithson posted a Zone-qualifying 337.58 to finish second on 3 meter.

Sungail, Hill, Evan McCormick and Feehery earned first place in the 400 freestyle relay with a time of 2:54.98 to close out the night for the Mustangs.

Up Next
Mustang divers are back in action at the Georgia Diving Invite Jan. 3-5. SMU swimmers compete at Boston College on Jan. 4.

DALLAS — TCU Swim and Dive competed in their final dual meet of 2022 at SMU on Friday falling just short to the Mustangs at the Robson & Lindley Aquatics Center and Barr McMillon Natatorium.

Another day another record was broken by the sophomore. This time, Freri broke a record, he previously held in the 1000-yard freestyle. He touched the wall in just 9:06.34 to win the event. Freri continued his dominance in the 500 freestyle, winning his second event of the day.

Other Frogs swam top times as well. First, freshman Edgar Cicanci earned his first B-cut of the season in the 200 back with a time of 1:44.61, winning the event.

The women’s team fell just short of the Mustangs in a match-deciding last race. The Frogs had some strong performances in each event.

The women’s team got started in the first event of the evening reigning victorious by way of the 200 medley relay. Rylee Moore, Claire Chahbandour, Jeanne Dahmen and Olivia Rhodes clocked in at 1:40.34 finishing first.

Individually, Moore and Chahbandour won their events in the 100 backstroke and the 100 breaststroke respectively.

In the women’s 500 freestyle the Frogs finished one, two and three with Kara Church, Jordan Edwards, and Abigail Meder taking over the podium. Edwards and Church continued their winning ways placing first and second respectively in the 1000 freestyle.

On the men’s side, Jadon Wuillez swam his way to a first-place finish in the men’s 100 breaststroke.